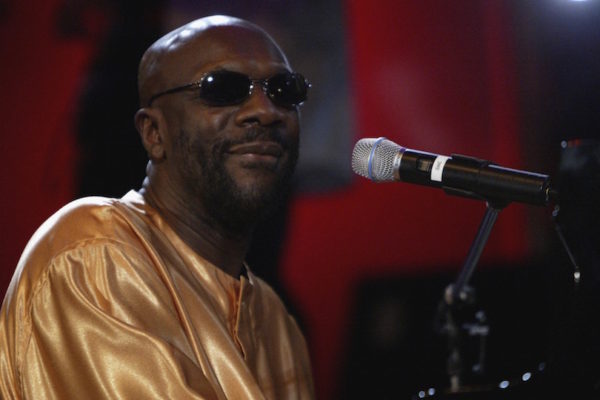 Truly epic, Craft Recordings’ no-holds-barred 4-CD hardbound box set Isaac Hayes – The Spirit Of Memphis (1962-1976) pulls together nearly all of Issac Hayes’ important productions and solo records in one place, thereby leaving the listener unquestionably funkified by the end. For while Hayes’ “Theme From Shaft” — which laid the blueprint for symphonic soul — is rightly remembered as the centerpiece of his career (and wow, has it aged well), there are also so many touchstones to this man’s career that a collection of this magnitude is more than appropriate: it’s necessary.

Like so many other great R&B/rock musicians, Hayes cut his musical teeth in church, which means his gospel roots are nearly always evident, even amid the bedroom funk that became his calling card. By 1965, he was a highly-regarded back-room player for Stax Records, where his keyboard work, as well as his skill as a producer-arranger, made him the Memphis equivalent of Leon Russell. Teaming up with fellow songwriter-producer-singer Dave Porter, he crafted a string of hits for Sam & Dave that consistently made the top-10 on the R&B charts and often crossed over on the pop charts as well. “Hold On, I’m Comin’,” “And I Thank You” and their kin are naturally represented but so are a raft of other extraordinary, cracking sides by the likes of Johnny Taylor, William Bell, and The Emotions.

By 1967, Hayes was beyond ready to go solo which he did by cutting the jazzy Presenting Issac Hayes — released by Stax that very same year. Why this first album did not click sales-wise remains a bit of mystery. As is, it remains the wondrous missing link in his rich discography. An excellent and rare track called “Precious, Precious” conveys an intimate jazz-trio feel while burning with a low-key self-assurance, while “You Don’t Know Like I Know” foreshadows the vibe that was to engulf his next few albums.

Interestingly, Hayes’ real breakout as a solo artist came courtesy of his unforgettable covers of “By the Time I Get to Phoenix” and “The Look Of Love” in 1969 and 1970 respectively. These highly-sophisticated arrangements slowed down the pace and pushed up the strings and horns, then layered in Hayes’ wholly-original semi-spoken vocal delivery. Let me be clear here: the vocals are Gospel-inspired testifying that have nothing to do with modern Rap. Sure, he later was nicknamed “The Rapper,” but Hayes’ style is musical in a melodic way that most contemporary rappers rarely if ever approach. Period.

Popular tracks from his quintessential releases Issac Hayes Movement, To Be Continued, and Hot Buttered Soul will please the crowd, but Disc 2’s hard-to-find Hayes/ Porter single “Ain’t That Lovin’ You (For More Reasons Than One)” b/w “Baby I’m-A-Want You” are what make this box set a collectible that has the strange power to convert casual listeners into superfans.

Always a man of his times, Hayes knew that his extended grooves were practically custom-built for the new, progressive FM radio formats, and his long versions of cuts such as “Never Can Say Goodbye” and “Walk on By” are well-represented on Discs 3 and 4. Even more engaging is previously-unreleased material like the remarkably extended take of “Ain’t No Sunshine” and a newly-unearthed “I Stand Accused”. Brilliant stuff

PS. Jesus rocked the jukebox on these hit songs. Plus, how Louis Armstrong’s influence has extended through the years and all forms of music.

0 comments on “Isaac Hayes Invokes the Spirit of Memphis”