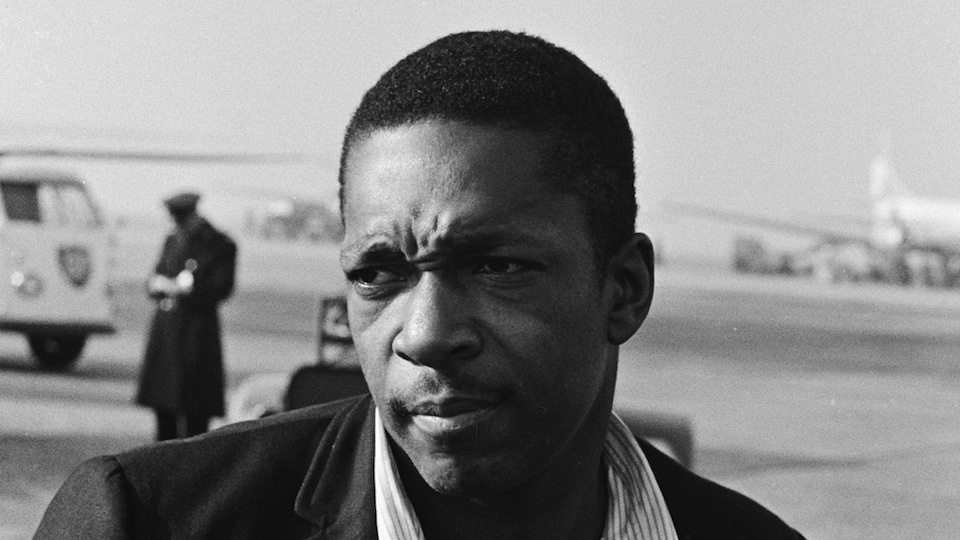 Once in a rare while, a musician will combine musicality and spirituality and deliver something for some that becomes a religious experience.

John Coltrane was born at exactly the right time and exactly the right place, in 1926 and in North Carolina, and under oppressive circumstances. His humble beginnings stemming from being raised in a religious household would color his later efforts. His grandfather, father, grandmother, and aunt all passed away when Coltrane was entering his teenage years, which severely impacted the family both emotionally and economically. But being born in 1926, he was exposed the glory days of the big band era. And his locale led him to move to nearby jazz hotbed Philadelphia with his mother in 1943, who bought him an alto saxophone, which launched his interest in music.

He began playing in a local trio, but then enlisted in the Navy the day the Hiroshima atomic bomb was dropped on August 6, 1945. The war had all but ended by that time, and so he was transferred to Hawaii. There his musical talent was recognized, and he was assigned to the local base swing band, Melody Masters, where he created his first recordings of jazz standards.

A year later he was discharged from the Navy and returned to the lively Philadelphia jazz scene, which now included a style called Bebop.   This jazz style included a fast tempo and complex chord changes and modulations. He began his pioneering work in free jazz and modes, partnering with his mentor, jazz guitarist and composer Dennis Sandole (“Modern Music from Philadelphia”).

In 1955, Coltrane was called to join jazz legend Trumpeter Miles Davis, creating the “First Great Quintet”, along with Red Garland on piano, Paul Chambers on bass, and Philly Joe Jones on drums) from October 1955 to April 1957. That was followed by Coltrane joining Thelonious Monk at New York City’s famous Five Spot Café, playing in Monk’s quarter for six months.

Coltrane released his first album, Giant Steps in 1959. The title track is considered to have one of the most difficult chord progressions of any widely-played jazz composition. The style introduced the Coltrane Matrix (or cycle), which involved the use of substitute chords over common jazz progressions, now a standard part of jazz improvisation.

A year later, Coltrane formed his own quarter and appeared at both the Jazz Gallery and Village Vanguard in New York City. These engagements included some of the most experimental music that he had played, influenced by Indian ragas, modal jazz, and free jazz. In fact, during this period Coltrane’s improvisational style approached extremes that divided critics, leading to even being booed in his final tour in France with Miles Davis. Down Beat magazine labeled his music “anti-jazz”.

1962 and the years that followed were a time of super productivity for Coltrane, including on “Impressions” (1963), “Live at Birdland” and “Newport ‘63”. The released also balanced their experimental work reworked covers of jazz standards such as “My Favorite Things” and “I Want to Talk to You”.    This was also a time when he and his quartet released their best-selling and most famous album “A Love Supreme” (1964), which was a callback to his religious upbringing and his love for God.

In 1965, Coltrane began using LSD, which contributed to his later releases being trippier and more cosmic. That same year he assembled ten musicians to record a 40-minute collection of improvisations and solos called “Ascension”.

Although his colleagues were unaware, at this time Coltrane was also suffering from liver cancer during this time, which ultimately did him in. He died at the early age of 40 on July 17, 1967.

Despite leaving us soon, Coltrane’s legacy is substantial. He was inducted in Down Beat magazine’s Jazz Hall of Fame.   His LP A Love Supreme was certified gold in Japan (1972) and the US (2001). In 1982 he was awarded a posthumous Grammy for Best Jazz Solo Performance on “Bye Bye Blackbird” and then a Grammy Lifetime Achievement Award in 1997.   Finally, in 2007 he was awarded a special Pulitzer Prize for “masterful improvisation, supreme musicianship and iconic centrality to the history of jazz”. And you can also see a stained-glass image of John Coltrane depicted as one of the 90 saints in the Dancing Saints icon of St. Gregory of Nyssa Episcopal Church in San Francisco.

In celebration of 60 years since John Coltrane’s breakout year in 1958, a box set called Coltrane ’58: The Prestige Recordings was just released in both CD and LP format on Craft Recordings. The release features all 37 tracks he recorded for the Prestige label that year.  It’s a worthy offering to one of the all-time great jazz “saints.”