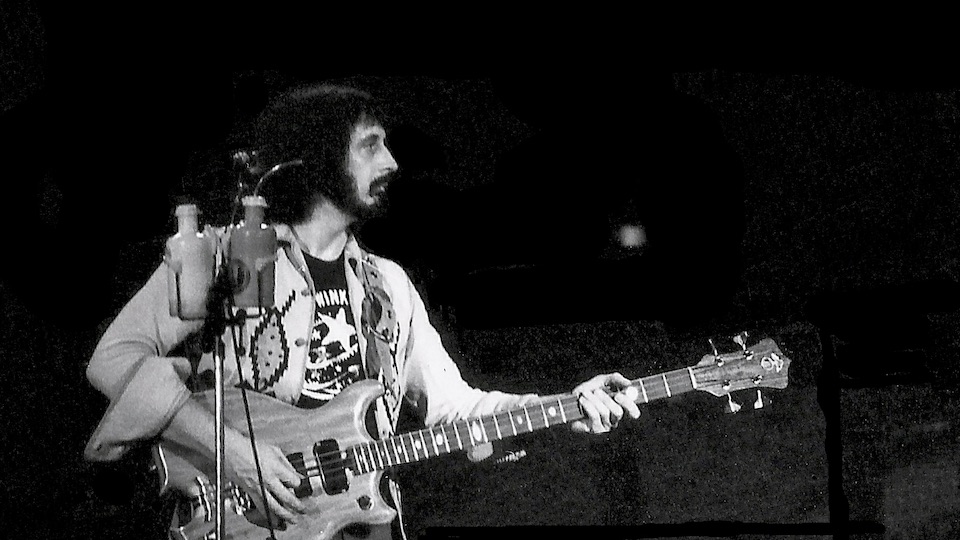 Welcome to 2021!  Although we’re a bit ahead of the official Chinese New Year, right now it’s unofficially the year of The Ox. And rock and roll had only one: “The Ox,” John Entwistle, legendary bass player for The Who.

Entwistle was born October 9, 1944, in Chiswick, just west of the Acton district of London where both Roger Daltrey and Pete Townshend grew up. His parents were musicians but divorced in John’s early years, leaving the boy to grow up shy and reserved. He was later known in the band as the “Quiet One.”

Entwistle met Pete Townshend while playing in the school band. John played trumpet (his father’s instrument), while Pete took up the banjo. Soon the pair began an after-school group called The Confederates, playing some blues and traditional jazz for assemblies at Acton County Grammar. John was fond of guitarist Duane Eddy, who had a string of instrumental hits in the mid-1950s. This created a desire in him to play a harder, more rhythmic type of music.

But alas, a trumpet did not fit early rock and roll. At first, he tried using an American football helmet as a mute to blend the horn’s sound. Eventually, he could see it was not working. “I just wanted to be louder. I got really very irritated when people could turn up their guitar amps and play louder than me. So, I decided that I was going to play guitar,” he later recalled.

John was not built for conventional guitar playing: he was a big kid (6 foot), with thick fingers. Listening to Duane Eddy’s sound, he decided to switch to the 4-string instrument. “Much of [Eddy’s] stuff was bass-influenced, and you could play most of it on bass.”

As the Entwistle family didn’t have money for an expensive bass guitar, he built his own. He purchased a large piece of mahogany and asked a local carpenter to prepare and shape the body like the popular Fender Precision model. The instrument was shaped with a Fender neck, but the frets were based on Hofner’s smaller violin-shape (think McCartney), leaving eight inches of unfretted wood at the top of the neck. It looked weird. “That (bass) looked like a football boot with a neck sticking out of it,” Roger Daltrey would recall. John did all the wiring for the pickups, along with painting the finished body. The homemade instrument ended-up sounding … pretty good.

John and Pete eventually joined up with the year-older Roger Daltrey, a guitarist leading his band The Detours. This is where the famous (and at times disastrous) dynamics of The Who began: Pete and Roger continuously at odds, John not getting involved. Townshend was known to antagonize those around him. Roger would strike out in retaliation at Pete, John would not even say a single word in reply to unkind comments. He was big and stoic, like an Ox. The nickname stuck.

Related: “Tour Managing for The Who Has Its Challenges”

An interesting parallel is found when comparing Entwistle’s place in the Who with George Harrison’s position within the Beatles. Both men were deemed the “quiet one,” both were virtuoso musicians. Each of them was relegated to one or two songs per album. Both would be the first to record a solo album outside of their famous act. In the power dynamics of their respective bands, they had a great influence within the group without getting in-between the other two egos. Entwistle and Harrison were counter-intuitive thinkers who had the latitude to take contrarian positions.

Once the band recruited the outrageous Keith Moon (and became The Who), Entwistle became the grounding anchor of the band – both musically and socially. On any given night, Pete and Keith could be out of their heads due to a variety of stimulants, leaving the band with no rhythm section. Being a musician’s musician, John stepped up and could be counted on to hold down the beat. He took professional pride in his appearance and was ultra-prepared every night.

At a gig toward the end of 1964, Pete mistakenly put the neck of his guitar through the low ceiling of the Railway Tavern in London. Rather than look like this was an embarrassing mistake, Townsend simply smashed the rest of the guitar on the stage floor, calmly reached for his spare, and played on. The crowd went wild. The following week they returned to the same club, but now the crowd was bigger, egging Pete on to do it again, which he obliged. Soon, Moon was getting into the act by smashing his drums. This “auto-destruction” become a staple of their stage act.

For his part, Entwistle was outraged, making it clear that he would never destroy musical equipment. He was angered by his bandmates doing such things to the instruments he revered. In video clips from those mid-60’s days, we can see the moment when the smashing starts. Entwistle quietly turns his back on the band and slowly walks away. The Ox had substance.

More than anything, John Entwistle loved to play and perform music on stage. While the other three members of the Who were swinging microphones, doing splits, and blowing up equipment, The Ox stood motionless (except for his “thunder fingers,” which moved miles a minute), looking like he wasn’t very interested in what he was doing. What he WAS doing was producing what we know as The Who’s live sound. His wall of Marshall amps created the brassy bass sound that enabled him to act as the band’s lead guitar in the early days (example: his solos on “My Generation”). Soon, Townshend would mimic John’s amp stack, and The Who would become known as the loudest band in the world.

But the Ox was not above enjoying the trappings of stardom. His 55-room hunting lodge, “Quarwood,” supported his taste for the dark and weird (like some of his songs). This 40-acre estate displayed various suits of armor, an effigy of Quasimodo hung on the wall, and a human skeleton reclined in a Regency chair. All of his Gold records could be found in the guest bathroom.

Perversely, he would publicly complain in the late ’90s that he held resentment for his time with the Who. Referencing the other band members’ antics, the wasted money from the “auto-destruction” days, and the start-stop nature of The Who’s work post-Moon’s death in 1978, Entwistle lashed out. “I wasted my whole F-ing career on The Who!,” he emotionally blurted to author Tony Fletcher. “I should be a multi-millionaire. I should be retired by now. I’ll be known as an innovative bass player. But that doesn’t… let me sit on my arse watching TV all day!”

The Ox was found dead on the morning of June 27, 2002, at the Las Vegas Hard Rock Café and Casino Hotel by the party girl he’d spent the night with. The Who was to start a tour the very next day. The tour was agreed to by Townsend and Daltrey at John’s request, in order to firm-up his finances. Authorities reported that his death was due to a heart attack induced by cocaine. “Sad though it is,” said Roger Daltrey, “if he could have written an ending for himself, it would have been very similar to the one he had.”

2 comments on “John Entwistle and The Year of “The Ox””