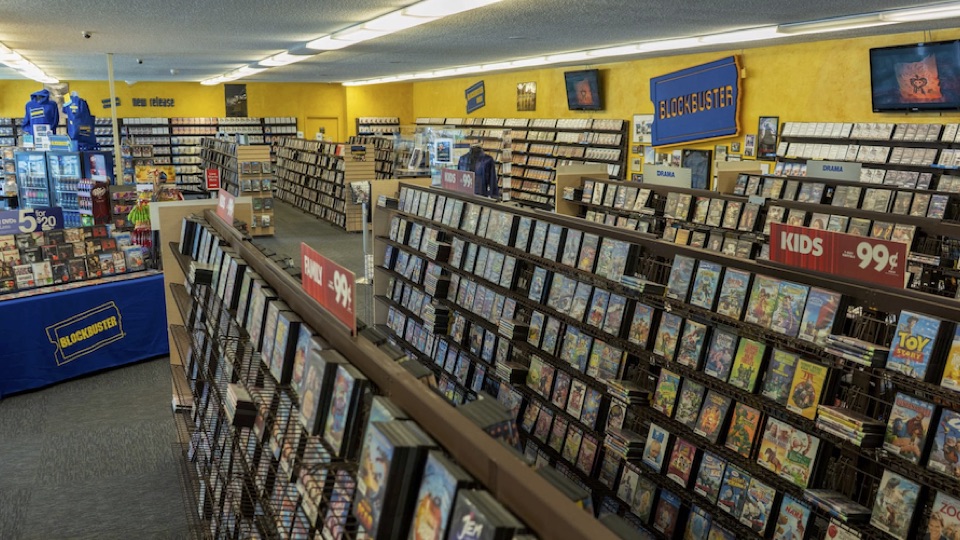 Before there was Netflix or lickety-split movement of movies from the big screen to HBO, there was Blockbuster. Once boasting more than 9,000 locations with 84,300 employees worldwide, the video-rental giant slowly closed all its doors over time, finally declaring bankruptcy in 2010. Well, almost all doors.

There’s still one last Blockbuster on the planet, and it’s thriving in the outdoor playground city of Bend, Oregon. It’s no run-of-the-mill store either: there’s even a documentary about it, The Last Blockbuster, and deservedly so.

First, a trip down “Be Kind and Rewind” memory lane. Not so long ago, and despite threats of late fees, millions of movie lovers looked forward to having a Blockbuster Friday movie night, be it a date night or time spent with family and friends. Cruising the aisles for selections, sliding in a rented VHS tape, and settling down with a bowl of hot buttery popcorn meant a beatific weekend was at hand, especially if any of the movies you wanted to see weren’t all checked out.

Bend’s Blockbuster showcases a certain charm that streaming services and premium cable channels lack. Managed by Sandi Harding, a/k/a “Blockbuster Mom,” the store’s shelves are generously stocked with everything from oldies but goodies to newly released titles. COVID-era protocols such as curbside pick-up, sanitized DVDs in a Ziplock bag, mandatory mask-wearing, and social distancing are in place as well. Aside from that, the site has become somewhat of a tourist attraction.

Of course, Blockbuster logo-branded T-shirts, tote bags, and namesake party games are available for sale. However, visitors also come to gawk at movie memorabilia which includes items from Highlander, Russell’s Crowe’s jockstrap from 2005’s Cinderella Man, and other movie props previously owned and donated by Last Week Tonight host John Oliver. The Bend store inherited the collection from an Alaska Blockbuster upon its closure. Harding tells Yahoo Entertainment, “People really do travel just to see us. We’ve had people from all over the world come to central Oregon; they were coming there for the nostalgia, but they also wanted to say hello, and tell us what Blockbuster meant to them.”

Last August, the store partnered with Airbnb in allowing Deschutes County residents to book a slumber party at the store for three dates in September. Party guests were treated to an old-fashioned Blockbuster night complete with a recreated 1990’s living room with a hide-a-bed, bean bag chair, a Sony VHS player, and a closet containing vintage fashion items like parachute pants and scrunchies. This was Harding’s way of thanking her community for supporting the store in spite of stiff competition from Netflix, Redbox, and the like, which initially helped cause the Blockbuster business model to go stale.

This Blockbuster locale is obviously more than a place of employment for Sandi Harding. It’s where she and her husband rented a movie for their first date back in 1993 and where their three sons have also worked. According to Harding, “Minus the late fees, people have such fond memories of date nights and family time, some of which don’t exist anymore.”

[The documentary The Last Blockbuster is available on Amazon, Apple TV, and other platforms and features Sandi Harding, along with celebrities Kevin Smith, Adam Brody, and Ione Skye.]

Photo: Fair use image from “The Last Blockbuster” (Ryan Harding)

0 comments on ““The Last Blockbuster”: Rewinding to Another Era”