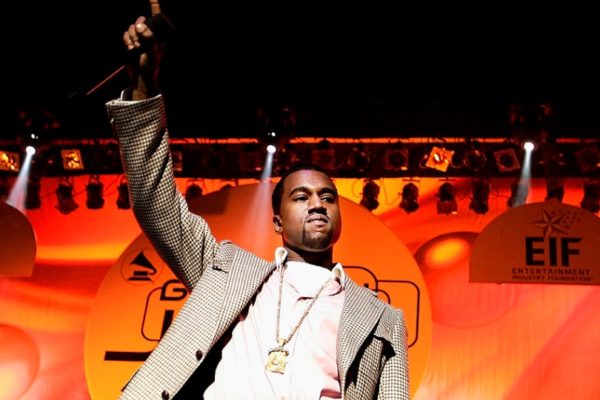 Kanye West is a genius in what he does, plain and simple. He’s the one 21st-century artist who seemed to single-handedly change the course of popular music with each new album. There’s worlds to be studied in his beats, lyrics and performances, as well as live shows, videos, and interviews. When things settle down we’ll look back at him in the same way we look now at Bowie or Prince — other artists who used to split audiences to extremes back in the day. There’s a lot to be written about him, but for now we’ll focus on the thing that matters the most in the end: the music itself. More specifically, the five albums that I consider to be his best.

[amazon template=right aligned image&asin=B004D7GU3M]5. Yeezus
Sort of like his Metal Machine Music, Yeezus is one of the greatest f**k-you albums ever. Unlike Lou Reed though (who was a huge fan of the album by the way), Kanye presented his in the form of actual songs, but they were still some of his angriest, most challenging up to that point. The album literally opens with a blast of noise and most beats throughout seem to take their cues from the experimental underground scene. This is in perfect accordance with West’s delivery, a new one where the importance is not put on what is said, but rather on how it is said. Songs like “Black Skinhead,” “I Am a God,” and “New Slaves” are slices of pure punk delivery that take no prisoners along their way.

4. 808s & Heartbreak
Oh, the infamous break-up auto-tune album. Scorned at and frowned upon by even the most hardcore of his fans. What can I say? I think it’s a beautiful record. I’m aware that Kanye is a better rapper than singer and his melodies are not exactly the strongest. And I know that his use of auto-tune to mask that has been imitated and abused by way too many. But when he did it back in 2008 it was still relatively fresh, and it added an extra dimension — it made him sound twice as hurt and broken when lamenting over the recent death of his mother and the ending of his relationship. The beats were also stark and minimalistic, and the lyrics shockingly naked; whether he talked about the emptiness of fame (“My friend showed me pictures of his kids / And all I could show him was pictures of my cribs”), his own flaws (“I’m a monster, I’m a killer / I know I’m wrong”) or giving up on love (“Goodbye my friend, I won’t ever love again”).

3. My Beautiful Dark Twisted Fantasy
In my mind I’ve always associated My Beautiful Dark Twisted Fantasy with Talking Heads’ Remain in Light. Both came at a time when their genres (hip-hop and rock respectively) were seen as being past their prime. Both revitalized them by bringing influences from way outside of their comfort zone (Light with world music; Fantasy with everything from rock guitars to baroque-influenced arrangements). Both are maximalist studio constructs, with multiple layers and an attention to detail that keeps you studying forever. Naturally, both became milestones that opened new gates and inspired a generation of artists in the decade that followed.

2. Late Registration
Already by his second full-length effort, Kanye set the ground rule that no two albums of his would sound the same. The College Dropout popularized the sampling style of taking soul sounds and speeding them up (nicknamed “chipmunk soul”), so Late Registration abandons it altogether. Instead, this release saw the rapper pair up with soundtrack composer Jon Brion to create even more intricate soundscapes. Nearly every song here has an instantly memorable instrumental hook, from the dazzling string arrangement of “Gone” to the thick bass of “Diamonds from Sierra Leone” to the blasting horns of “Touch the Sky” to the gorgeous harmonies in “Crack Music.” For “Roses,” he takes Bill Withers’ “I smile when Rosie comes to see me” lyric and makes “Rosie” sound like “roses” — a symbol of how the whole family gathers around his sick grandmother in the hospital. And “Hey Mama” is definitely one of the most emotional hip-hop songs ever written, right up there with 2Pac’s “Dear Mama.”

1. The College Dropout
It is important to remember that when Kanye’s debut came out in 2004, it was seen as a breath of fresh air in the world of hip-hop. An introspective album that talked about family, education, religion, and racism, and that worked as an antidote to the bragging and posing of all those gangsta rappers. Sonically, it was warm and melodic, with soulful samples and gospel choirs that just jumped out of the speakers and invited you to be part of the experience. More than a decade later, it has not lost one bit of that charm. I was one of those people who got into Kanye through his later albums, but hearing The College Dropout for the first time put everything else into perspective. I still don’t think he’s ever made a better album, one where he had so much to say, where the wordplays were both smart and funny, and where even the skits worked wonderfully.