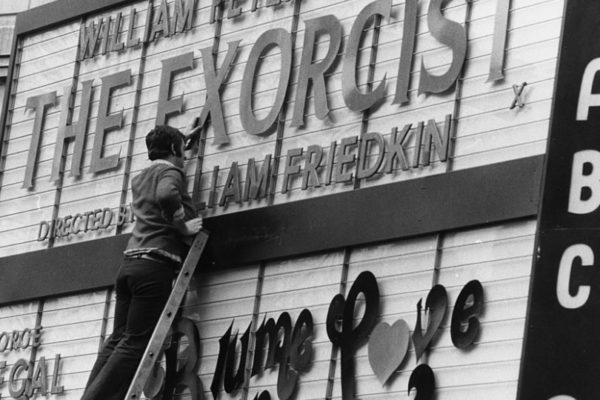 The 1970s were a pivotal era in American movies. As the leviathan studio system shook off and redistributed its great weight, genre reinvented itself. Science fiction and musicals are notable examples, but no genre went through as significant a re-imagining as horror. Horror’s eminence in the ’70s was largely the provenance of literature —as, in the 1930s, horror film invented itself via Stoker and Shelley. As page turns equal ticket sales, many of the seventies’ bestselling novels found their stories onscreen, including such decade-defining hits as Peter Benchley’s Jaws, William Peter Blatty’s The Exorcist, and Stephen King’s Carrie and Salem’s Lot. Here are five fright flicks from a watershed decade for cinema that was also a bloodshedding decade for horror.

In the 1970s, only Robert Altman came close to William Friedkin for unilateral acclaim. Friedkin bookended The Boys in the Band and The French Connection by directing arguably the best movie of the decade: The Exorcist. Few horror films are actually terrifying; The Exorcist genuinely is. Friedkin masterfully pits SFX trickery against the smartest casting since All About Eve to create an atmosphere of lingering, frigid terror. Vomit and levitation were the least of it; current audiences expecting good-natured gore will learn how much more frightening fear is as drama. Frame to frame, The Exorcist proceeds as chill as the crypt, as grave as the last rites that befall its characters, as hard to sit through as the exorcism performed by the actor who once played chess with Death. At the denouement, the film arrives at the bleak hopefulness of a winter’s day, but it’s taken the audience through a literal portal to hell to get there.

Seventies horror was either an embrace or a knife in the back of the disenfranchised, and no outcasts were ever more unpopular than the title characters in Carrie and Willard. Sissy Spacek was nominated for an Oscar by playing Carrie as an adolescent stray with a profound depth that wasn’t just about hating cheerleaders. Spacek’s Carrie is the victim of her mother’s religious zealotry; her blood-soaked prom gown the symbol of naivete becoming a narrative where victims beget victims. Carrie is gleeful and ultimately satisfying, a not uncommon fantasy of an outcast’s revenge; however Willard is morose and unsettling and stays there. Willard is the ultimate outcast — a mama’s boy only able to make friends with rats. Willard freights its audience with knowing just how bad it can get, presenting loneliness as loneliness actually is: isolating, hopeless, a trap that leads to madness. Carrie‘s horror trope is blood and Willard‘s is vermin, but both are much more than the splash and squirm of their gore. These two films are condemnations of a society that creates its monsters only to abandon them.

No VCR-based Saturday night house party is complete without a slasher flick leading us into the basement of a sub-genre where there would be no Freddy Kreuger or Jason Voorhees without Michael Myers, nor Myers absent Norman Bates. When a horror film is schlocky it is because you can feel the director’s exertion; not so Halloween, which succeeds precisely due to John Carpenter. Halloween is an examination of the American middle class and excels in all of the ways that related films such as The Amityville Horror falter; its paths lead to Samantha’s forgotten birthday just as surely as they lead to Camp Crystal Lake. But as cerebral as Halloween slyly is, it’s first and foremost great scary fun — right down to its lead actress, the daughter of Psycho‘s shower victim and Manitou’s fake soothsayer. The idea of the ax murderer usually plays best with camp, but with Halloween, Carpenter elevated an exploitation staple to something close to a sophisticated drama and not far from an art film, with an auteur’s surety and historic impact.

The Manitou is ridiculous, but curiously relevant as counterpoint. In the ‘70s, the aesthetic of entertaining awfulness sank way low — really waaaaaaay low — perhaps no more memorably so than in this occult thriller about ancient thought-forms, medical malfeasance, and the nouveau riche. As with Dan Curtis’ much better if equally preposterous Burnt Offerings, 1960s hagsploitation updates as 1970s stunt casting, with The Manitou offering Ann Sothern as an out-of-touch rich lady and Actor’s Studio stalwart Susan Strasberg as the title-bearer. Even so, the true centerpiece of this film is Tony Curtis as a charlatan fortuneteller. Curtis, smarmy and suave in full Aleister Crowley drag, slouches through the film on the gusts of his own vulgarity. The Manitou— never plays for laughs and thereby reveals that sometimes unintentional camp can be the best kind. In an era of serious horror, sometimes the best scare is the one that lets out the breath rather than holding it in.

PS. If you’re looking for a suggestion on a horror TV show, check out our reviews of Bates Motel, Penny Dreadful or Stan Against Evil.