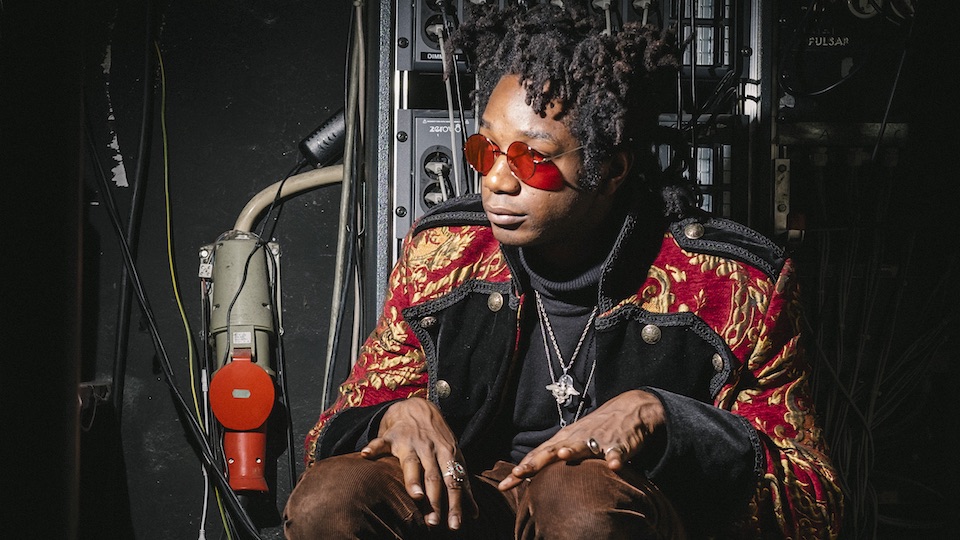 Lookman Adekunle Salami (aka “L.A. Salami”) is otherworldly talented, there’s just simply no other way to put it. He is a transcendent musician, songwriter, performer, and poet. The London based folk-artist follows in the tradition of his forefathers by telling relatable stories set to simple songs, but when he does it the range of emotion shining through is anything but simple. With the complex motifs L.A. Salami is laying down in his tunes, it’s easy to see why his popularity has been steadily growing.

Recently, Salami let loose a new EP called Self Portrait In Sound and it’s a gorgeous piece of music that tugs on emotional heartstrings, while still being very much a record for our time. L.A. Salami will no doubt be releasing new tunes for decades to come, and every time he does he pushes forward the entire genre of folk-music as well as the concept of storytelling as an art form.

Q: Your music is a beautiful and interesting blending of sounds. Who do you really model yourself after musically?

A: It’s hard to say these days, as I constantly feel like a blank slate trying to discover who I am, and haven’t really found many helpful answers when I model myself after musical artists… But I would say that I identify more as Blind Willie Mctell or Abner Jay type figure, who uses fundamental blues and punk as a basis to explore different things – A disciple of the Greenwich village 60s scene who’s perhaps grown cynical of it.

Q: There is also an obvious political edge to your tunes, who are the less musical influences on your life? Who influences the poetry and politics?

A: I wouldn’t say I have any political influences that I feel have strongly influenced me enough to be of note, mainly because I don’t see my music as political – More, subject-broad emotional music. As for poets, my songs have probably been affected by the works of Keats, Ginsberg, Gil Scott Heron, and people of the like.

Q: Are your love songs about a particular person or are they more conceptual?

A; It very much depends on the song…

Q; I think the world of your music, I’m always telling friends you remind me of Bob Dylan and Billy Bragg. Where do you rank yourself in the lexicon of great songwriters?

A; Hmm, I wouldn’t like to say, as I supposed an opinion like that can only be legitimized by enough other people sharing that same view. I’ve proved what I need to prove to myself personally though to feel like an opinion of that sort is warranted.

Q: Who are some of your major musical influences that may not be so apparent? It’s obvious you like Dylan, Guthrie and folk singers of that Ilk. But whose tunes do feel might be seeping out pf your music in a more subversive way?

Q: How does the current political climate affect your songwriting? Some of your past tunes have been very outwardly focused, while this new one self-portrait in sound is obviously very personal and a look inward. Why was it time for that kind of record?

I find I write a lot of emotional music, it just so happens to have been the way I ended up putting it out there.

A: If you could break it down into a sentence or 2 what is this new record about?

Self-reflection balanced against the love you find.

A: Album coming this summer – New sounds, more in line with my present self. It’s the first record I’ve largely produced myself but had great help from mixers Peter Lyons and Robbie Moore.

Q; Any upcoming US tour dates?

A: Look out for the second half of the year!

Q: What is the best way to Keep up with LA Salami?

Photo courtesy of the artist

0 comments on “L.A. Salami Gets to the Meat of His Songwriting”