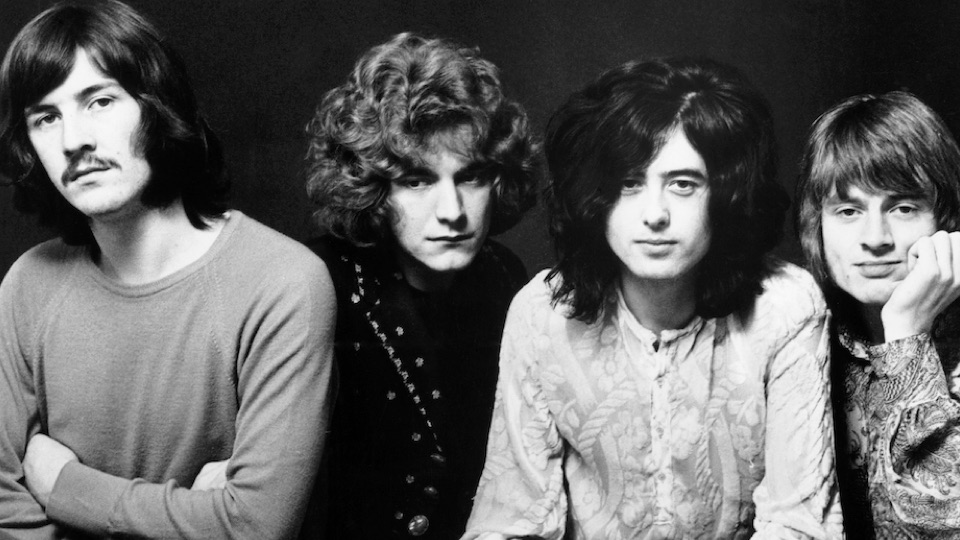 50 years ago, the world was gifted with Led Zeppelin’s debut album and out the gate, the band proved to be raw, divisive, accomplished, and unapologetically loud — a one-of-a-kind, iconoclastic rock quartet playing with masterly precision. Composed of four individuals who could have easily been stars of their own separate bands, this musical collective together found a symbiosis that made them a powerhouse greater than any of them would have ever accomplished alone. And guitarist Jimmy Page had already done so much on his own! We can only praise the Rock Gods that Page didn’t settle on his laurels and that he set his sites on higher heights. Does anyone hold the Yardbirds in as high esteem?

Because back in 1966, Page was joining fellow 6-stringer Jeff Beck as The Yardbirds’ newest find. The pair’s dual-powered attack in that band paved the way for future heavy metal acts. Listen to “Happiness Ten Years Times Ago” joining two woven guitars with session player John Paul Jones’s elastic bass parts. Matched up with Beck and Jones on the raucous “Beck’s Bolero,” Page’s prowess as a guitarist and a producer would serve him even more so when he found himself as The Yardbirds’ sole guitarist the next year. Employing shades both pastoral and electric, Page rose to the challenge with a kind of playing that was nothing short of revolutionary. Yet the changes didn’t stop there.

Prolific tours had left vocalist Keith Relf and drummer Jim McCarthy exhausted, so as custodians of The Yardbirds name, Page and manager Peter Grant elected to honor 1968’s Scandinavian concert dates with other musicians — specifically, two 20-year-old musicians: John Bonham and Robert Plant. Simultaneously, Chris Dreja’s role as bassist was also filled by Jones, freeing Dreja to pursue his interest in photography. When The New Yardbirds set their wings, however, the synergy necessitated a new name. Enter Led Zeppelin. Their debut LP was pulled together in 36 hours of studio time, personally paid for by Page, the band’s leader and chief songwriter.

Although this eponymous album wasn’t as polished as later releases, Led Zeppelin definitely offered enough promise to position Led Zeppelin as one of the more exciting bands of the ‘70s. It was a debut that packed folk, metal, blues, and psychedelic sounds into one ferocious package, strengthened by Page’s assiduous guitar work and Bonham’s spectacular drumming. The lineage of musical influences was clear… so clear that Jake Holmes, Al Stewart and Jeff Beck criticized the guys for not being entirely original in their appearance! Nevertheless, the band played with such stealth and innovation that the fans grew quickly in number. Who couldn’t enjoy that vastly seductive sound?

The bone-crunching “Good Times Bad Times” opens the album with the necessary metallic interpolations; “Communication Breakdown” furthers a choppy energy akin to Black Sabbath and Iron Maiden; “Black Mountain Side” finds Page drawing on Eastern influences while “Your Time Is Gonna Come” has an organ-led Jones delivering a viscerally hypnotic groove. “How Many More Times” is yet another heavy metal monster; “You Shook Me” and “I Can’t Quit You Baby” highlight Plant’s most assured and confident vocals in a blues bombast that still delights arena crowds. Even “Babe I’m Gonna Leave You” offers an early insight into the stop/start guitar/voice relationship Plant and Page would share well into the ‘90s on their sparsely acoustic No Quarter album. The extraordinary “Dazed and Confused” only improves further in concert giving the album’s pyrotechnics a new life as a 20-minute psychedelic opus. All said, the Hindenburg airship catching fire in 1937 seems a fitting image for this fiery and explosive album.

And yet… The album failed to make an impression on the critics. Hurt by some of the more caustic reviews, Led Zeppelin avoided the press for a while. Instead, they made their name through concerts, sales, and word of mouth, thereby earning them some street cred and much-deserved clout. Critical posterity has been kinder to Led Zeppelin, the first of three albums to share the band’s name. So what if Plant, Jones, and Page have kyboshed any dreams of a Zeppelin reunion: Led Zeppelin has eternal pleasures as it documents the start of a decade that they would musically conquer.