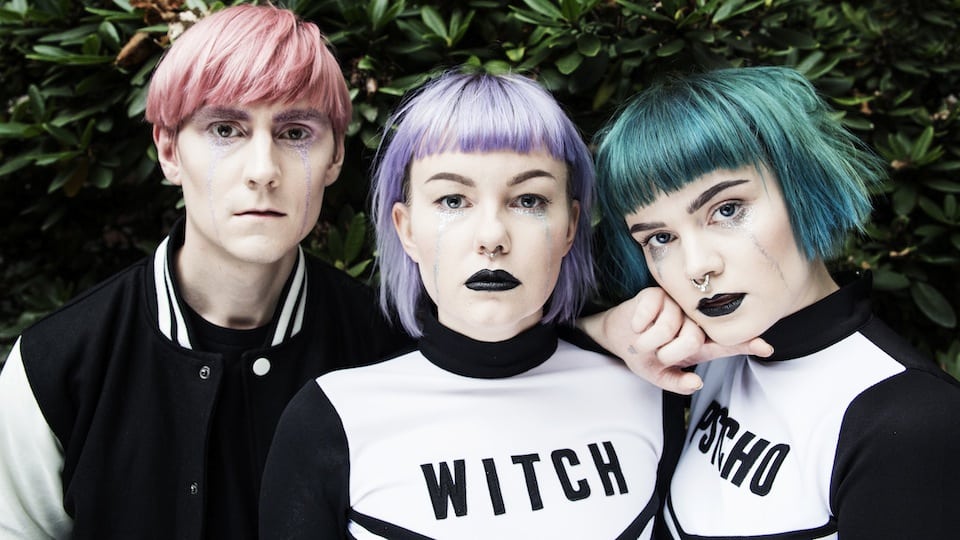 With a lyric like “Gotta lose it up, gotta get on top / And know that I won’t stop until I break your bones off,” you can be damned well sure that The Magnettes aren’t about to further notions of women as passive partners when it comes to sex. Following in the tradition of The Ronettes, The Runaways, and The Go-Go’s, singer-songwriter Rebecka Digervall warned “Don’t sing it in church” in reference to their single “Bones” a couple of years ago on The Porch Sessions. That kind of defiant playfulness typifies much of her work with bandmate, co-founder, and lifelong friend Sanna Kalla so much so that far from running away from labels like Psycho and Witch these two singing Swedes proudly wear those exact words emblazoned across their chests in music videos for their singles “Sad Girls” and “Killers in a Ghost Town” of their 2017 LP Ugly Youth. You can get a bit more of this insurgent spirit in the joint interview below.

Q: From its opening lyric “Put on makeup, fake a smile…,” your debut LP Ugly Youth sometimes feels like a joyously exuberant middle finger to the patriarchy. But which of the two of you would you say is the more rebellious?

A: We try to amp each other up all the time to not get caught in the whole “INSTAGRAM LYFESTYLE #GOALS”. To rebel against the impossible standards that we put on young girls and speak up when something is not right. It gets really hard sometimes, that’s why we’re happy to have each other’s backs! F**k #goals.

Q: It’s been a year since Ugly Youth was released. Since then, you’ve performed everywhere from Taipei to Milwaukee. What city has been the most surprising? Did you have a favorite?

A: We love all the cities but our favorite area to play is the Baltics. We played sold out shows over there ’cause a lot of people are really into new, up-and-coming bands.

Taipei was so cool. We played one show there for such a hype audience. We’re used to being close to our audience and we usually jump off the stage. We did but the security became like a wall around us and was holding the people back!

But we always dance in the crowd so the last song we ran down from the stage from the back so we could dance with everyone on the floor like we always do. Sorry security…

Q: Some of your songs incorporate Meänkieli, a little-known language here in the USA. Are you all fluent in this language? Do you have any songs that are entirely in Meänkieli?

A: We’re not fluent in Meänkieli unfortunately. Our parents speak it but we’re part of a generation that kind of lost the language. Which is very sad. We know some words and simple phrases. We wanna get better at it so we can maybe one day write a song completely in Meänkieli. That would freak people out.

Q: You’ve actually resisted moving to Stockholm (or London or New York for that matter). Do the fans ever come to the small town of Pajala in search of you?

A: Haha, that’s most def a goal! If we, in the future, could bring fans up to Pajala and like have guided tours on our bikes with them would be so cool.

Q: You actually had a documentary made about you (Pajala State of Mind) before you had released your first LP. How’d that come about?

A: That documentary was mostly focused on us being a part of our minority in Sweden — Tornedalingar — and growing up in Pajala. But it was around that time we had our first show in the US and Rebecka moved to Stockholm. So a lot happened during that time: 2013-2014. When we look back on it now it feels like a thousand years ago and “omg what was that hair.” But it’s kinda cute and cool to have that part of our lives on tape.

Q: In the music video for “Bones,” your eyes shoot out light. But if you could have any superpower what might it be?

A: Like teleportation maybe… We wouldn’t have to sit around in airports and eat expensive sandwiches.

Photo Credit: Image of The Magnettes by Peter Åstedt.

2 comments on “The Magnettes: Riot Grrrlz With Glitter”