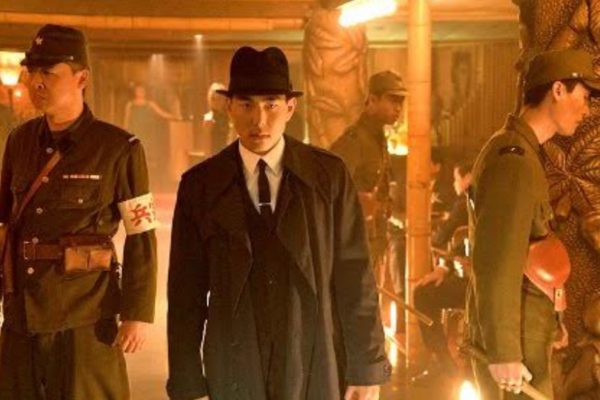 Actor Lee Shorten shows up as Sergeant Yoshida in nearly every episode of the first two seasons of Amazon’s Emmy-winning breakout series The Man in the High Castle so you can be damned sure he knows this disturbing alternate reality as well as our own at this point. Given his expertise, it’s only natural that we’d turn to Shorten to gain some musical insights into two of the show’s main characters. But now that we know his taste in music (which we happen to appreciate), we’re also wondering if he DJs on the side sometimes. We will keep you posted.

[amazon template=right aligned image&asin=B00RSI6NKS]Q: Name three albums from the future (i.e., post-1962) that you’d send to Juliana Crain and Frank Fink to help them envision a better world and why you’d pick these three.

A: Oh man, good question. Hmm, I have to say any album by The Beatles. Just send them The Beatles’ entire catalog, that should do it. Haha.

Frank and Juliana live in a dark and oppressive world. I think JT’s sophomore album has a well rounded mix of upbeat and soulful pop songs. Tracks like “FutureSex/LoveSound” and “SexyBack” can show them the future is bright and sexually liberated. Unfortunately they haven’t and won’t experience the 60’s as we know it. While tracks like “LoveStoned” and “Until the End of Time” will remind them love is powerful.

Frank and Juliana have, for the most part, only experienced the downside of multiculturalism thanks to the fascist racial hierarchy imposed by the Imperial Japanese. MJ’s eighth studio album may not have as many standout tracks as Thriller does, but I think they could use the uplifting messages of “Heal the World” and “Black or White.”

3. The Rolling Stones’ Let It Bleed

Well, we’ve already sent two pop albums so we should probably send them something with a bit more edge. Let it Bleed has two lyrically important tracks for Frank and Juliana, “You Can’t Always Get What You Want” and “Gimme Shelter.” Although both deal with some dark themes, I find them uplifting.

Q: Name three Desert Island album picks of music for yourself and why.

Easily one of my all time favorite albums. Period. It’s a complex, rich and layered album, both musically and lyrically. It’s one of those albums that definitely takes you on a journey. To this day it’s one of the few albums I will put on and just listen to from start to finish. And not in the background, I’ll just lie down and listen to it.

The Deftones have always been slightly ahead of the Nu Metal curve, but White Pony was next level. Chino’s ethereal vocals really soared on White Pony, and Carpenter and Delgado managed to create these epic and contrasting soundscapes. Few albums cover so much ground, in terms of sound and emotion, yet still manage to feel cohesive.

You know, I was trying to think of a pop album because I really do like pop music and if I’m trapped on a desert island, I could probably use the contrast but I just couldn’t go past Ten. It’s such a killer album. Eddie Vedder really pours his heart and soul out on that album, from “Alive” to “Black” to “Release.” It’s one of those albums I could listen to without vocals, because Gossard’s writing is that good.

Q: Name your favorite movie adapted from a Philip K. Dick novel or short story and why.

A: These are really difficult questions, you know that? Haha.

[amazon template=right aligned image&asin=B004529NMK]Blade Runner. It’s a near-perfect film. The production design is incredible, that future feels real, lived in and dark. It’s beautifully shot, the performances are great, and perhaps most of all, it asks some interesting and important questions about the nature of humanity. I think good art does that, it has something to say about life, about us and it forces us to question our perspective. It’s ambiguous without feeling cheap, in particular the question as to whether Deckard is also a replicant. I think that is handled so well. And of course, I think every character has a strong, unique and ultimately sympathetic point of view. If you don’t sympathize with Roy Batty by the end of the film, you’re a monster. Haha. I’m curious to see where they take the sequel, I think Denis Villeneuve is an intelligent filmmaker so I’m looking forward to it.

PS. For a different perspective on music for a desert island, check out our post A “Grace and Frankie” Producer Imagines Sending Characters Desert Island CDs.