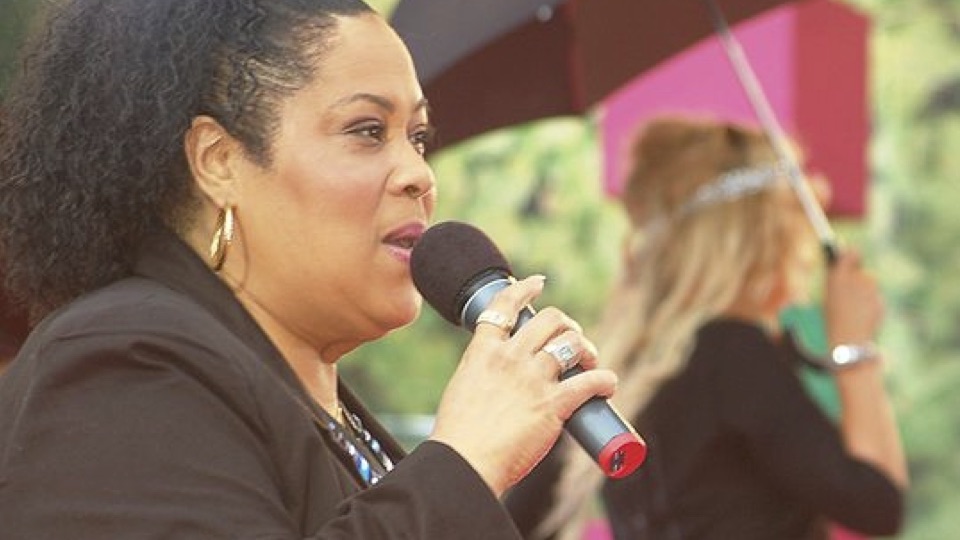 “Almost like a ghost town” is how Martha Wash described quarantined NYC. We talked on the phone a few days before the Rolling Stones released a new single focused on that very image.

Related: “The Stones Are ‘Living In A Ghost Town'”

Before we turned to her new album, Love and Conflict, Wash spoke with wisdom and empathy about the need for testing and staying at home, considerate about hardships such changes bring. She first asked me, “You’re staying safe?”

This depth of feeling and clear, energized insight is what characterizes Wash’s music. Her power-house voice evokes the sense of a generous hand offered to a lost listener, encouraged to “hold on” and “arise” throughout this record’s eight tracks.

“People are really conflicted,” she acknowledged, speaking about the confusion of the present moment.

For those seeking uplift in this new pandemic world with the old-familiarity of the Stones or the Beatles, Wash’s Love and Conflict is for you—for more reasons than one.

Wash is the iconic voice you’ve known for all these years though you might not even realize it. As one-half of the Weather Girls, Wash sang “It’s Raining Men,” a veritable 80s anthem, ubiquitous in aerobics studios and gay dance clubs. Before that, she and fellow Weather Girl, Izora Rhodes-Armstead, flanked Sylvester James as his backup singers, Two Tons O’ Fun.

Wash is also the voice inviting everybody to dance now with C+C Music Factory in a song that shaped the 90s zeitgeist. But that group left Wash uncredited, and they were not the only ones to hide Wash’s contributions.

So you might not immediately recognize “Martha Wash”—but her new album asks you to remember with “Don’t Forget My Name.”

The album opens with the glittering “Glamour Flows,” a perfect soundtrack for an opening sequence of, say, a Nancy Meyers film, whose twinkling aesthetics underscore characters’ awakenings and rebirths.

“Very Broadway,” is how Wash describes it.

“Glamour Flows” and the tracks that follow will have you imagining yourself the protagonist of such a story, dancing in quarantine—but not in the way you’d anticipate if you’re expecting Wash’s previous disco or club music. Those elements linger, but they merge with many other styles.

The album “sounds like a musical journey of time period and genre,” Wash has been told.

“Because you do go all the way back to the 60s psychedelic sound,” she says. “And the music continues on and into blues, rock, and pop and then the little hint of gospel music and then a little hint of country.”

These genres find an ideal home with Wash, whose musical interests have been wide-ranging ever since she was a teenager secretly listening to her transistor radio while growing up in a gospel-only household.

Perfectly retro but with “modern-day lyrics,” Wash’s new songs are both rich enough and vague enough for us to find ourselves in them.

“It all depends on the listener’s ears,” which will determine “what they hear in the album in its totality,” says Wash.

What Wash understands about pop music is why social media sing-alongs have become a thing. One such Yellow Submarine viewing is a meta-commentary on its title track’s irony, conceding the claustrophobia of family quarantine with a song usually deemed childlike and carefree.

Love and Conflict is similarly suited for right now: like the Stones’ new release, recorded before the pandemic, Wash’s album sounds like a premonition about the world today.

Wash’s album dropped in early January during the brief slice of time when the “Soaring Twenties” were the right name for the shiny new decade.

The light is what I initially heard, especially in “Soaring Free,” one of the gospel-infused numbers. Now I re-listen and hear the struggle and determination as she sings, “trails don’t turn always right, but I will keep on moving.”

Transcendence pervades Love and Conflict, but so does the recognition that there was and will be strife. Hence the title, which reflects Wash’s three-year effort to get the album made. Wash, now in her sixties, traveled back and forth to Montreal to work with Canadian producer Sami Basbous and his team, but the process had its interruptions.

The album’s title eerily foresaw the disintegration of plans to promote the album, particularly with a show in Austin at the South by Southwest Music Festival. That major venue’s cancellation marked the beginning of our growing awareness about the consequences of Covid-19.

As with many musicians today, Wash’s live performances are on hold. But Wash knows something about being hidden away.

When it comes to the music industry, Wash is a hidden figure. Her lawsuits to restore her own name’s credit motivated legislation that changed industry practices for recognizing vocalists. Her independent label, Purple Rose Records, has projects underway to help restore the legacy of under-appreciated women in disco. This in addition to her advocacy for LGBT rights, as well as HIV/AIDS activism.

“Come into the light,” Wash sings in the album’s last song, “Rise and Shine.” The empty streets of a ghost town are an occasion to seek out voices hidden or left behind, the musical, and the everyday ones that can comfort us with their return.

More from my wide-ranging interview with Ms. Wash will appear in my forthcoming book, Blackbird Singing: Black America Remixes the Beatles (Penn State University Press), a project supported by a grant from the National Endowment for the Humanities.