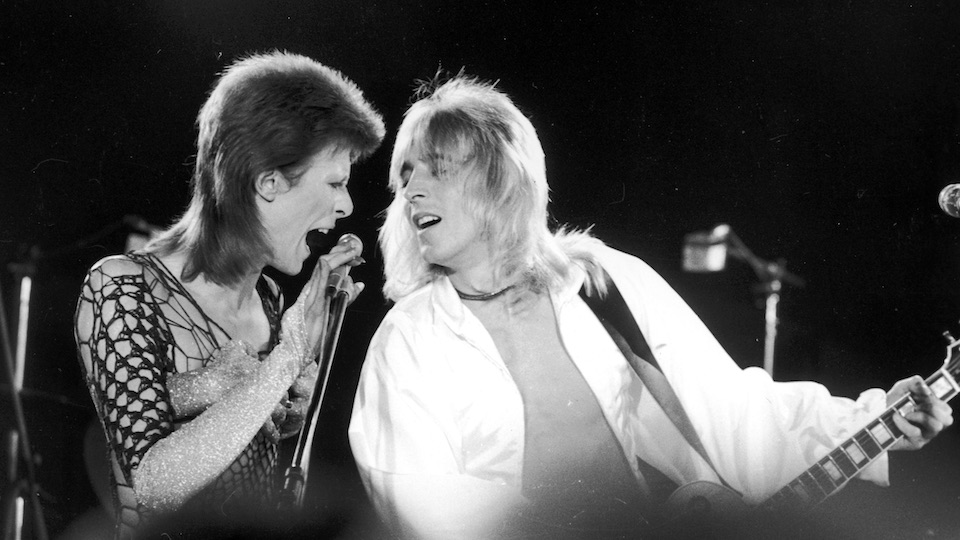 David Bowie’s genius looms so large that it overshadows those who worked alongside him. Bowie guitarist Mick Ronson was more than just another sideman; he was the uncredited arranger and co-producer of some of Bowie’s most seminal songs. Ronson also had a creative life beyond Bowie working as a producer, musician and/or arranger with Lou Reed, Elton John, Ian Hunter, Bob Dylan, John Mellencamp, Morrissey, and others. Bowie always regretted that “Ronno,” who died in ’93, didn’t get the credit he was due. Just before his own passing in 2016, Bowie paid tribute in the documentary Beside Bowie: The Mick Ronson Story (2017). Here are some highlights from Ronno’s fertile career.

Ronno’s brilliance as an arranger is all over “Life On Mars,” though Bowie’s 12-string guitar and Rick Wakeman’s piano gives much of 1971’s Hunky Dory an “acoustic glam” sound (as Def Leppard’s Joe Elliot points out in Beside Bowie). Ronno’s tone and approach would soon help Bowie veer towards a heavier sound, but Hunky Dory’s “Queen Bitch” is an earlier example of the guitar skronk that would define glam rock and inspire the punks a few years later.

When David Bowie smiled slyly into the camera and casually threw his arm around Mick Ronson’s shoulder on the 1972 Top of The Pops performance of “Starman” it was a gesture seen ’round the world—or at least by switched-on UK youth like Stephen Morrissey (who’d go on to form The Smiths and whose solo album Your Arsenal Ronno would produce in ’92). Bowie would go on to make more overt gender-bending gestures like appearing to simulate a certain sex act on Ronno’s guitar during the Ziggy Stardust tour.

There was a point in ’72 when Bowie and Ronno could do no wrong and they sprinkled that fairy dust on others, including Mott the Hoople with “All the Young Dudes” (see below) and Lou Reed on his post-VU masterpiece Transformer. In Beside Bowie Reed jokingly refers to his and Ronson’s “lost in translation” moments, but there’s no doubt Ronno was conversant when it mattered; it was Mick (more than Bowie), who added the sonic grandeur to Reed’s tales of urban debauchery.

Bowie once said, “When I found Mick Ronson, I found my Jeff Beck.” In the movie, another Bowie guitarist, Earl Slick, talks about how albums of the time simply didn’t sound like Ziggy … or Alladin Sane and how “that was all Mick.” Bowie adds that Ronno was brilliant at translating his needs via his six-string divining rod. The solo on “Time” is a prime example (Ziggy’s “Moonage Daydream”’s is another).

Life imitated art when Bowie “broke up” his real-life Spiders after a gig at London’s Hammersmith Odeon in July of ’73. Bowie manager Tony Defries signed Ronson as a solo act with the goal of making him MainMan’s next star. Things didn’t quite work out that way for Ronno who wasn’t born to be a front man, but the record he created in ’74—Slaughter on Tenth Ave—is an underrated gem. It’s true that Slaughter sounds a lot like Ziggy-period Bowie, but as the doc points out Mick was as responsible for that sound as David was.

In Beside Bowie Suzi Ronson recounts the inauspicious (and boozy) circumstances under which her hubby and Bob Dylan met in early ’75. When Dylan later called Ronson and asked him to join his Rolling Thunder Revue, Mick thought it was a hoax. It may have seemed an odd fit given Ronson wasn’t really a fan of Bob’s music, but supporting evidence—including this performance from Oct. 31, 1975—proves it wasn’t a hoax.

Though Ronno wasn’t credited as co-producer, John Mellencamp told Classic Rock magazine in 2008 just how instrumental he was in saving 1982’s “Jack & Diane” from the trash heap (where Mellencamp was prepared to consign it during the making of the American Fool LP). Ronno suggested the song’s memorable “let it rock, let it roll” breakdown, which breathed new life into the song on its way to becoming one of Mellencamp’s most enduring songs.

Ronson collaborated with Ian Hunter many times in his post-Bowie years, even joining Hunter’s band Mott the Hoople for a brief period in ’75. This instrumental from the pair’s 1989 collaboration on the album YUI Orta finds Ronno’s lyrical and emotive guitar genius on full display.

At the 1991 Freddie Mercury Tribute fans paid respect to one legend gone too soon and got to witness two others reunite. Mick played the part he was always meant to on “Heroes” (according to uberfan Joe Elliot) and joined a sax-playing Bowie and Ian Hunter on the number that helped save Mott the Hoople’s career.

Related: “It Gets Better…with Bowie”

2 comments on “Mick Ronson: More Than Just a Sideman”