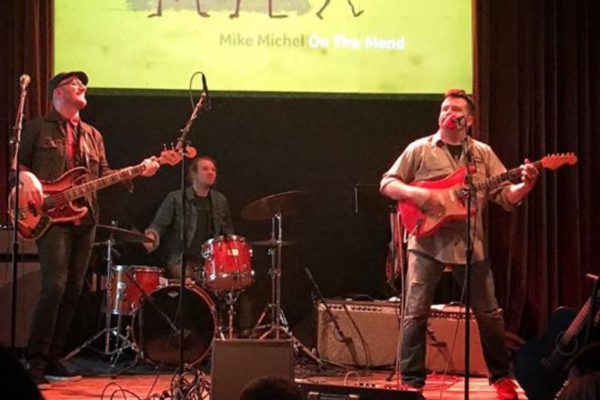 My name is Mike Michel. I’m based in Minneapolis where I‘ve been a recording and touring musician for 30 years. I grew up in Cincinnati and from the get-go I was aware that I was a shy, uncomfortable kid. I kept everything in. Expressing my opinions or my emotions about anything was next to impossible. I felt I was hardwired that way. When I was nine years old, I begged my parents to let me learn to play guitar. They made me spend three years learning piano as a prerequisite. On my twelfth birthday, they gave me a guitar and since they were supportive and musically talented, they rolled with my intense feelings for rock and roll. I fell deep into my passion for making music and knew I had found my calling. I was going to be a musician no matter what.

As a teenager, my friends and I had success with our band, True Azure. We were popular in the Cincinnati bar scene and recorded a few records. Because of our success, I became a session guitarist at local Ligosa Records. It was instantly apparent that I was able to easily express myself onstage and had relatively no fear mimicking my heroes: Pete Townshend, Jimi Hendrix, Adrian Belew, and Stevie Ray Vaughan. The guitar was like a magic wand and eventually I found my individual voice through my music and spent all my free time cultivating my craft. Outside of music, I was still an introvert and struggled with severe OCD. I had profound emotional turmoil which was accompanied by several physical side effects like angina and vertigo. This was the late 1980s and there weren’t many options in the world of mental health, not to mention the heavy stigmas for even mentioning you had issues.

I’ve always had the entrepreneurial bug to pursue my musical ambitions, so I left college and moved to Los Angeles with my music partner at the time, Matt Yelton. We had interest from multiple record companies and well-known producers. To pay the bills, I joined a music tech company called Third Encore and I became a roadie for rock stars like Don Henley, Whitney Houston, Jimmy Page and Los Lobos. Although this job gave me a lifetime of hilarious stories and WTF moments, I realized I was neglecting my true calling and my OCD came back with a vengeance. I met Dave King of The Bad Plus when he auditioned to be the drummer in my band. He hailed from Minnesota and talked about it like it was the land of milk and honey. After going through floods, fires, riots and earthquakes, we decided to give up on California and move to Minneapolis in order get back to our art.

I had never been to Minnesota, but with blind faith, I drove across country there in the late ‘90s hoping to find myself again. I arrived in the Northland in the middle of a massive March snowstorm. I remember sitting in my car at a red light thinking, “What have I done?” It took a few years to integrate and adapt to the culture, but I soon realized Minneapolis is a progressive, art-centric city in which to cultivate an original music project. I took pride being in great bands like Gosh, The Bill Mike Band, Iffy and Saltee. I was spoiled as a session guitarist working for notable Minnesota artists like Haley Bonar, Wendy Lewis, Robert Skoro, DJ Woody Mcbride, Courtney Yasmineh and many other amazing artists. I was also able to curate two modern guitar festivals, start many music education programs, and teach music at many progressive schools. I remember thinking to myself, “Man I’m the luckiest man in the world. I’ll be doing this till I’m 80.”

That all changed just before Thanksgiving in 2013. The day after a Saltee gig, I woke up to strange noises in my head. They were abrasive, intrusive, and alarming. I did not react to these sounds well and because of my OCD, I obsessed about them. In the beginning, I consulted with many traditional Western doctors, audiologists, and ENT specialists. To eliminate the worst-case scenario, a brain tumor, I got an MRI which came back negative, thank God. All of the doctors said the same thing: I have tinnitus and there’s nothing that can be done. My hearing is excellent minus one microscopic notch and I have no internal inner ear damage.

I was familiar with tinnitus since my Dad has had a mild case starting in his 40s. Tinnitus has many theoretical descriptions, but is a brain-related condition since hearing is actually processed in the brain. In short, if you have tinnitus, you are hearing your internal electromagnetic highway (you don’t hear these sounds with healthy brain gating systems). As my worry increased so did my condition. I then developed severe hyperacusis (sensitivity to sound) and then began to fear all sound, which was paralyzing. I became severely depressed and a recluse. I avoided all things musical other than some light teaching to make ends meet, but even that was painful. I was looking into disability and bankruptcy. I thought my 30-year music performance career was over.

Tinnitus was a 24/7 ordeal. Coffee grinders, grocery carts, heavy traffic, iPhone speakers, laptop speakers, people shouting, and students strumming acoustic guitars all triggered tinnitus “spikes” or temporary increase in my noise levels. These spikes put a lot of stress on my central nervous system, and over time, my brain created new neural pathways which resulted in an increase in sound sensitivity or hyperacusis. If I dropped a spoon on the kitchen floor it would feel like a drummer just hit one of their cymbals as hard as they could.

After a year of online medical research, I found two tinnitus experts (Julian Cowan Hill and Kevin Hogan) as well as a few therapists who really helped me. Underneath the gloom, I felt finally felt a little spark, so I unpacked an old classical guitar my sister used to own. I’ve been known in the Northland for being an experimental electric guitarist, but I’ve written most of my songs on this guitar. Classical guitars have soft nylon strings and produce warm tones. I strummed a few chords and noticed that my tinnitus and hyperacusis didn’t spike that much when I played this particular guitar. I was elated. I didn’t even have to wear earplugs!

For the next few months, I had an overload of melodies (and lyrics) flowing through me. I know this sounds cliche but I had never experienced writing so much material with so little effort. I was channeling something from another world and was filled with a sense of purpose. I felt it was my responsibility to consolidate these songs and write a record about my experience. I called this record On the Mend. I was broke and decided to try a Go Fund Me campaign to raise money for the record. It was extremely scary reaching out to my family, friends, music colleagues, and students announcing to all that I’m not well. To my utter disbelief I was able to raise close to $14k which covered all my costs of the recording.

With themes of resiliency and healing, I always hoped this record could be a managerial tool for people who needed a lift or were struggling from tinnitus or from any condition really. I’m a rock guy and I didn’t want On the Mend to be new-agey or a mellow singer songwriter record. Nothing against those styles, but it was a change from my experimental rock roots. It’s my first acoustic record, but I tried to include some rock n’ roll energy. I recorded On The Mend with producer and friend Jason Orris who also suffers from tinnitus. He coached me through the recording sessions which were tricky as I still had sonic limitations and my fear of sound was not fully under control. Steve Goold (Sara Bareilles, Ben Rector) provided superb drum beats and Ian Allison (Eric Hutchinson, Gavin Degraw) put down some hooky groovy bass lines. With their creative efforts, the entire recording came to fruition exactly how I envisioned it.

Through this trauma, I became a more focused and disciplined songwriter. That was something I’d always tried to do, but failed to accomplish. In some miraculous way, tinnitus and hyperacusis have been wonderful teachers and have helped totally realign the way I think about music and my career. I feel totally on track. I made the internal decision to reboot my performance career in January of 2017. I played a solo acoustic set at a little bowling alley theater called The Bryant Lake Bowl Theater in South Minneapolis. I was a wreck for an entire month beforehand but one of the tools I’ve been working on with my therapist is mindfulness. On paper, the concept of mindfulness seems really easy, but for an anxious OCD planner type, it took years to sink in.

I paced myself onstage that night, focused my eyes on the audience and thought about my intentions for performing music. I thought about how lucky I was to even attempt performing again. I thought about fellow musicians like Ryan Adams, Chris Martin, and Pete Townshend who have overcome tinnitus and hyperacusis and have gone on to continue their music missions. The gig rocked, my conditions remained still and I felt like I was home again. Every gig from that moment on has been sacred and I inspire to keep getting better, more resilient, and self-aware. I’m still making my way through recovery and trying not to put a time limit on it, but celebrate each moment of joy.

Editor’s Note: Mike would like to thank Think Piece Publishing for their collaboration in releasing On The Mend.

0 comments on “My Personal Journey “On The Mend“ with Tinnitus”