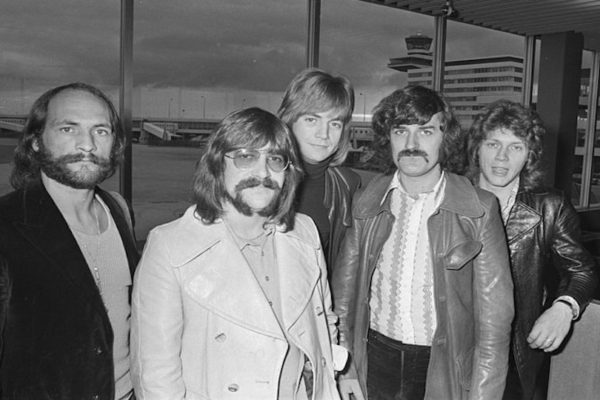 In the mid-1960s, The Moody Blues released a series of experimental concept albums that defined psychedelic art rock. For their sixth album the group needed a new batch of songs that could be performed live more easily, so they sought to streamline their sound and get “back to basics” on 1970’s A Question of Balance. But “back to basics” is a relative term for The Moodies, who the year before had released a concept album about the moon landing called To Our Children’s Children’s Children. Considering that Children’s was the latest in a series that had started with the classic Days of Future Passed (1967), it was unlikely that the band would somehow pivot to Let It Bleed overnight.

But A Question of Balance was nonetheless a radical departure for The Moody Blues, and it is a deeply satisfying listening experience that focuses on top-notch songwriting and tight performances. The patented studio psychedelia of The Moodies and producer Tony Clarke is certainly present but considerably restrained, adding the perfect amount of depth and color to enhance the band’s performances without overpowering them. Lyrically the album continues to explore dramatic territory, with all five band members offering rich social commentary about the plight of mankind and the universe. Many of these themes are frighteningly relevant 47 years later, but there are also glimmers of hope and a good amount of soul-searching and introspection.

The album kicks off with “Question,” a magnificent Justin Hayward composition that veers from pounding rocker to tender ballad and back again. With a driving rhythm track — astonishingly nailed by the band in a single take — and a soaring orchestral arrangement, this song has become one of The Moodies’ most popular tunes and sets the tone for the album as a whole: epic and grand in its scope, but also efficient and engaging. Tracks like “Tortoise and the Hare,” “Dawning Is The Day,” and “Don’t You Feel Small” are steered by a tough Moodies rhythm section fueled by the orchestral/mellotron wind in their sails.

“Balance” is indeed the key word for this album. Although many of the lyrics present a darker view of humanity (“Will they save us in the end, we’re trembling on the brink…” and “Look at progress, then count the cost, we’ll spoil the seas with the rivers we’ve lost…,” etc.), The Moodies are still grasping for sunny ‘60s optimism (“Everywhere love is all around…,” “I’m looking for a miracle in my life…”). The last two songs on AQOB perhaps demonstrate this dichotomy the best. “Melancholy Man” is a slow-building dirge about a “life caught up in misery,” drenched in dark reverb and punctuated by thick synthesizers. But it is immediately followed by the album’s emotional closer, “The Balance,” which features a spoken narration about a man finding inner peace through compassion. The poetry is inspiring and never pretentious, and the entire piece is surprisingly moving.

Though the band were already highly regarded by fans and critics alike, A Question of Balance nevertheless proved to be a turning point for The Moody Blues as they went on to become one of the premiere live acts of their generation. They also continued their ambitious recording career (apart from a brief hiatus in the mid ’70s) that has allowed them to become, in hindsight, an important bridge between the early ‘60s beat-group-with-vocal-harmonies sound (Beatles/Hollies/Zombies) and the heady, textural soundscapes of Pink Floyd. This year The Moody Blues are touring to celebrate the 50th anniversary of Days of Future Passed, the landmark LP that put them on the map. But in many ways, AQOB was their true game-changer.

PS. You may also enjoy our posts on concept albums you may have missed and readers’ favorite concept albums. Plus, check out Take an “Odessey” With The Zombies and Making a Personal Connection to Pink Floyd’s “The Final Cut.”