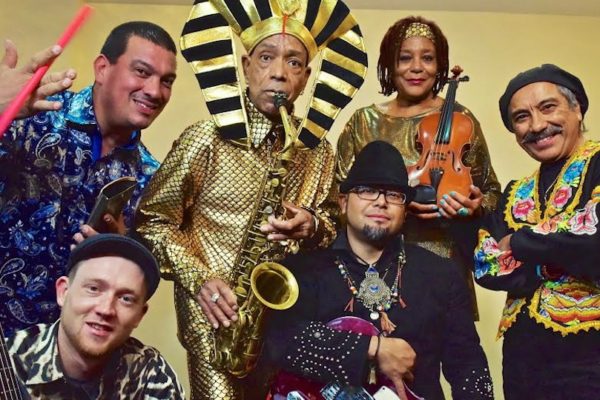 Jazz lovers, don’t get into a needless “reissue” rut. Sure, that 60th-anniversary deluxe edition of Sonny Rollins’ Way Out West is a wonderful thing. But jazz is a constantly renewable stream that branches off in new directions, even as it revisits old tributaries; and sometimes the latter precipitates the former. In the case of this disparate batch of new and upcoming albums, that stream encompasses elements of post-bop, blazing rock tonalities, Afrobeat rhythms, straight-up standards, avant-garde electronics, and more. And the international cast of characters includes Italians, Estonians, and Irishmen alongside a handful of Yanks, each one popping into the flow with their own singular slant.  Here are some new jazz releases worth finding.

Idris Ackamoor & The Pyramids’ An Angel Fell (May 11, Strut)
Purveyors of a spacey brand of spiritual jazz equally indebted to Pharoah Sanders and Sun Ra, The Pyramids formed in the early ’70s and released a string of albums beloved to collectors. Since reuniting in 2012, they’ve picked up where they left off with a new run of vital LPs. Their latest is an electrifying effort that blends surging, percussion-heavy Afrobeat grooves with trippy but somehow organic textures, avant-jazz explorations, and a strong socio-political consciousness, with Ackamoor’s fire-starting sax at the forefront.

The Vinny Golia Sextet’s Trajectory (Mar. 30, Ninewinds/Orenda)
Sax man and bandleader Vinny Golia has been making waves since the ’70s, becoming one of the most consistent and uncompromising forces in West coast avant-jazz.  Bronx-born Golia has spent more than 10 years slamming it out in sextet mode, and on the double-album Trajectory, he and his cohorts strike the perfect balance between tension-filled control and unbridled chaos, airtight ensemble moves, and fervid, free-wheeling improv. The knottier and more intense things get, the higher Golia and crew amp up the excitement as flamethrower sax lines collide with blazing guitar riffs and a hurtling, shape-shifting rhythm section.

Van Morrison & Joey DeFrancesco’s You’re Driving Me Crazy (Apr. 27, Sony Legacy)
Van has dipped freely into jazz whenever it suited him, but this is his second jazz album in a row, arriving just a few months after Versatile. Like that record, You’re Driving Me Crazy features jazzy new takes on older Morrison tunes alongside jazz standards. Van’s lifelong gift for improvisation serves him beautifully in this mode, and with renowned jazz organist Joey DeFrancesco as his foil, things swing on an even deeper level.

Kristjan Randalu’s Absence (Apr. 6, ECM)
This unusual, international trio led by Estonian pianist Randalu features U.S. guitar phenom Ben Monder and Finnish drummer Markku Ounaskari. Randalu is the son of an award-winning classical pianist, and the more impressionistic side of classical music informs some of his harmonic and melodic choices; at times he comes off like a modern-day Bill Evans. And interacting with Monder’s liquid lines and Ounaskari’s empathetic polyrhythms on his first session for the storied ECM imprint, Randalu shifts from languid to roiling and back again with a striking seamlessness.

Slivovitz’s LiveR (Jan. 5, MoonJune)
Italian octet Slivovitz lets it all hang out in this live recording, where their characteristically urgent approach gains an even more visceral impact. From tune to tune, they may be angular and funky, abstract and evocative, or assaultive and unrelenting, as horns vie with violin and guitar for the foreground, with a gravitas-laden rhythm section underpinning it all. And their brain-shattering version of Nirvana’s “Negative Creep” makes The Bad Plus’s similar efforts seem slack-jawed by comparison.

Dan Weiss’ Starebaby (Apr. 6, Pi Recordings)
Ben Monder pops up again here, but in a completely different context. Drummer Dan Weiss has worked with the likes of John Zorn and Chris Potter, but both he and bassist Trevor Dunn have also played balls-to-the-wall rock, and there’s an undeniably in-your-face stance to Starebaby. With Matt Mitchell and trailblazer Craig Taborn on keyboards and electronics and Monder swapping his signature contemplative style for some raucous rolling and tumbling, these bracing tunes alternate between foreboding tension and crunching, grinding, all-out melee; Zorn followers should be able to find their way into it easily enough, and on the rock side, King Crimson fans might want to sneak a peek. But really Starebaby is for anybody with wide-open ears and a taste for extremes (and a tolerance for creepy cover art).