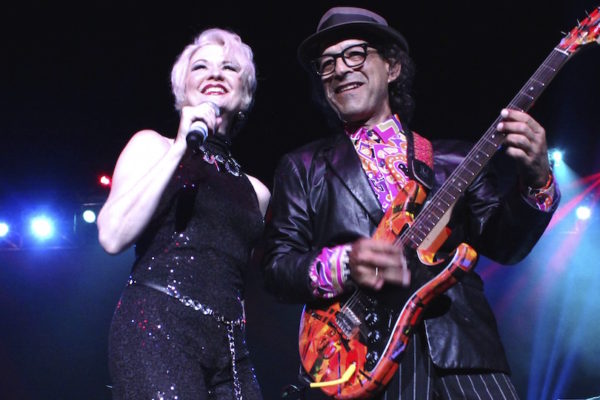 “Happiness is so hard to find” goes one unforgettable lyric in Nu Shooz’s impossible-to-resist bit of pop perfection “I Can’t Wait.”  Yet the 80s band has been making happiness pretty damned accessible everywhere they go — and everywhere that song pops up —for nearly 40 years.  And thanks to an unending nostalgia for all things from that decade, they’ve been able to continue to spread their feel-good vibe well into the current day. With that in mind, as you might expect, our interview with longtime lead singer Valerie Day was filled with positivity whether she was talking about the past, the present or the future. Read on…

Q: Seattle may be the world capital of grunge but Portland actually has a much more eclectic pop music history with The Decembrists, Pink Martini, The Dandy Warhols, and even The Kingsmen… What is it about your hometown that fosters such a wide array of sensibilities?

A: When we were forming Nu Shooz back in 1979, Portland was an undiscovered gem. It was cheap to live here, and there was a lively music scene just under the radar. There was a thriving Latin/African music community. The blues and bluegrass were well represented. Jazz and Big Band music were happening. Then in the ‘80s, the liquor laws loosened up and suddenly there were all these places to play. Plus, it rained nine months out of the year, so there was nothing else to do but work on our craft.

Q: Your own band has undergone a number of changes since originally forming in 1979. Needless to say, you and your husband John Smith have been part of every iteration. But have any other musicians been with you since the beginning?

A: Nu Shooz has been through about seven incarnations since ’79. We think about seventy people have been through the band in 37 years. It sounds like a lot but really every seven years is a mini-lifetime. Our bass player, Gary Fountaine, has probably been on board the longest. He joined back in ’83, but we knew him since he was about 16. Our original Trumpet player, Lewis Livermore was in the band for seven years. He’d be the second runner-up. Why? Who knows? We ran a good ship and we had the wind in our sails.

Q: Your signature song “I Can’t Wait” surfaces in a number of movies (Hot Tub Time Machine, You Don’t Mess With Zohan). Do you have a favorite use of the song in the movies?

A: There was British film called Son of Rambow that was a really good movie. They used “Point of No Return.” We were especially proud to be in that one. Another recent favorite is The Big Sick. We enjoyed the movie so much we completely missed hearing “I Can’t Wait” in the scene that it was in! Great script.

Q: That song’s unforgettable bass line popped up in the rap hit “Buzzin’.” It must be cool to hear your own music so clearly inspire another song. Who’s inspiring you though?

A: “Buzzin'” was a great song, very positive. They did a fabulous job on that record. We don’t give permission to just anyone to use our tracks. No guns, no misogyny, no expletives. We always say, “This is a family show!”

As for who inspires us, well… Our tastes are pretty eclectic. Brad Paisley is probably the greatest guitar player on the scene today. Stellar songwriting too. And Esperanza Spaulding is taking jazz in a brand new direction.

Q: Your own first television appearance was on American Bandstand. What do you remember about that gig?

A: Dick Clark was just a wonderful guy; a real gentleman. He had each band introduce every member because he knew their moms would be watching.

Q: You’re touring fairly extensively this summer. Is there a city that you particularly like to play in?

A: The response to these ‘80s tours has been fantastic. Everywhere we go the crowds span multiple generations, and they’re so happy to hear these songs again. We’ve been all over the place in the last six years. It would be hard to single out a favorite city. Fresno has always had a warm spot in our hearts. And we really loved going to Philadelphia and Boston, which we’d never been to before.

Q: Is there an ’80s band that you haven’t shared the stage with yet that you’d like to?

A: Over the last five years we’ve gotten to play with some of our favorite ‘80s bands — both on the Pacific Concert Group shows, and the Lost 80s tour. Two bands we haven’t had the pleasure of playing with are Tears for Fears and Swing Out Sister. We love both bands’ harmonic sensibilities. They mix it up like we do — a little psychedelia, a little jazz harmony, dance beats, and Latin rhythms swirled together. Hope we get a chance to share the stage with one or both of them one day.