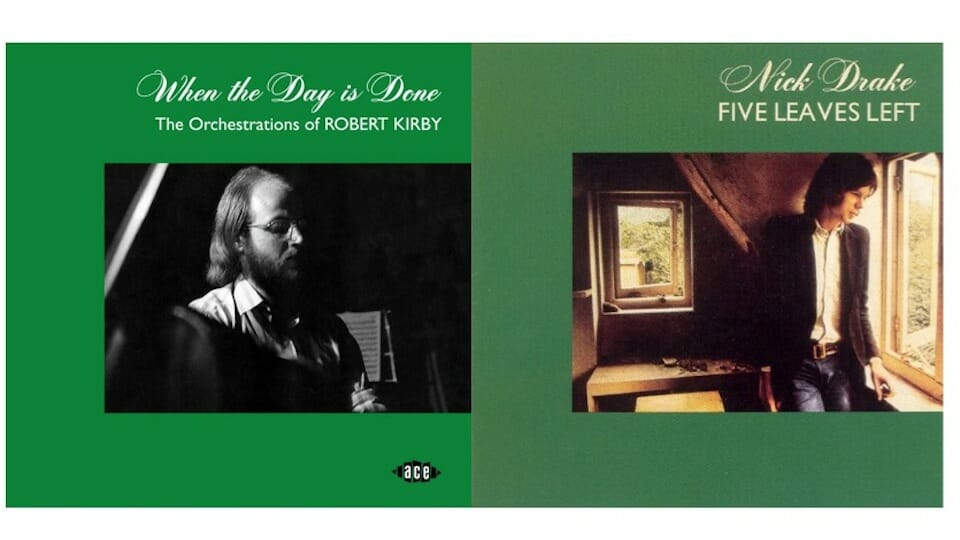 Super-shy English folkie Nick Drake, who died over 40 years ago, barely had a career during his lifetime — just three albums that sold minimally plus a handful of live appearances. Yet he continues to rejuvenate the reputations of many who worked with him decades later. Indeed, When the Day Is Done: The Orchestrations of Robert Kirby is simply the latest example of Drake’s posthumous power. This welcome compilation surveys the largely unheralded work of one of Drake’s Cambridge chums who first made his mark with the rich yet restrained orchestrations of four songs on Five Leaves Left, the singer-songwriter’s 1969 debut album.

While only a single Drake instrumental is included here (the 90-second “Introduction” from Drake’s second album Bryter Layter), there’s much to like in the other performers, who mostly lean to Drake’s quiet introspection and sometimes feature the same gentle, pastoral sound that Kirby brought to his string arrangements for Drake. “English and melancholic, closer to Vaughan Williams than Phil Spector” is how Bob Stanley’s extensive liner notes describe it. And he’s right. “Dancing at Whitsun” is a gorgeous, string-laden tribute to that most English of holiday celebrations courtesy of Tim Hart and Maddy Prior who recorded it just as they were launching the pioneering — and decidedly electric — folk-rock band Steeleye Span. Elsewhere, Kirby’s lively strings all but carry “I’ve Seen the Movie,” Andy Roberts’ lengthy, slightly mopey account of a failed love affair.

So quintessentially British was Kirby — who died in 2009 while working on a live Drake tribute — even the embellishments to his string arrangements favor native instrumentation. “On Rainbow River,” by Vashti Bunyan (another cultishly revered Brit who’s enjoyed a career renaissance), finds Kirby using an evocative quintet of recorders, that most English of instruments, to deepen the mood. For Sandy Denny’s cover of the country chestnut “Silver Threads and Golden Needles,” Kirby offsets its Nashville heritage with the use of a silver band, a village-green assemblage that evokes Anglicana as surely as banjo and fiddle evoke Appalachia. Layering uilleann pipes atop strings for Richard and Linda Thompson’s “First Light” lends a soulful Celtic element, even a slightly Middle Eastern one, perhaps as a nod to the Thompsons’ devotion to Sufi Islam.

Even with 20 selections, this mere disc’s worth of Kirby leaves one hungry for more. For reasons of runtime, the album omits one of his most masterly arrangements, of strings and choir for Ralph McTell’s epic “The Ferryman,” in favor of the shorter “Pick Up a Gun” from the same LP. A more expansive collection might also have featured the eight other Drake-Kirby collaborations, the Elvis Costello and Paul Weller tracks from Almost Blue and Heliocentric respectively, and his orchestral settings for Mike McGough’s poem saga “Summer With Monica.”

See Related: “The 10 Best Elvis Costello Songs You May Have Never Heard”

Still, this Ace Records UK import — currently streaming on Spotify — offers both a fine primer to one talented collaborator as well as an introduction to some of Drake’s lesser-known contemporaries, including such solo acts as Keith Christmas and Steve Ashley and bands like Audience, Spriguns, and Spirogyra. Ultimately When the Day Is Done serves as a nostalgic reminder of the days, just before punk and synths, when obscure folkies somehow secured recording budgets that accommodated the addition of strings, choirs, and other now-quaint extravagances.

Photo Credit: Fair use images of LPs by Robert Kirby and Nick Drake.

0 comments on “Nick Drake’s Orchestrator Gets His Own Album”