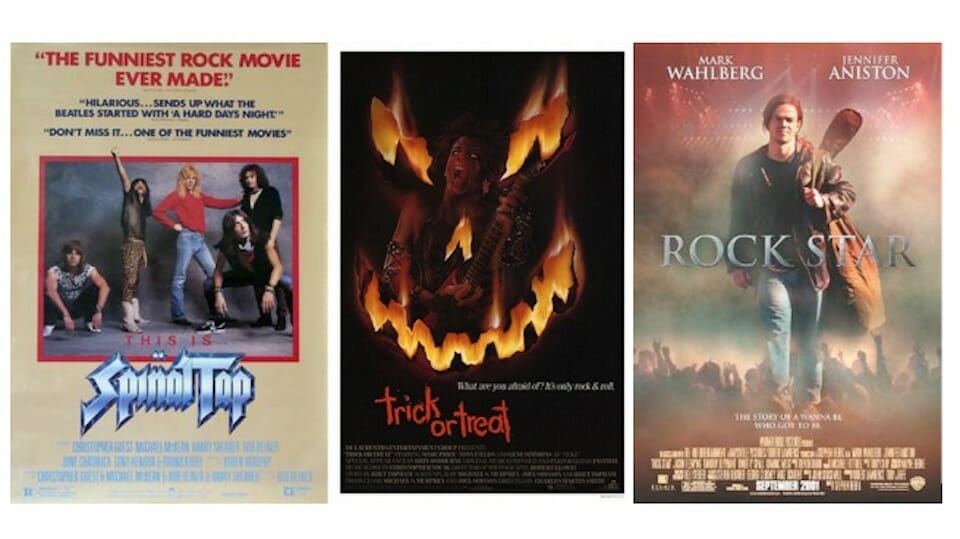 If you ask fans of punk rock for their favorite punk films (as I did), you’ll hear a lot of the same answers. Ask fans of heavy metal the same question, and what you get…is a lot more questions. What type of metal—Power metal? Goth metal? Movies that feature headbangers or just have great metal soundtracks? What about movies that influenced metal music and iconography, like Schwarzenegger’s Conan the Barbarian or Boris Karloff’s Black Sabbath? Metal’s been around a bit longer than punk and has a deeper film history, so narrowing down the list to just 10 will inevitably leave out worthy contenders.* But we’re paid to make the hard choices, so here are 10 essential films that every true metalhead should see.

The best heavy metal movies tend to fall into one of three genres: documentary, comedy, and horror. Rob Reiner’s groundbreaking “mockumentary” combines the first two in the form of a love letter to a third-tier, touring metal band, resulting in an improvised masterpiece that is one of the most quoted comedies ever. Many of its most outrageous scenes are based on actual rock star mishaps, including vicious feuding in recording sessions (The Troggs), getting lost backstage (Tom Petty), being trapped inside malfunctioning stage props (Yes), and ordering a mis-sized Stonehenge (Black Sabbath, though in their case it was too big instead of too small). On the soundtrack: Spinal Tap

Eddie, a superfan of recently deceased satanic rock star Sammi Curr, discovers he can talk with his dead idol by playing a copy of Curr’s unreleased, final record backward. At first, the dead star helps get revenge on the bullies that torment his teen fan, but before long the violence gets out of hand. By no means is Trick or Treat a great horror film, but it nails heavy metal, both in spirit and in the details, including casting Gene Simmons as a local DJ and Ozzy Osbourne as an anti-rock preacher. On the soundtrack: Fastway (a band founded by former members of Motörhead and UFO)

When a portal to a dimension of demons opens up in the backyard, what’s a kid (Stephen Dorff, in his first role), his best friend, and his big sister to do? Why, scan the friend’s heavy metal collection for just the right, backward-masked incantation needed to seal the gate for good. The Gate is a kid-friendly cult classic that taps into many of your worst childhood fears—from what’s under the bed to parental abandonment. On the soundtrack: Fictional band Sacrifyx

4. The Decline of Western Civilization Part II: The Metal Years (1988)

Armed with a bigger budget and lineup of talent (Ozzy, Lemmy, Alice Cooper, KISS, Poison…), director Penelope Spheeris set out to do for late ’80s LA hair metal what her first Decline did for early ’80s LA punk. What we get is a fascinating portrait of peak glam rockstar decadence: Aerosmith’s Steven Tyler humble-bragging about the millions he’s spent up his nose, and W.A.S.P.’s Chris Holmes rambling about his alcohol-soaked existence as his mother lounges stonily poolside. Spheeris also gives ample screen time to a host of wannabe rockstars chasing their metal dreams, blissfully unaware that the one-two punch of grunge and hip-hop are looming just over the horizon. On the soundtrack: Alice Cooper, Faster Pussycat, Lizzy Borden, Megadeth

Then again, dreams sometimes do come true. Case in point: This fictionalized version of Tim “Ripper” Owens’ story stars Mark Wahlberg as a struggling singer pulled from obscurity to front a Judas Priest-like band. Of course, the rock-star life messes with his head and derails his relationship with his girlfriend (Jennifer Aniston), until he can discover his authentic voice. On the soundtrack: fictional bands Steel Dragon and Blood Pollution (with vocals by Journey’s Jeff Scott Soto), plus Mötley Crüe, Ted Nugent and Bon Jovi

Heavy metal…therapy? What started as a simple documentary about Metallica on the eve of recording their eighth album turned into a riveting glimpse of nothing less than a band in crisis. First, their bassist quits which only increases tensions between drummer Lars Ulrich—fighting a legal battle with Napster—and frontman James Hatfield, who departs without notice for rehab. Metallica’s management hired a “performance coach” to help the group get back on track, as the cameras continued to roll. The results are an eye-opening exercise in radical transparency rare among music superstars, even today. On the soundtrack: Metallica

Filmmaker, anthropologist, and longtime headbanger Sam Dunn charts the history and evolution of metal in all its forms, from precursors like Zeppelin and Hendrix through subgenres like Thrash, Grindcore, and Death Metal. But this Journey is far from a dry academic exercise, as Sam and his fellow filmmakers share the joy of this larger, louder-than-life music with everyone from fans on the street to many of the lords of metal themselves. On the soundtrack: Iron Maiden, Black Sabbath, Motörhead, Rush, Slayer

Whoever said “where there’s a will, there’s a way” was probably not thinking of Anvil, a Canadian metal band who climbed up to the edge of stardom in the ’80s, only to slide back into obscurity. The film follows the aging, ever-hopeful rockers as they head out on an ill-fated European tour (akin to Spinal Tap) and try to scrape together the money to record their thirteenth album. Surprisingly funny, Anvil’s one of the best rock docs ever made. On the soundtrack: Anvil

After witnessing the death of her beloved older brother to a gruesome farming accident, a young girl picks up his guitar, his band t-shirts, and his love of metal. Years later, she has grown into a young woman still consumed by rage and grief, fueled by metal and alcohol, and even more isolated from her family and the larger community in her rural Icelandic town. Yet the music that sets her apart may also hold the key to dealing with her problems. On the soundtrack: Lizzy Borden, Riot, Megadeth, Judas Priest

The children of the ’80s who drove their parents crazy with loud “devil music” have since grown up to have children of their own. So, it’s only fitting to conclude our list with a recent indie horror film told from the point of view of one such metalhead parent. Ethan Embry plays a struggling artist and husband who shares his headbanging ways with his metal-loving, tween daughter. But when their family moves into a new farmhouse, dad starts hearing troubling voices, while a creepy former resident takes an unholy interest in his family. On the soundtrack: Sunn O))), Metallica, Pantera, Slayer

Photo Credit: Fair use images of posters for This Is Spinal Tap, Trick or Treat and Rock Star.