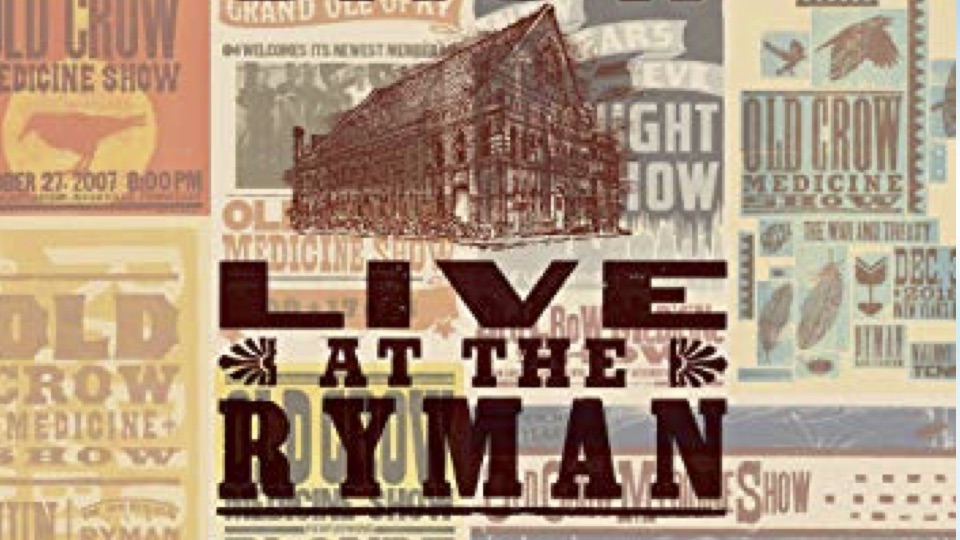 They call it “The Mother Church of Country Music”. It sits facing Fifth Avenue in downtown Nashville and served as the home of the Grand Ole Opry from 1943 to 1974. Country’s best and brightest have graced its stage over the years but this venue is far from shutting its doors. It is the “Carnegie of the South”: the Ryman Auditorium.

And it’s where Old Crow Medicine Show has recorded their seventh record (Live At The Ryman), complete with ten live toe-tappin’, foot-stompin’ Americana tracks sure to get any crowd dancing. It features their hit “Wagon Wheel”, a song that was originally unfinished by Bob Dylan but now shares 50/50 copyright licensing with founding Old Crow Medicine Show member, Ketch Secor. Plus, there’s a cover of the ever-famous folk number, ‘Will The Circle Be Unbroken?”

As far as Americana bands go, it doesn’t get much better than Old Crow Medicine Show. Slide guitar, mandolin, fiddle, upright bass, harmonica, banjo, and tight vocal harmonies create a sound that seems like it’s straight from the Tennessee Valley — the perfect mixture of bluegrass, country, and mountain music. The six members of Old Crow Medicine Show sound like they would be just as at home singing these songs around a campfire as they are on the Ryman stage.

So how does one get to headline the Carnegie of the South? Besides lots of practice, it takes years of hard work. Old Crow Medicine Show started busking on the streets of New York State and up through Canada in 1998. When they wound up in Boone, North Carolina, a particularly special onlooker, Doc Watson, took note of them. He invited them to play his festival, MerleFest, and soon after they found themselves playing in between acts at the Grand Old Opry. Since then, their success has only increased. They were inducted into the Grand Ole Opry in 2013, and their 2014 record Remedy won a Grammy for Best Folk Album.

2019 has been a year of shedding new light on country music and the communities of people it involves. Ken Burn’s recent eight-part documentary series on the history of country music proved that the genre is integral to America as baseball and the Fourth of July. Old Crow frontman, Ketch Secor, served as an early advisor on the film.

“I think our desire to put the record out had a lot to do with the Ken Burns film, to be able to do a further embrace of the movie by letting an audience know: Here’s this band that has asked itself the question, ‘Will the circle be unbroken?’ for the past 21 years, and has done its best in the spaces of country music to ask that question”, Secor told JamBands.com. “The Ryman looms very large in the collective heart of country music fans. We’re a band that’s had this really special privilege of being able to be something of a house band in it. The Ryman, like country music as a whole, is a place that collects a whole lot of very different roots, all into one tree.”

“It always sounds a little sweeter at the Ryman Auditorium,” says Secor before jumping into the first verse of “Wagon Wheel” on the record. Secor leads the band through the song but it’s the Ryman crowd who really lend their vocals. The Ryman only seats just under 2,400, but you wouldn’t know it when the band pauses their playing and lets the audience sing the chorus a capella. With over 40 performances on the Ryman stage, Old Crow Medicine Show feels rightfully at home on this album.

0 comments on “Old Crow Medicine Show Live At the Ryman: Americana At Its Best”