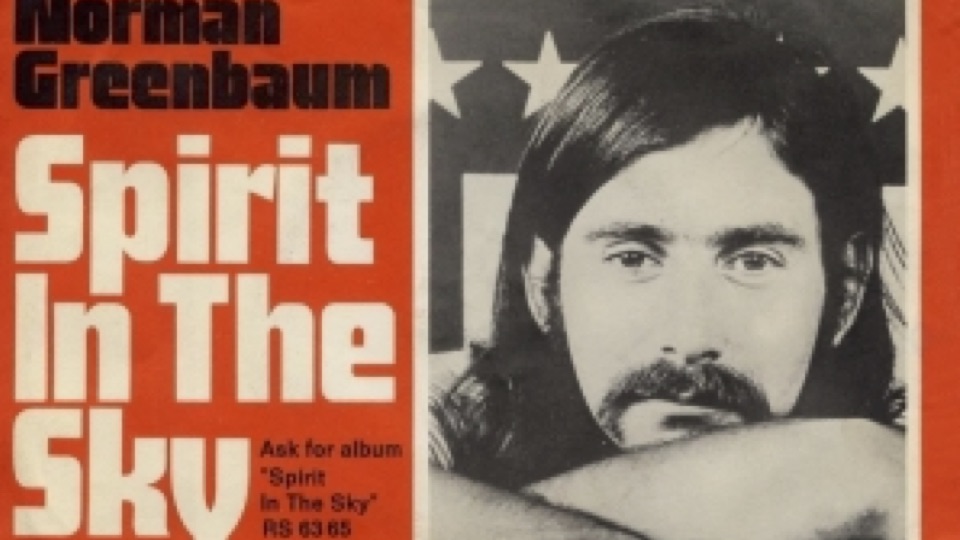 “Spirit in the Sky” captivates you as soon as you hear that unmistakable fuzz-toned guitar in the song’s opening, which is quickly joined by drums, bass, handclaps, and those gospel-flavored backing vocals. Written and performed by Norman Greenbaum, “Spirit in the Sky” spent 14 weeks on the charts upon its original release, eventually reaching number three in the US. So how did that bit of good fortune fall upon such a quirky tune?

Norman Greenbaum grew up in Malden, Massachusetts, playing in bands both in high school and college. He studied music at Boston University, but eventually dropped out and moved to the West Coast. Once there, he helped form the psychedelic folk group Dr. West’s Medicine Show and Junk Band, who scored a minor hit in 1966 with “The Eggplant That Ate Chicago.” After that band broke up, Greenbaum played in a couple of other short-lived groups before starting work on a solo record. Ironically, the title track of 1969’s Spirit in the Sky wasn’t the first single from the album. Greenbaum’s label, Reprise Records, tried issuing a couple of other songs first, but they didn’t make a dent in the charts or gain significant radio airplay.

“Spirit in the Sky” became an instant hit upon its release, climbing steadily up the charts in both the UK and the US in late 1969 and early 1970. Greenbaum, who is Jewish, has recalled in interviews that he set out to write a gospel number, feeling there was a good market for that type of music. The memorable guitar sound for “Spirit in the Sky” was achieved by using a Fender Telecaster with a fuzz box built into the body of the instrument. The backing vocals for the tune were performed by The Stovall Sisters, an Oakland-based gospel trio. The song’s unique sound and its combination of rock ‘n roll and religion propelled it to become a ubiquitous hit, inspiring several sound-alike covers. A young Elton John even covered the song while he was a singer for hire, recording sound-alike versions of radio hits for budget-priced pop hit compilations in the UK.

None of the other songs on the disc had the impact of “Spirit in the Sky” though the album also featured psychedelic pop numbers such as “Marcy” and off-the-wall tunes like “Canned Ham.” Greenbaum recorded a couple more albums, including 1972’s Petaluma, which was named after a California dairy farm he owned at the time. That record, which featured guitar work from the one and only Ry Cooder, was Greenbaum’s last original release to date. He retired from music during the 1970s, though he’s done occasional live performances in the ensuing years. Greenbaum also continues to do interviews about his career, and the legacy of his unforgettable hit.

The story of “Spirit in the Sky” doesn’t end there, however. The song became a hit for yet another “one-hit wonder” in the 1980s. A British group called Doctor and the Medics recorded a cover of the song for their album Laughing at the Pieces in 1986. Their groovy version topped the UK charts, and the video for the song was featured on MTV here in the US. While Doctor and the Medics did land a couple of other singles on the charts, their version of “Spirit in the Sky” was their most successful release.

“Spirit in the Sky” became a hit in the UK a third time in 2003 for Gareth Gates, when it was released as a charity single for the UK edition of Comic Relief. “Spirit in the Sky” has also been featured in countless commercials, TV shows such as House and Supernatural, and numerous movies including Wayne’s World 2, Contact, the Steven Soderbergh version of Ocean’s 11, and the trailer for Guardians of the Galaxy. The spirit of “Spirit in the Sky” lives on!

3 comments on “The One-Hit-Wonder File: “Spirit In The Sky””