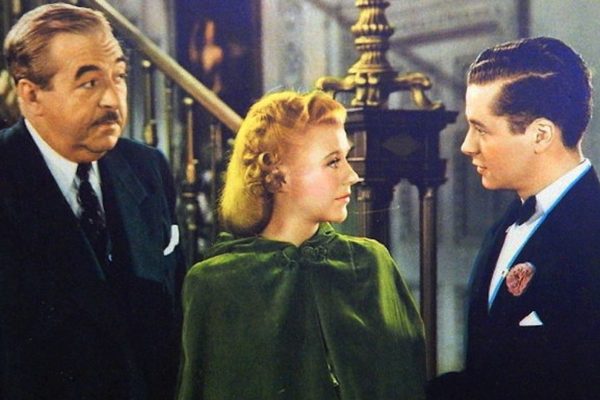 When we watch vintage movies, we aren’t just experiencing the story and characters onscreen, but also a time capsule of the era in which the film was made. It’s not just the hairstyles and hemlines that seem trapped in time or the slang that’s outdated, but often entire viewpoints and mores that seem out-of-touch with the way we live today. Yet there are some films that present ideas and characters that seem to belong more to modern times than the eras they were created in.

As the titular “girl” in Fifth Avenue Girl (1939), Ginger Rogers is not quite the sugar n’ spice sweetheart who danced with Fred, but rather a tough, cynical dame. Ever think you’d see America’s sweetheart pull a knife on someone? Here’s your chance. An older rich fellow hires Ginger to pose as his mistress because his family ignores him and, naturally, Ginger fixes everyone’s problems. (During the ‘30s, “poor person wanders into rich family’s life and fixes it” was a genre unto itself.) Ginger facilitates a romance between the daughter and the chauffeur — who spouts sentiments such as, “You’re a capitalistic pawn!” and generally sounds like a Facebook socialist. But Ginger also helps get the parents back together as well:  in a mature, sexy, witty romantic scene, with the wife luring her husband by making “comfort food” to her flirtatiously holding the bedroom door open afterward. Screenwriter Allan Scott, a Rhodes scholar, was best-known for musicals, which may account for the light touches in this movie.

Kay Francis had a reputation as a glamour star, draped in furs and jewels, yet she also played uncompromising professional women, as her roles in Mary Stevens, M.D. (1933) and Dr. Monica (1934) attest. In Mary Stevens M.D., she becomes pregnant out of wedlock, yet keeps both the baby and her career. For decades, women had given up every career, from store clerk to opera singer, in order to play housewife;  but by the end of the film,  Francis is still slinging her stethoscope. As for Dr. Monica, this one is so soapy as to be surreal. But it’s the open treatment of premarital sex and pregnancy (again), and women’s dedications to their careers — doctor, architect, aviator — that still registers as beyond the norm for any era.

Another ahead-of-her-time woman (if less competent and benevolent) was Bette Davis in Beyond the Forest (1949), a sort of noir version of  Madame Bovary that Davis didn’t want to make and was embarrassed by. What sets it apart is Davis’ ruthlessness and a cynicism so solid it’s ossified into nihilism — which makes her seem more like an “aughts” antihero than a ’40s leading lady. Of her hometown in the movie, she says, “Life in Loyalton is like sitting in the funeral parlor and waiting for the funeral to begin. No, it’s like lying in a coffin and waiting for them to carry you out.” When her husband returns from helping an impoverished woman bear her eighth child, Davis questions why a woman would have so many kids, especially when they can barely feed them–a query that was considered appalling then but seems utterly logical now. The chief scriptwriter for Beyond the Forest was a woman, Lenore Coffee, which might account for why the movie doesn’t apply the usual cinematic sugarcoating to the feminine condition.

Writer-director Billy Wilder’s work always had a timelessly cynical edge but never so much as with Ace in the Hole (1951), his prescient look at sensationalist American media. Kirk Douglas is a washed-up newspaperman who finds his big comeback story when a man gets trapped in a mine. From the reporter selling death in little slices, to the vacationing families who come to buy a piece along with a hot dog and a soda, to the “grieving” spotlight-seeking wife, no one is innocent… well, except the guy who’s doomed.

Another film with a contemporary feel is A Face in the Crowd (1957).  A pre-“Mayberry” Andy Griffith plays “Lonesome Rhodes,” a blustering drifter who meets PR woman Patricia Neal and, under her guidance, becomes a TV star and then a malevolent, egomaniacal populist politician. Rhodes is ultimately brought down when audio of him disparaging his followers is broadcast.

Director Elia Kazan and writer Budd Schulberg had also examined how power corrupts in On the Waterfront, but that Brando film feels like a time capsule, whereas A Face in the Crowd registers as a reflection of our media-minded present. Sometimes a film from the past can also teach us something about the world we live in today. Watch and learn.

-PS. Five more films about Hollywood.  And some “bad movies” that deserve our attention.