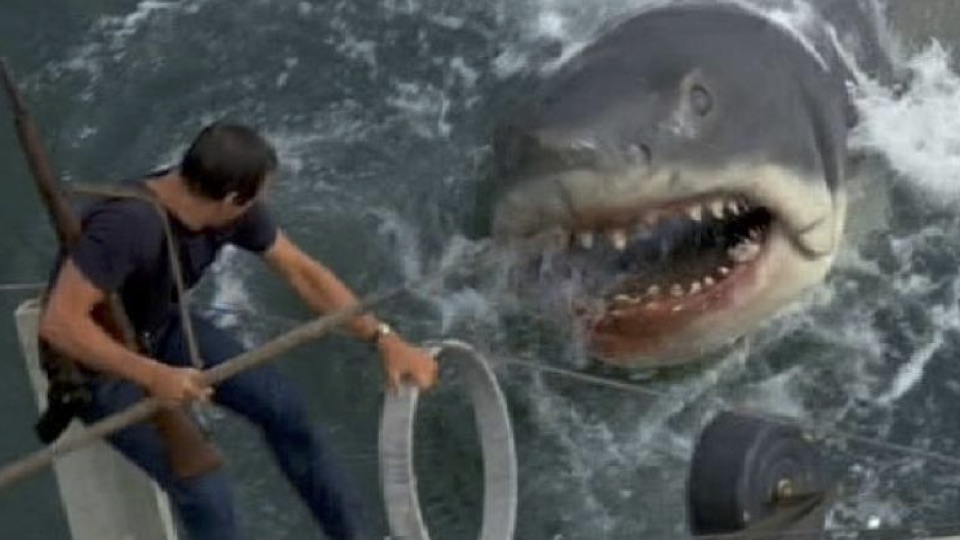 In 1975, a new kind of monster was born. Steven Spielberg inarguably changed the monster movie genre for good – arguably for the better – with the intense, claustrophobic nightmare we’ve come to love as Jaws. While there had been stories about monsters scaling skyscrapers and beaming down from outer space, now there was a new beast on the block. Frighteningly, it was one bobbing about in our own waters.

There are now well over 100 different ‘shark movies’ and counting. The genre actually dates back much further than Jaws, with the Roddy McDowall adventure Killer Shark from 1950 likely being the earliest example of a Hollywood munch-fest. That means our love of finned, fanged frighteners is almost 70 years old. Who’d have thought that our appreciation for this niche would still be going strong?

As summer approaches, so will open-air screenings of Jaws, Sharknado, Timotera, The Deep, and a whole host of aquatic nasties. Naysayers may well think that if you’ve seen one shark-infested spectacle, you’ve seen them all. That’s never been the case. As time has moved on, and as the bar has been raised for high-stakes horror, shark-related gruesomeness has only gotten more and more grotesque, and more inventive. As you may well have seen, that’s with or without a sizeable budget.

Monster movies have always been patently ridiculous, while weirdly grounded at the same time. Sharks are appealing because they are, in one way, familiar. They share a planet with us – they’re neither King Kong nor Cthulhu, they’re not fictitious abominations. This genre – as strange as it’s become – has roots in deriving horror from situations which could hypothetically happen. Spielberg’s Jaws didn’t go over the top, at least, not in hindsight.

Much of the horror in Jaws lies in the unknown. We don’t actually see the shark all that much. We just feel the threat, permeating through the direction. The claustrophobia on the boat in the later scenes is absolutely petrifying. At least it was at the time.

Sharks are portrayed as these relentless, mysterious killing machines. Jaws made use of props where necessary, but it was the threat of an impending, unavoidable and likely very painful death that drove the horror home. The famous fin above the waves, that simple, unmistakable score. The horror in Jaws, even when you watch it again today, largely revolves around the slow approach of a bloodthirsty fish, not so much the spectacle.

This is where shark movies went off-piste a little. Jaws’ own ream of sequels upped the stakes and made things more intense, though not in a directorial sense. The plotlines became more bizarre – the shark’s own descendants return to take ‘revenge’, for example – and with the 1980s being rampantly fixated on rubbery SFX and gore, the subtlety in the horror was gone. However, the sheer pleasure of watching these goofy movies remained.

The success of the shark movie is reliant on audacity. These are movies which are less terrifying in hindsight, but more curious. How far is the envelope going to be pushed? How are Jaws copycats going to attempt to reinvent the wheel on such small budgets?

The genre peaked in terms of cheesiness and pure spectacle by the time Jaws: The Revenge reached theaters in the late 80s, but it resurged thanks to Deep Blue Sea in 1999, firmly putting fish back on the menu – along with more than a few hapless humans. It wasn’t until the release of tongue-in-cheek movies such as the Mega Shark Vs series and, of course, Sharknado, that a new generation could tuck into their own legion of big, dumb, tooth-filled action. This run of movies, however, is perhaps more self-aware than those of the ’80s.

The current run of Sharknado movies – intentionally provocative in their sheer weirdness and audacity – takes a wry look at the shift the shark movie took in the decade following Jaws. This, in itself, has helped to change the game even further. Purposely kitschy animal disaster movies gave the shark movie genre “new gills” if you like. While these movies may have been feeling less welcome in recent years – thanks to rampant overkill – the game changed yet again in August 2018.

The Meg, starring Jason Statham, proved box office soothsayers wrong as it went on to score over $500 million worldwide in theaters. That’s an incredible feat, especially given the fact that many believed it would sink without trace. Meg, based on an ongoing series of prehistoric aquatic sea monster novels written by Steve Alten, takes the shark movie back to its roots. It’s gloriously over-the-top, and knowingly so. Naturally, with so much box office cash behind it, a sequel is being drawn up as I write this.

The Meg seems to complete the journey of the shark genre, full circle. From origins in the B-movie to the sinister threats of Jaws, through to the cheesy copycats of the 80s and pastiches of the 00s – 2018’s box office shock brings together the best parts of the genre thus far. It has creeping dread, it’s knowingly silly, and yet it benefits from laser-sharp focus. It knows the story it wants to tell, and it does so – with scary creatures and all the hapless human fish-food you can shake a bag of krill at.

We love shark movies because they transform something familiar, yet mysterious. Regardless of whether you watch Jaws, Deep Blue Sea, Sharknado 5, Three-Headed Shark Attack or The Meg, you know you’re in for a very special kind of monster madness. It’s dumb escapism at its most straightforward and doesn’t always need a big budget. The threat of a fin above the water and a creeping score is – for plenty of us – going to be enough. Is it safe to return to the water? Probably not!

0 comments on “Open Wide: Why Do We Love Shark Movies?”