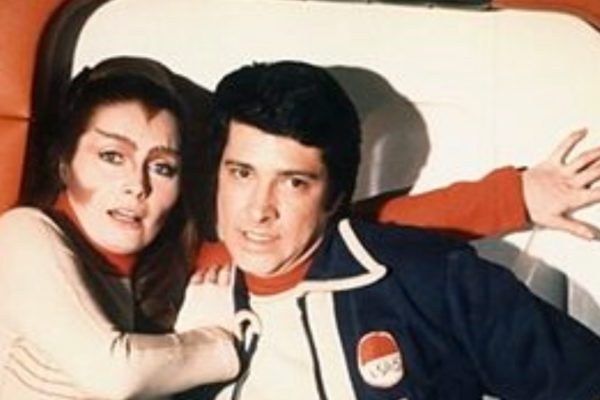 There’s a certain nip in the air — not to mention a crop of plastic pumpkins in the CVS window — which can only mean one thing: Halloween is drawing closer. For fans of horror, there’s an embarrassment of riches on TV and streaming services. But as you pick your way through the various newer series, don’t miss out on a wealth of old-school, horror TV classics streaming now. Some goosebumps are timeless, you know?

1. Night Gallery (1969-73)
Everyone knows and loves The Twilight Zone, but have you spent time with Rod Serling’s weirder follow-up Night Gallery? Where Zone served up sci-fi fables for the family, Night Gallery was, without question, a more adult affair with layers of sadism and existential dread. Start with two of the most iconic episodes: “The Doll” (based on a story by Algernon Blackwood) and “The Caterpillar,” a tale Stephen King called “one of the most frightening ever telecast on TV.”

2. Space: 1999 (1975-77)
If you like a little sci-fi in your horror, this one’s for you. Despite its space opera trappings, this cult classic starring Barbara Bain and the late Martin Landau offers some of the most terrifying scares ever inflicted in brightly colored, 1970s astro-jumpsuits. Make no mistake: This isn’t the safe, reassuring universe of Star Trek. The humans of Space: 1999’s Moonbase Alpha are launched into space, unprepared, by a nuclear explosion on the moon, jettisoning them away from anything they’ve ever known and into a cold, strange universe. Like The Thing and Alien, Space: 1999 combined science fiction conventions with timeless classic monster fright flick tropes such as ghostly possessions, mind-controlled zombies, and man-eating, tentacled beasties straight out of Lovecraft. It still freaks me out today.

3. Tales from The Darkside (1983-88)
If you like your scares ghoulish and goofy, check out the George Romero-produced Tales from the Darkside (too often confused with HBO’s also-excellent Tales from the Crypt). Don’t miss the seasonally-appropriate “Halloween Candy,” directed by FX master and frequent Romero collaborator Tom Savini, or “A Case of the Stubborns” featuring a teenage Christian Slater up against a recently deceased grandpa who refuses to stay dead.

4. American Gothic (1995-96)
There’s no Emmy for “Best Series Cancelled in Its First Season” but if there were this would be our nominee. American Gothic is such a series; if you haven’t yet encountered its charms, now is the perfect time to join this 1995 show’s cult. The series centers on a battle for the hearts and souls of Trinity, South Carolina where the residents are under the control of the charming, supernaturally powerful, and utterly evil Sheriff Lucas Buck (Veep’s Gary Cole). In the opening scene of the first episode, Buck conspires to gain control of a boy (Lucas Black), who may be his illegitimate son, by murdering the boy’s older sister (American Horror Story’s Sarah Paulson) and goading his father into suicide. Grim stuff, to be sure, but presented with a sly, sweet-tea cynicism. The series was created by Shaun Cassidy — yes, that Shaun Cassidy — and executive produced by Evil Dead director Sam Raimi.

5. The Kingdom (1994-97)
This Danish horror miniseries plays like a cross between Twin Peaks and ER. Created by director Lars von Trier, The Kingdom tells the story of a haunted hospital and the many dark secrets of its doctors, staff, and patients. It’s also incredibly funny as supernatural elements are backgrounded, at first, in favor of medical melodrama and dark comedy. But before long, the horror elements ramp up and it all comes together in glorious, anarchic fashion. Fair warning: a second season followed, but a promised third, concluding season was never produced. Still, don’t let the lack of closure scare you off from enjoying it, especially if the disturbing end of Twin Peaks: The Return left a Lynchian hole you’ve been itching to fill.

PS. While we’ve got you in the mood for some horror, check out our posts “Penny Dreadful” Gave Three Seasons of Top-Dollar Entertainment, “Bates Motel”: A Thrilling Take on a Classic, and When Zombies Hit the Web, “The Walking Dead” Goes Truly Viral.

2 comments on “Still Scary After All These Years: 5 Historic Horror TV Shows”