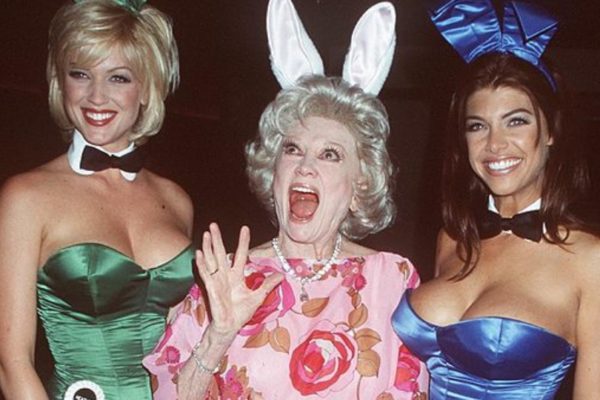 Hugh Hefner’s Playboy empire has infiltrated our culture on so many levels since its inception over half a century ago in 1953. From that first issue with a gleeful Marilyn Monroe on its cover, the magazine has set the gold standard for the debonair, sexually-liberated man who cares about the finer things in life as much as the wholesome (and naked) girls who would grace the centerfold. Or such was the spin. But Playboy’s influence goes way beyond that. Author Patty Farmer, the high priestess of the Playboy archives, is here to show us just how impactful that brown-paper-covered publication could be and she’s doing it with heart and hilarity.

In her new book Playboy Laughs, Farmer digs deep into the enormous influence that Playboy has had on the world of comedy. Shaping and molding our collective sense of humor, some of the finest, funniest illustrators — LeRoy Neiman, MAD Magazine’s Al Jaffee and Harvey Kurtzman, Jack Cole and Jules Feiffer, among many others — all got their big break in the pages of Playboy, titillating and educating their readership as well as poking fun at the gently prurient pictorials.

But Playboy’s influence extended beyond clever and crass comics within the publication itself. The genius of Hef’s vision led to franchised Playboy mansions for the wealthy and storied to visit while enjoying high-level debauchery. Nationwide Playboy clubs allowed the subscribing Everyman to pay a fee to get a (literal) key to Hef’s version of paradise, where he could eat and drink while served by pin-up-styled women in bunny ears, or hear jokes – no doubt, sometimes suggestive – delivered by some of the nation’s finest stand-up comedians. Hefner’s admirable willingness to see past the racist intolerance of the times allowed Dick Gregory, Flip Wilson, Redd Foxx and others to hone their skills and build their legend on the Playboy club circuit.

Lenny Bruce, Phyllis Diller, Joan Rivers, Lily Tomlin, the now all-but-forgotten, certifiable madman Professor Irwin Corey and iconoclast-for-any-era Mort Sahl were also nurtured in the Playboy Clubs. The tales they tell are almost uniformly delightful; Farmer serves these warm interviews up with great specificity and enthusiasm. Her level of research is remarkable, tracking down many leading comic lights of the day, some shortly before their deaths: David Brenner, Irwin Corey, Phyllis Diller, and Joan Rivers each were contacted in time.

Comedians are natural raconteurs, and their tales from their time onstage and on the road while on the Playboy Club circuit paints an ultimately captivating portrait of an era gone by. In changing times, brave comedians and visionary artists made generations laugh, think and shapeshift under the auspices of the bawdy but impeccably run Hefner universe, and they gained status and fame while doing so.

Playboy Laughs is written in a charming second-person style that draws in the reader as it opens wide the door to this world of high-level entertainment, gorgeous ladies, fancy repasts and suave escape. It also acknowledges the changing mores of America as it moved through the mid-20th century up through the late 1980s, when the clubs were all but shuttered and the magazine grew less impactful.

Painstakingly researched and more commemorative than critical, Playboy Laughs celebrates one cultural landmark’s glory days with lots of photos and cartoons plus frank and revealing interviews and the appealing voice of the author who acts as part charismatic professor, part friend. If you think, Playboy was just about T&A then she’s here to correct that by pointing your attention to another part of the body: the funny bone.

0 comments on ““Playboy”: A Compendium of Comedy, Cartoons & Conscience”