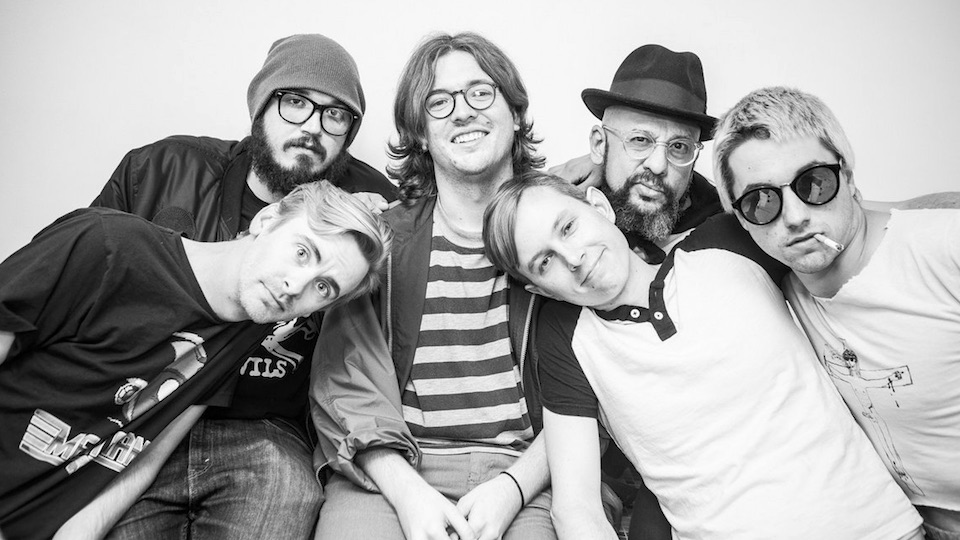 Editor’s Note: This interview with the group Playboy Manbaby was conducted before everything shut down due to the virus. Still, we think they’re an interesting act worth getting to know -and we hope that they’ll be able to get out on the road again before too long.

Phoenix, Arizona’s Playboy Manbaby is one of the most exciting live bands on the planet. Frontman Robbie Pfeffer is a revelation on stage kicking the show off at a fever pitch and never letting the energy come back down. Along with his bandmates TJ Friga, Chris Hudson, Chad B. Dennis, and Dave Cosme, Playboy Manbaby has been blanketing the country with their irreverent punk rock tunes and unyielding live electricity.

The guys spent most of 2019 on the road bringing their one of a kind live show to the masses, so now they have kicked off 2020 from within the studio dropping a brand new EP Debbie From Zumba. Along with the EP has come a bevy of music videos highlighting the band’s creativity as a multi-media force for weird art.

Q: Being a band whose reputation is steeped so heavily in its live performances how do you guys keep the energy levels up on a 40-date tour like the one Playboy Manbaby took last summer with Mac Sabbath and Okilly Dokilly?

A: We make our own cold-brew in the van. We are a machine that runs mostly on coffee. Also being trapped in a van for multiple hours is a great way to build up energy because you get released back into society and you wanna be anywhere but sitting down.

Q: Playboy Manbaby has become real believers in the music video over the years. Not only do you put out a lot of them, but they all seem to have been well thought-out and creative. Why do you choose to put so much of the band’s creativity into that medium?

A: I learned video editing when I was a kid and I really like and understand video. It makes more sense to me than music a lot of the time. I like the idea that a band can be a multi-media blob and that’s what we want to be. We stand on the shoulders of the art nerds of the past and you see bands like DEVO putting out these elaborate videos and shorts that kind of build the DEVO universe or Tom Waits Big Time. We’re visual creatures so it’s a visual extension of the music, also it’s super fun. It’s like being a kid again.

Related: “‘The Kids In the Hall’ Makes A Comeback”

Q: Having spent almost a third of 2019 out on the road with various bands including The Chats, Okilly Dokilly, and Mac Sabbath, what were some of the real highlights for Playboy Manbaby as a group?

A: The whole experience was amazing. A serious dream come true type of thing. Every night for months we got to wake up and the only thing we had to focus on was getting to a show and playing a show. It’s all one big blur in my mind that I’m still unpacking. We played so many good shows it’s honestly hard to even get a top 5 going in my head. We also got to play a lot of places we’ve never been to before. Just getting to meet people and try stuff out in front of a crowd where literally not a single person has ever heard of you is a hell of a lot of fun. Trying to convince someone to like your very specific and odd form of art in 45min or less night after night.

Q: Now of course along with the highlights comes the hijinx. What were some of the wildest things that happened on your cross-country jaunts last year?

A: So many things. I threw up in the van twice, we accidentally stayed at a cop’s house mid-divorce, I broke a rib jumping back on stage, I saw a guy in a leg cast fight off three guys with an electric scooter, I saw a lady pull an American flag out of herself then staple pages of the Bible to a guy in a Richard Simmons spandex outfit, I saw a lady lose a fight against no one, a guy passed out on our merch table then I saw him passed out in a fountain after the show. So much fun.

A: That was super fun. I got to bribe someone for the first time in order to get parking to show up to that. A guy literally said “I’ll take care of you if you take care of me,” then winked. We all looked at each other and were like, “Wait, are we supposed to bribe this dude?” and we did. Totally worth it. That whole place is amazing. Everyone brings their own influences to the table but for me, I grew up on classic punk records: Circle Jerks, Dead Kennedys, Dead Milkmen and nerdier theatrical stuff like The Aquabats, Toy Dolls and Valient Thorr. When I got to college I just started vacuuming up music, listening to anything and everything just because I could. I’ve always been attracted to people with very specific unique voices. Where you can really hear the person in the writing. The people who changed how I looked at writing lyrics were Yoni Wolf from Why? Sean from AJJ, Del The Funky Homosapien and Jonathan Richman. They all came into my life at the right time and made me see the craft in a new light.

Q: Playboy Manbaby released a record on Leap Day this year, tell us about Debbie From Zumba?

A: Debbie From Zumba is a 5 song EP that I think is pretty fun. We wrote all these songs in a cabin and they all came really easily and I think these songs reflect us at our most comfortable with ourselves as a band. We’ve been writing together for years and we’re all comfortable listening to each other and letting the weird ideas serve the song and I think that really comes through on this one. These are not selfish songs, these are not one member’s songs, these are all of us sitting in a room drinking beer and letting the ideas become whatever they need to be. It’s a real hodgepodge too, none of them really sound like the next one but they all sound like something we would do. The thing that links this group of songs is they are definitely real bare-bones structurally. Everything serves a purpose there’s no extra space at all.

Q: 2019 was a pretty big year for Playboy Manbaby. Now that Debbie From Zumba is out how are you guys intending to follow up in 2020?

Q: Playboy Manbaby has always been known for its sharp wit and sense of satire. As we barrel forward in time toward a heated election, under a global viral disaster, should we be braced for new Playboy Manbaby tunes in the near future?

A: I think we all try to have a sense of accountability to the world we live in, the reason we kind of bounce between playing songs that have social or political commentary and more interpersonal or straight goofy songs is because that’s just really how I am as a person. I don’t see any of that as separate, it’s all life. If you look in my brain I’m thinking about society and people and how they interact and also just a human being who wants to drink a beer and make dumb jokes with friends. Being a person is complicated, the world is complicated, and I don’t feel obligated to make it less complicated in the music we write. But I do feel obligated to try and understand people and have empathy for people because we’re all we’ve got. Also, we’re definitely gonna put out more music this year and it will also talk about some weird shit I don’t think anyone else would write a song about, as usual.

0 comments on “Playboy Manbaby Makes Weird Art In The Desert”