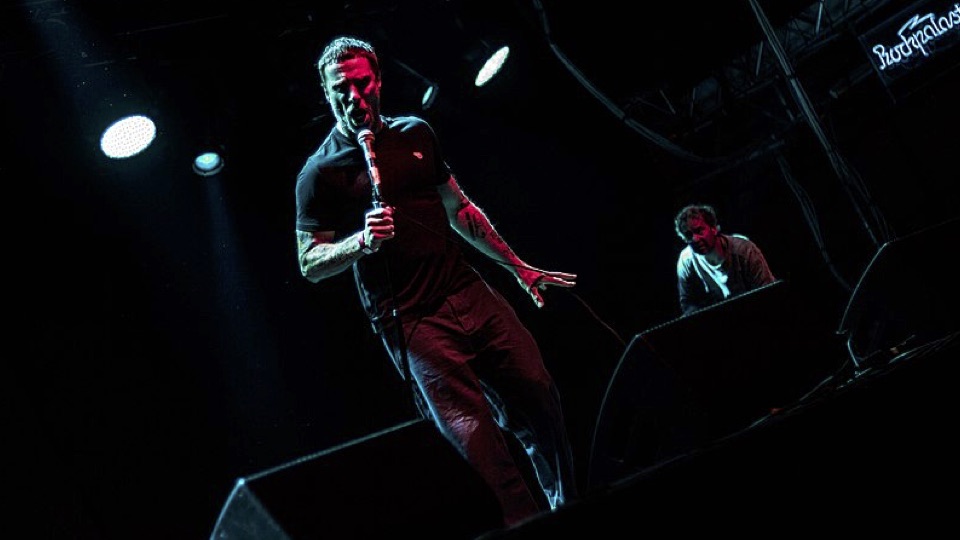 Music’s come a long way since Bob Dylan played three chords and the truth. Sleaford Mods, one of Britain’s most exciting duos, have discarded the three chords for the electro beat: but they’ve placed emphasis on their truth. The Independent described them as “electronic minimalist punk-hop rants for the working class.” Without Joe Strummer, John Lydon or John Lennon there to speak for them, vocalist/lyricist Jason Williamson has taken verbal swings at the many people he feels deserves them.

“Life is chaotic; the human form is chaotic.” Williamson recently told The Guardian. “As Alan Moore once said, we’re speeding towards a brick wall in a fast car. We’re animals. There are no solutions. But this music isn’t hate music at all. It’s good street music. And on the street, it’s never nice. Regular life, for the most part, is pretty crap, and this is what it talks about.” His words echo the street-sampled poetry John Cooper Clarke emits, Williamson and Clarke railing against their enemies with razor-sharp images. With titles ranging from “Wage Don’t Fit” to “In Quiet Streets.” you wouldn’t be wrong to say the band wasn’t being subtle. You’d just be missing the point.

Bandmate Andrew Fearn has collaborated with Williamson since 2012. Those who watched the pair perform “Jobseeker” on Later..With Jools Holland could see his louche posturing beside the laptop. With their tossed caps and shirts, the men look the part and they had both the beats and words to prove it. Just as The Beatles refused to water down their Liverpool voices, Williamson sings/shouts with proud East Midland poise. Their work is unpretentious, honing in on the everyday struggles of the average record buyer.

Much of their output is excellent. The polemically titled Eton Alive (written, no doubt, in response to the panoply of Public School graduates who eventually become Prime Minister) might be their strongest work. It’s certainly their most wholly satisfying to listen to in one sitting, the punchy loop tapes calling attention to the raging wordplay at hand.

2017’s English Tapas proved a national smash, hitting the enviable #12 position on the UK Albums Charts. The bass-driven “B.H.S” sounded pleasantly similar to the first two Gorillaz albums, while the pounding “I Feel So Wrong” is performed with gut-rendering angst. Released through Rough Trade Records, the album echoed the many who were despondent in their reactions to the 2016 Brexit vote. Recorded in Steve Mackey’s (former Pulp bassist) garage, the album paved the way for the band’s first North American Tour. As a spokesperson in the shadow of Paul Weller, Billy Bragg, and Noel Gallagher, Williamson admitted to The Independent that he’s more of a fighter in song than spirit. “I’ve never been a fighter…I’ve probably had two fights in my life. I stay away from ’em. The fights I have had have left me depressed, causing harm to someone else. The act of it is not to be taken lightly, punching someone, invading someone’s space, it’s not right. It doesn’t stop me from feeling aggressive, though.”

Words in their construct can fill energies. Nobody for one minute believed Lennon was ever willing to give up his possessions, but it was the thought, not the action, that struck people. Lydon’s anarchic energies came from the violence of his performance; he didn’t need to be a violent person. And then there’s Strummer, whose work on “White Man (In Hammersmith Palais)” and “This Is England” seem more chillingly relevant in death than life. British punk needs a new voice. Even if Williamson would rather belt out in voice than fist, he’s the one to fill the space.

1 comment on “Sleaford Mods – The New Voice of British Punk”