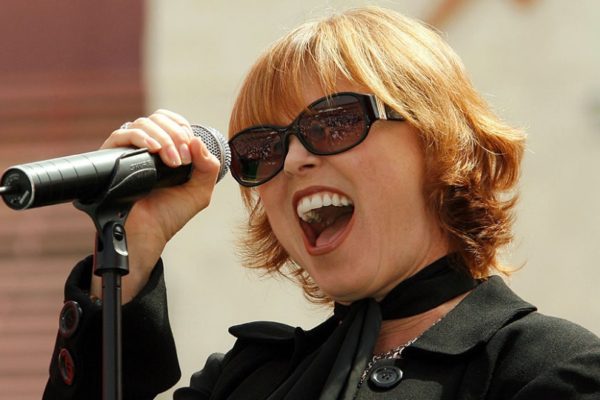 Women are woefully underrepresented in the Rock & Roll Hall of Fame, so it’s no surprise many of you vocally chimed in with your picks after we published our initial list of ”6 Women Currently Snubbed by the Rock & Roll Hall of Fame.” (For the record, that piece generated a lot of support for Sister Rosetta Sharpe and the Shangri-Las especially!) But given how many women have made an impression on our collective ears over the years, you reminded us that there are tons more to consider. Indeed, a few ladies’ names kept popping up in the comments. Here are your top choices.

1. Pat Benatar
The ‘80s rocker was the top pick among readers, and it’s not hard to see why. The four-time Grammy Award-winner has two multi-platinum albums (Crimes of Passion and Precious Time), five platinum albums, and nineteen Top 40 singles! With major hits like “Love Is a Battlefield,” “Hit Me With Your Best Shot,” “We Belong to the Night,” and “Invincible” to her name, she was easily one of the most popular artists of the “totally rad” decade, earning bragging rights as the first female artist to air a music video on MTV. Benatar’s videos remained in heavy rotation throughout the 1980s, cementing her place as the leading female rocker of the era. We may belong to the night, but she belongs in the Rock & Roll Hall of Fame.

2. Carly Simon
Contemporaries Joni Mitchell and Carole King are both already Hall of Famers, so it seems downright absurd Carly Simon has been omitted. One of the defining singer-songwriters of the 1970s, Simon has three gold albums, four platinum albums, and one multi-platinum album (The Best of Carly Simon) as well as four certified gold singles: “You’re So Vain,” “Mockingbird,” “Jesse,” and “Nobody Does It Better (The Spy Who Loved Me).” She’s also the first artist to win a Grammy, Golden Globe and Oscar for a song composed, written, and performed by a single artist for her 1988 hit “Let the River Run” from the film Working Girl. Simon’s easy-going music and confessional lyrics have inspired everyone from Taylor Swift to Tori Amos. That’s more than enough reason to land her in the Hall of Fame.

3. Carol Kaye
Carol Kaye may not be a household name, but her music certainly is. The prolific guitarist and bassist has backed many of your favorite bands over the years. She’s worked with the Beach Boys (“Good Vibrations”), the Righteous Brothers (“You’ve Lost that Lovin’ Feelin’”), Simon & Garfunkel (“Homeward Bound”), Nancy Sinatra (“These Boots Are Made for Walkin’”), and Joe Cocker (“Feelin’ Alright”) among others. Kaye was a go-to for legendary producers like Phil Spector and Quincy Jones, and she often had the distinction of being the sole female studio musician in a room full of guys for many years. Kaye originally started as a jazz guitarist, but a chance meeting with Sam Cooke’s producer in the late ‘50s led to recording sessions with the soul singer and eventually a steady gig as a studio musician, playing on an estimated 10k sessions! Without Kaye, quite a few of rock n’ roll’s biggest hits simply wouldn’t sound the same. It’s time for the Hall of Fame to duly recognize her contributions to so many of the artists who are already members.

4. Suzi Quatro
Though there were plenty of hard-rocking women in the music scene toward the late ‘60s and early ‘70s, bassist and singer Suzi Quatro was something else when she roared on the scene in 1973. Usually clad in a leather jumpsuit, Quatro eschewed traditional femininity in favor of a gregarious masculine aesthetic and performance-style akin to the male rockers she idolized. “I was a new kind of female,” Quatro told The Herald, “they weren’t quite sure what to do or say.” Indeed. As the first female bass player to become a rock star, Quatro hit number one in the U.K. and Australia with singles “Can the Can” (‘73) and “Devil Gate Drive” (‘74) and sold somewhere in the vicinity of 50 million records. While she was never as big of a musical act in the U.S. (a role on Happy Days made her a household name), her influence could be felt on other female rockers like Debbie Harry and Joan Jett. Quatro is already in Michigan’s Rock & Roll Hall of Fame, so it’s time for this barrier-breaker to break through one more and take her rightful place in the Rock & Roll Hall of Fame.

5. Connie Francis
As some of you noted, Connie Francis was not only a top-selling female artist of the ‘50s and ‘60s, she’s estimated to be among the top-selling female artists of all time, challenging only Madonna for the top spot. With at least 200 million records sold, Francis’ impact can’t be denied. Nor can her long list of hits from “Who’s Sorry Now” and “Stupid Cupid” to “My Happiness” and “Everybody’s Somebody’s Fool.” By the end of the ‘60s, she had 35 Top 40 hits to her name. The early prototype for today’s pop stars, Connie Francis easily hopped from genre to genre and was among the first popular singers to record albums in other languages. Despite many personal setbacks and tragedies, Francis has kept on recording and touring around the world. Who’s sorry now? The Hall of Fame should be for not including this major hitmaker among their ranks.