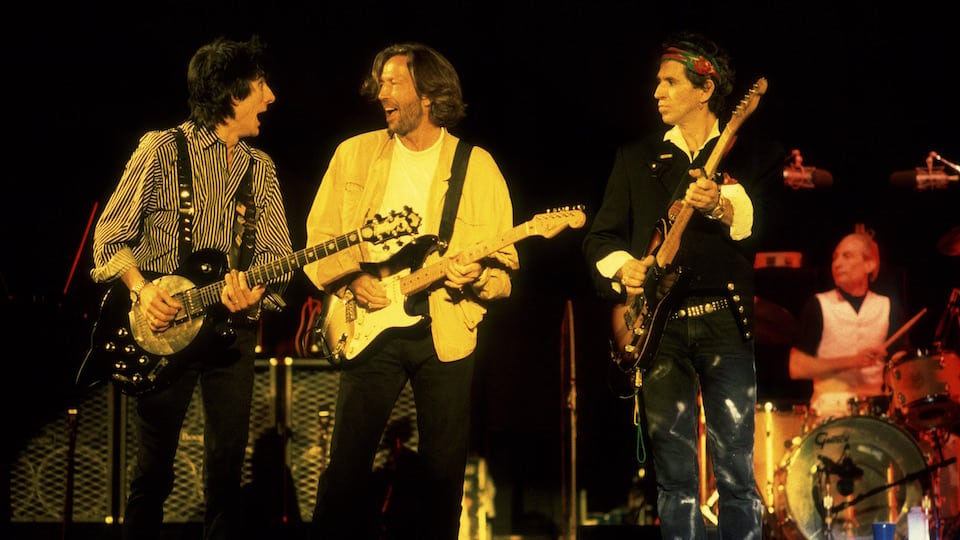 Generally speaking, the Rolling Stones are a pretty self-contained unit. Mick Jagger, Keith Richards, and Charlie Watts all have distinctly recognizable styles, as did former members Brian Jones, Mick Taylor, and Bill Wyman. Even Ronnie Wood, who joined the Stones in 1975, somehow forged his guitar work with that of Richards to form a truly unique sound. But there have been occasions when the Stones have gone outside their fold in search of something distinct. When they do, they have a knack for picking just the right musicians for the job. Here are seven “assists” that took the Rolling Stones to another level, both in the studio and in concert.

How important is Stewart to the Stones legacy? In his 2010 memoir Life, Richards states, “To me, the Rolling Stones is his band. Without his knowledge and organization… we’d be nowhere. ” In fact, “Stu” was an original member of the band in 1962, a top-notch boogie-woogie, rhythm-and-blues keyboardist whom manager Andrew Loog Oldham transitioned into the band’s road manager and sideman, roles he loyally undertook until his death in 1985. In addition to the above songs, he can be heard on “Down the Road A Piece,” “Let It Bleed,” and “Brown Sugar” among many others.

2. John Lennon and Paul McCartney: “We Love You”

On Their Satanic Majesties Request, this 1967 nod to the Summer of Love is a psychedelic trip thanks to lyrics such as “We love you and we hope you love we, too” that still puts hardcore grammarians in quite a tizzy. To his credit, Jagger invited two old pals, John Lennon and Paul McCartney, to add their trademark vocals to the song. In the United Kingdom, “We Love You” was the A-side to “Dandelion” and shot straight up to Number Eight; in the United States, the sides were perhaps foolishly reversed so that stateside, “We Love You” never got any high than Number Fifty, even with the Beatles boost.

The lyrics of “Gimme Shelter,” one of the most powerful rock songs ever, confront the dichotomies of love and hate, violence and peace — with the simmering guitar and drums of the intro effectively setting the right amount of tension. Even so, the band recognized the song needed that extra something so, at the urging of producer Jack Nitzsche, they contacted singer Merry Clayton (in the middle of the night) to come down to add vocals to the track. Listen carefully and you’ll notice her voice cracks the third time she sings “rape, murder, it’s just a shot away.” Then Richards yell out an appreciative “Yeah.” We heartily agree.

It was Cooder who showed Keith Richards how to tune his guitar to a chord, known as open tuning, and while Richards ran with it on such classics as “Honky Tonk Women,” “Brown Sugar,” and “Tumbling Dice,” he still brought Cooder in to play that harrowing slide guitar solo on “Sister Morphine” from Sticky Fingers (1971). That Jagger/Richards tune co-written by Marianne Faithfull isn’t the only Stones project you can hear Cooder on either: He can also be heard on the Jammin’ With Edward! LP, minus Richards.

5. Sonny Rollins: “Waiting on a Friend”

Here’s a unique one in the Stones repertoire. Released in 1981 on Tattoo You, “Waiting on a Friend” reveals a more pensive side of the band, made even deeper by jazz giant Sonny Rollins, a great saxophonist who paid his dues in the early ‘60s by practicing on the Williamsburg Bridge. Although the song’s foundation was originally recorded in 1972, Jagger added lyrics nearly a decade later, then pursued Rollins to overdub a solo. Rollins said yes then asked Mick to “dance out” what he wanted him to play. Not your typical studio collaboration but by God, it worked.

The Rolling Stones live shows are legendary and the 1989 Steel Wheels tour was no exception. A huge undertaking with a massive stage designed by Watts, Jagger and Mark Fisher, Steel Wheels proved to be among the most financially successful tours of its kind. It was also the last tour for bassist Bill Wyman so for the last US shows they brought fellow blues aficionado Eric Clapton onstage for the Howlin’ Wolf number “Little Red Rooster” then included that performance on the resulting live CD Flashpoint. After Clapton takes center stage for a blistering solo, Jagger sings the last verse only to find Clapton starting up another amazing solo, this time with Jagger joining in with some bluesy harmonica.

7. Solomon Burke: “Everybody Needs Somebody to Love”

Wilson Pickett recorded it in 1967; The Blues Brothers, in 1980. But the original dates back to Solomon Burke in 1964 then was quickly covered by the Stones the year after. Never ones to steal someone else’s thunder, The Stones had Burke on board as the opening act for several shows in 2003 and a new version of this soul classic, in which Burke and Jagger traded off the vocals, was included on the Live Licks LP. On the DVD box set Four Flicks, you can see Burke bestowing one of his bejeweled capes on the much-smaller Jagger who goes on to say he almost fell over due to its weight.

6 comments on “The Rolling Stones and 7 Stellar “Assists””