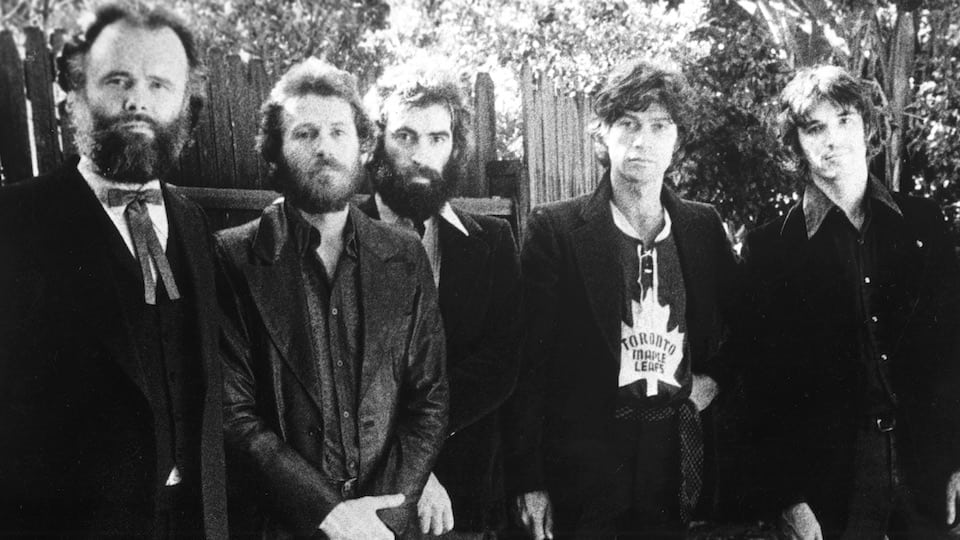 When they were clicking, they created a magic that was unlike anything else on the rock and pop scene, music that captivated not only fans but other musicians. (Bob Dylan, George Harrison, and Eric Clapton were among those who worshipped at their altar.) They didn’t even need a fancy name; they were just The Band; that’s all you needed to know. This was a collective that didn’t traffic in hit singles, yet still managed to record many songs that are part of the firmament of American music, even as four of the five members were Canadian. But one quick listen to The Band’s sadly-too-small catalog will unearth any number of hidden gems.

Some songs reveal quite a bit more about the composer than any intended subject. Such is the case of this woozy ballad from The Band’s 1968 debut Music From Big Pink. Ostensibly, it’s a tale about a girl who just can’t seem to be reached no matter how many people try. But Richard Manuel, who wrote the song as well as delivering the aching lead vocal, sounds as if he knew that lonely feeling all too well. Manuel didn’t seem to have too much confidence in his songwriting gifts, which is too bad, because his originals were, for the most part, idiosyncratically haunting.

There’s not an ounce of filler on The Band’s eponymous 1969 album (often referred to as The Brown Album). And several of the songs — “The Night They Drove Old Dixie Down,” “Up On Cripple Creek,” “Rag Mama Rag” — are among their most popular. This bittersweet and relatively obscure chanty about two old sea dogs looking to return home to live out their final days will have you smiling through your tears. It’s a heartfelt Robbie Robertson composition cradled tenderly by Manuel’s vocal, the harmonies of Levon Helm and Rick Danko, and Garth Hudson’s accordion.

Stage Fright is The Band’s most underrated album, a bit colder and tenser than the records that had come before but perhaps more clear-eyed about the modern world’s pitfalls. On this closing track, Manuel and Helm trade off vocals and sound suitably pained about the insidiousness of gossip. Robertson delivers a brief guitar solo that’s as close as The Band ever got to Beatlesque, while Helm’s drums thump with ill portent.

Although it contained several high points, Cahoots is the first letdown in The Band’s catalog. Robertson’s story songs seemed strained at times, and the music as a whole was somewhat pedestrian. This beauty is definitely one of the best moments on the album. It’s a warm, gospel-tinged tune that is, unsurprisingly, sung to the hilt by Helm. It wouldn’t have sounded out of place on The Brown Album, which is high praise indeed.

Moondog Matinee is one of the finest cover albums in rock history, and it seemed at the time to be a way for the five men to recharge their creative batteries for another run of brilliance. Oddly enough, when they did get back to original material in a few years, they were already staring down the end of their run together. In any case, the performance here by Manuel is soulful perfection, further proof of his interpretive brilliance.

When The Band returned with Northern Lights – Southern Cross, Robertson regained his songwriting touch on several epics, while Rick Danko put the definitive stamp on unrequited love with his towering performance on “It Makes No Difference.” This track is more of a quiet wonder, set apart by excellent acoustic guitar work from Robertson. It’s a moving tale of people generally overlooked by society, here given a sensitive and dignified portrayal thanks to Robertson’s words and Manuel’s empathetic vocals.

The Band, at least in the studio, went out with a whimper on Islands. It was recorded to fill out their contract and was largely a secondary concern compared to preparations for their historic final concert, immortalized as The Last Waltz. Nonetheless, they managed to pull it together for a charming Christmas song, which retells the birth of Christ in an understated fashion and gets a boost from Danko’s sweet lead vocal and Helm’s intuitively funky drumming.

Robertson’s departure after The Last Waltz and Manuel’s death in 1986 left The Band a trio, but they soldiered on with some new musicians and plenty of special guests on Jericho. It’s a fine comeback if dogged by a handful of songs that never would have made the cut in the glory days (a problem that befell each of their last three albums). But they rise to the occasion for three standouts: the haunting title track, their expert reimagining of Bruce Springsteen’s “Atlantic City,” and this lovely tribute to Manuel, sung by Danko with the kind of emotion only a true friend could muster.

The guests kept coming on High on the Hog, although the core trio was never far from center stage. But the album’s highlight comes in this live recording featuring Manuel, recorded just a few months before his death. Even though he doesn’t hit the high notes like he once did, he wrings every last bit of desperate emotion from this love song written by two members of Bread. His soulful piano work, often overlooked but a key component of The Band’s formula, gets a spotlight here as well.

Jubilation was The Band’s last recorded hurrah; the subsequent deaths of Danko and Helm effectively ended their story. But they were able to reach back for one more piece of magic on that 1998 album, with a big assist from songwriter Paul Jost, who managed to capture the themes of family and tradition that The Band had long espoused. Danko slips into the lyrics like a comfy sweater, and Hudson coaxes pure wonder out of his accordion. Those who checked out when Robertson left will be sorry they missed this beauty.