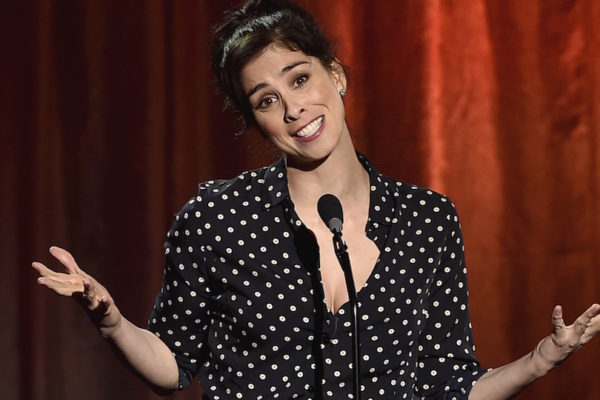 Regardless of your political persuasion, you can’t deny that our nation is currently experiencing some significant growing pains. Hundreds of news stories hit our brains each day about extreme beliefs colliding with each other, on every conceivable issue: race, religion, gender and identity politics, jobs and economics, and so on. To understand this period in which the soul of America is so divided against itself, future generations will look to the significant works of our cultural icons: musicians, filmmakers, authors, and especially comedians. Comedy, by necessity, has to have some extra bite to survive turbulent times like these. If you’re still asking your audience what the deal is with airline peanuts, you’re obsolete.

With her Hulu series I Love You America, Sarah Silverman has completely reinvented herself and her comedic voice. The show also expands the boundaries of the “TV talk show” format: there are familiar components like a monologue, guest interviews, pre-taped segments and live scripted bits, but they are all [amazon template=right aligned image&asin=B078TQJRRV]like nothing we’ve ever seen before. The tone of the show swings back and forth from silly and surreal to deadly serious, and back again. Her comic chops are as strong as ever, but she’s also unafraid to go straight to the soft underbelly of the hard issues as she adheres to the belief that “if it’s mentionable, it’s manageable.”

It would have been easy for Silverman to make a show that simply preaches to the choir, and it’s abundantly clear which “side” she’s “on.” But her heart is in the right place as she thoughtfully reaches outside of her self-admitted “liberal elite bubble” to truly understand and connect with those who live and think differently than she does. The results are often hilarious, sometimes poignant, and always astounding. Silverman masterfully follows the comic objective laid out by George Carlin: Find the line, deliberately cross it, take the audience with you, and have them glad that you did.

She travels to Mineola, Texas, a town of 87% Trump voters, and winds up bonding with the locals over shared embarrassing bathroom incidents. She interviews a former Nazi who rationally and methodically explains their recruiting strategies. She addresses the “War on Christmas” by sincerely asking the “War on Christmas” types what problem that they think Jews might actually have with Christmas, before rattling off a laundry list of Christmas songs written by Jews. (She even improvises a Christmas song of her own, and to this goyim’s ears, it wasn’t half bad!) She never makes her “opponents” look bad, choosing instead to highlight their shared humanity and find a “third way” for polar opposites to relate to one another.

If you’re already a Sarah Silverman fan you’ll definitely enjoy I Love You America. But even if you’re not, there’s a good chance that you’ll find something thought-provoking and compelling in every episode. The show misses the mark occasionally, but that’s okay: I Love You America is revolutionary because Silverman is using her platform for a noble purpose. She seeks to dial down the rhetoric, the hatred, the “Me vs. You”, “Us vs. Them” sensibility that has recently infiltrated society and the body politic. Her genuine attempt to make the world a better place is the mark of successful art in any age.

PS. Three other ways to get some comic relief...and have a look at these classic MadTV sketches.