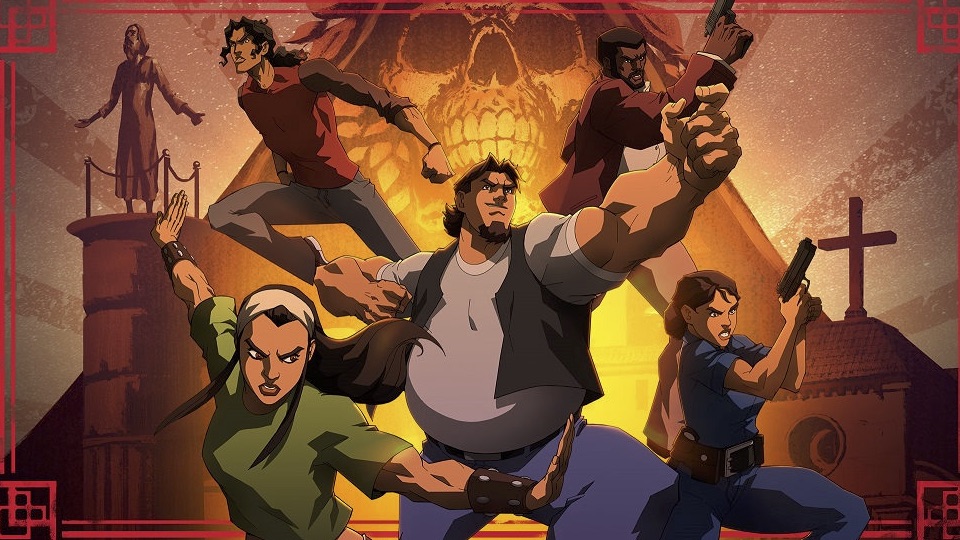 Seis Manos, the new anime series from Netflix and Viz Media, is an offbeat blend of kung fu movies, Mexican wrestling flicks and blaxploitation films, all topped off with a dash of the supernatural. Set in the 1970s, the show is the story of three orphans living in San Simon, a small Mexican town. Chiu, their guardian and mentor, is training them in martial arts. When Chiu is killed during an attack by powerful, demonic (yet partly human) beings, the trio crosses paths with El Balde, a brutal drug lord. El Balde has been using dark magic to give both himself and his men supernatural powers. He plans to corner the drug trade in the area, and also take over the town.

The orphaned trio team up with a young policewoman and a DEA agent to take down the evil drug kingpin, but it won’t be an easy task. It turns out their revered mentor had been keeping some secrets from them. Chiu may not have been as righteous and peaceful a man as they originally thought. Our heroes must also deal with their own fears, which are fueled by the ghosts of their troubled pasts. They will need all of their strength to deal with the dark, mystical forces that have been called upon by El Balde. Secrets will be revealed, lives will be lost and conspiracies unearthed. This unlikely team of heroes will need to conquer their personal demons in order to triumph.

The series is visually striking, and the design by Powerhouse Animation (who also produced Castlevania) is appropriately old school. The show has an intentionally grainy, washed-out look reminiscent of 1970s genre films. That’s not to say there isn’t a dazzling color palette on display as well, but the behind the scenes team has clearly been influenced by the 1970s. The frequent fight sequences are dynamic and well-choreographed. The voice cast is excellent, featuring veteran movie tough guy Danny (aka Machete) Trejo as El Balde, and Mike (Luke Cage) Colter as DEA agent Brister, channeling the influences of several 1970s blaxploitation heroes. They’re having a grand time, and the talented cast also includes Jonny Cruz and Angelica Vale.

The flavorful and expressive score for the series is by Carl Thiel. The music feels like the backdrop for a big-screen movie. It adds yet another element of authenticity to the show’s vibe. Seis Manos was created by Brad Graeber and Alvaro Rodriguez, and all eight episodes of the season were directed by Willis Bulliner. The series is kinetic, often compelling, and full of action-filled set pieces. There are healthy doses of humor to offset the darker moments, but be aware the violence in the show is of the distinctly R-rated variety. This is an anime series that is squarely aimed at an adult audience. Seis Manos is an eclectic blend of genres, If you’re craving some martial arts action mashed up with a Tarantino-esque grindhouse aesthetic and some horror film elements, it’s worth a look.