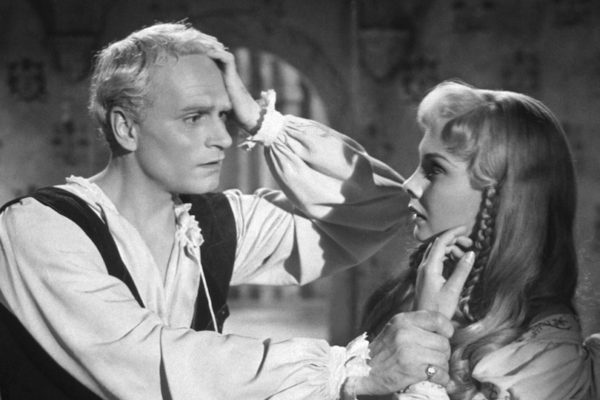 Had William Shakespeare been alive this past century, he might have spent a goodly portion of his days attending red carpet events for movie adaptations of his many plays. (After all, he’s got over 1000 credits at IMDb.) So how do we sift through his gargantuan filmography? Turn to the Brits, of course. What follows are the “best of the best,” according to BAFTA — the U.K. equivalent of the Oscars. Given that he’s their playwright, we figured we’d let them make the picks. Here are seven that merited consideration for British film’s highest honors.

1. Romeo + Juliet (1996)
This adaptation of R&J comes courtesy of Baz Lurhmann. Retaining Shakespeare’s verse but contemporizing the action to modern-day mafia families, Luhrmann puts his stamp on the Bard in true auteur fashion. The lovers — played with charismatic authenticity — may not have snagged Leonardo DiCaprio or Claire Danes BAFTA recognition but this retelling of the classic tale, guns [amazon template=right aligned image&asin=B078TQJRRV]blazing, did get BAFTAs for Adapted Screenplay, Director, Original Music, and Production Design as well as nominations for Cinematography, Editing, and Sound. In short, BAFTA liked this Romeo & Juliet a lot.

2. Richard III (1995)
Set in a war-torn 1930s, this Richard reimagines its hunchback title character as an aspiring usurper eager to seize the throne from his brother and become a fascist dictator. Ian McKellen elegantly reprises a role he’d previously played onstage at the Royal National Theatre. Nazi visuals, British history, and an offbeat use of U.K. landmarks give a period feel to this tale of unadulterated evil. The approach also earned McKellen two nominations — one as Actor, the other for Screen Adaptation. And while it didn’t win the “Alexander Korda Award “for Best British Film, it did take home trophies for Costume and Production Design.

3. Henry V (1989)
Released to breathless acclaim by then-first-time director Kenneth Branagh, this version of Henry V has a lot more grit, grime and earthiness than Laurence Olivier’s more stylized 1944 rendition and proved a tremendous hit with the masses. The stellar cast — including Paul Scofield, Ian Holm, Emma Thompson, Dame Judi Dench, and Christian Bale (in one of his earliest roles) — all merit praise but it was Branagh who took home the gold for Best Director. (The film was also nominated for Actor, Costume Design, Cinematography, Production Design, and Sound.)

4. Romeo and Juliet (1968)
Director Franco Zeffirelli received a lot of love and respect for his beautifully rendered, poignantly presented tale of the Bard’s most famous star-crossed lovers. His primary cast of two unknowns as Romeo (Leonard Whiting) and Juliet (Olivia Hussey) were not only age-appropriate but absolutely gorgeous. They also approached the material with a freshness and skill that has secured this adaptation a timeless quality. A winner of Best Costumes, the film also was nominated for Art Direction, Directing, Editing, Music, Supporting Actor and Supporting Actress.

5. Taming of the Shrew (1967)
Here’s a rollicking, slapstick-y romp about the messy courtship between two willful people. But are we talking about the characters (Kate and Petruchio) or the actors (Elizabeth Taylor and Richard Burton)? Gorgeously shot by Zeffirelli, Taming of the Shrew allowed Taylor and Burton — easily one of the most volatile and newsworthy couples in showbiz history — to unleash their own brand of unbridled sexuality and bawdy humor. Nowadays, it’s great fun to view for its camp quality. Plus, it’s easy to see why Taylor and Burton garnered nominations as actors. They’re captivating with a chemistry that can’t be beat.

6. Richard III (1955)
The iconic Sir Laurence Olivier helmed and starred in this rendition that drew acclaim at the time of its release and subsequently reached a greater audience with an American re-release about a decade later. There’s a reason they brought it back: Olivier is stellar as the tragic anti-hero as is Sir Cedric Hardwicke as Edward and its all-British cast. Take note: The production was carefully researched for accurate period detail and has become an exemplar in the canon. It won a BAFTA for Best British Film and Best British Actor. Congrats, Sir Laurence!

7. Julius Caesar (1953)
Joseph L. Mankiewicz is most remembered today as the writer of All About Eve but he also helmed this version of Julius Caesar, done in an elegant black-and-white, back-lot style. The actors are superb, from James Mason and John Gielgud to Deborah Kerr and Greer Garson. And how about Marlon Brando as Mark Antony? Well, he’s a revelation, utilizing his famous Method acting in a way that upstages most — if not all — of his costars. Need proof? Both Gielgud and Brando secured Best British and Foreign Actor Award won BAFTAs. (Yes, there’s a Best Foreign Actor category.)

8. Hamlet (1948)
King Lear, Shylock, Richard III, Henry V… Laurence Olivier solidified a large part of his rep on Shakespearean roles but his turn here as the doomed Danish prince of the title certainly ranks among his finest performances. The movie earned Olivier an award for Best Film From Any Source, although not the one for Best Film (for which it was also nominated). Other BAFTA-nominated Hamlets — the Kenneth Branagh one in 1996; the Mel Gibson one in 1990 — may have their charms but this one set the standard.