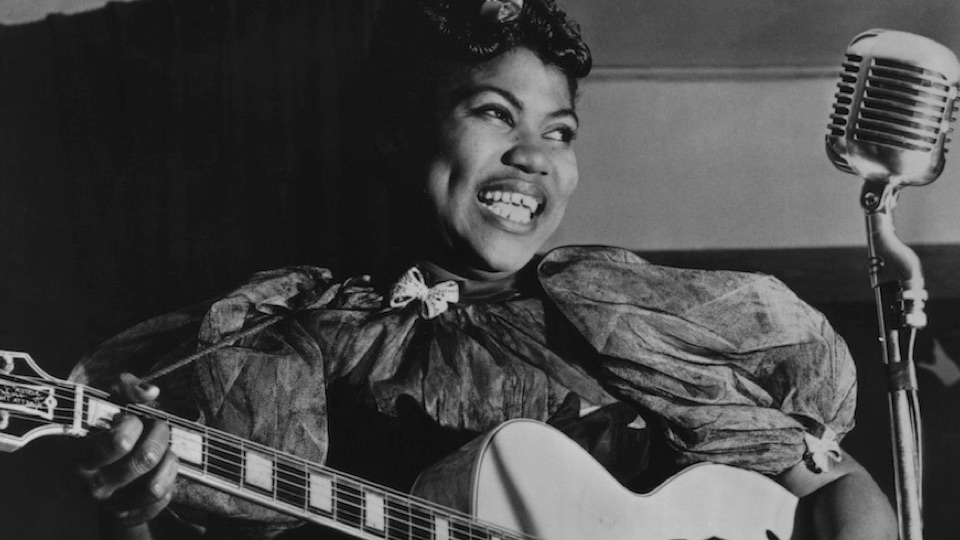 Sister Rosetta Tharpe has received her share of accolades in the 21st century with a tribute album and book, both titled Shout, Sister, Shout and a documentary called The Godmother of Rock and Roll. In 2018, she was inducted into the Rock and Roll Hall of Fame. And for good reason: her live performances were commanding, whether she was playing churches, jazz clubs, or concert halls throughout the world. She had a majestic stage presence, statuesque with her guitar strapped over our shoulder, engaging the audience in a one-on-one relationship with her boundless charisma. So why did it take more than a generation for her to be recognized for her influence, especially in the rock and roll world?

Sister Tharpe was born on March 20, 1915. Her mother, Katie, was also a singer and Rosetta began performing with her at age four. When she was six, they moved to Chicago and began singing with the Church of God in Christ, in the Bronzeville neighborhood. It was there that Rosetta began to be recognized for both her talents as a singer and an accomplished guitarist.

Related: “Warm Up to The Ice Queen, Sue Foley”

Katie and Rosetta traveled the gospel circuit throughout the 1920s establishing themselves as powerful performers in the Pentecostal community. In 1934 she married a preacher named Thomas Thorpe. They lived in Miami and she sang regularly in the Miami Temple. Though they were well received, the marriage faltered and while they did not officially divorce until 1943, their separation began as early as 1937.

In 1938, Sister Rosetta and her mother moved to New York City, replacing the “o” in Thorpe with an “a” creating the Tharpe name that she used for the rest of her life. In NYC she began a successful run of mixing gospel with secular music in jazz clubs including the Cotton Club performing with swing bandleader Lucky Millinder. She had a hit with “Tall Skinny Papa” a song not as raunchy as some blues songs of the era, yet this secular music still upset some of her gospel fans. In The Godmother of Rock and Roll, friend and songwriter Roxy Moore said that Tharpe told her that she was bound by contract to sing the secular songs.

Beginning in the mid-1940s, Tharpe made some pivotal career moves. With her marriage to Thorpe legally ended up in 1943, she also left the Millinder band and returned to an exclusively gospel career. She recorded a song in 1944 that was a major milestone: with a stripped-down band led by pianist Sammy Price, “Strange Things Happening Every Day” is a template for rock and roll with its topical lyrics foreshadowing the folk-rock era by 20 years. And, Tharpe’s stressing of the last word of some of her lines can be heard in admirer Bob Dylan’s singing.

Related: “The 10 Best Bob Dylan Songs You May Have Never Heard”

Several years later, Tharpe joined forces with singer Marie Knight, performing to sold-out gospel crowds across the country. Knight matched Tharpe’s charisma and vocal ability, providing a legendary following among gospel fans, with songs like “Up Above My Head” and “Didn’t It Rain.” The legendary partnership ended tragically after Knight’s two children and her mother died in a fire in 1948 while the duo was on tour.

Sister Rosetta toured with the vocal group the Jordanaires in the late forties and early fifties, one of the first multiracial gospel pairings. The Jordanaires went on to sing backup for Elvis Presley, who especially liked Tharpe’s guitar playing.  Johnny Cash, Jerry Lee Lewis, and Carl Perkins were also fans.

When British musicians were beginning to discover Afro-American artists, an opportunity for Tharpe to tour England presented itself. She played with bandleader Chris Barber in 1957 who provided Dixieland-style arrangements to some of her most famous songs. British audiences embraced her and she continued to tour England and other parts of Europe until 1970 (Keith Richards, Jeff Beck, and Eric Clapton have all cited her UK appearances as a huge influence on them). In an especially charming performance from 1964, she plays to an enthusiastic crowd at a railway station in Manchester. There is also a moving video from Copenhagen in 1970 of her singing “Precious Lord” in what is thought to be her last recorded performance.

Tharpe’s health began to falter in her later years as she had developed diabetes. Also, the death of her mother in 1968, a constant in her life, greatly affected her. She moved to Philadelphia with her third husband and manager Russell Morrison, where she stayed until her death in 1973.
Though it has taken many years for her music to be given its due, she is now considered one of the most talented and influential female artists of the past century. It would be easy to look on this posthumous recognition cynically but in keeping with her upbeat demeanor, Sister Rosetta would have instead been overjoyed by it!