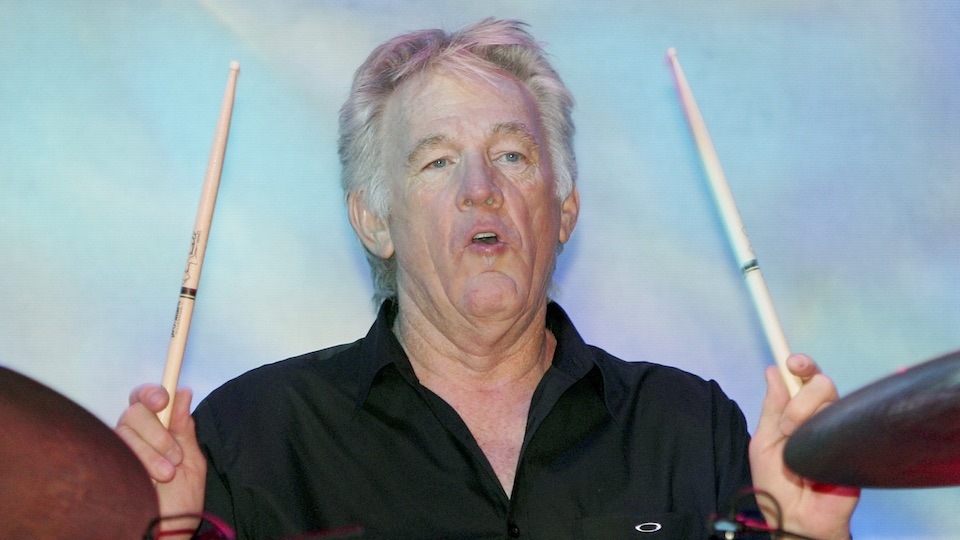 Following a lukewarm reception to their debut, Paul and Linda McCartney traveled to New York to work on the exquisite follow up album, Ram. Denny Seiwell, a jazz player turned sessioneer, played with flair and swing, earning him a rightful place in Wings in 1971. Seiwell’s tenure included the political call “Give Ireland Back To The Irish”, the Oscar-nominated “Live and Let Die” and the first two Wings albums. Comprising an American drummer, a Northern Irish guitarist, a Birmingham singer/songwriter and a photographer turned keyboardist, Wings “Mark I” seemed to exemplify the international facets of McCartney’s music. Currently, Seiwell has his own band, which he is here to discuss, as well as his most famous group.

CS: Ram, a record of the idiosyncratic proclivities of McCartney befitting the latter-day Beatles, is a sensational album. How did you react to the initial demos?

DS: Demos? [chuckles] We didn’t actually hear demos. How it worked was, we’d go to the studio and Paul would play us a song he’d just wrote. He’d play guitar or piano, whatever he’d written the song on. We worked very hard together, we’d often have a track in a day, just the three of us at a time. Paul, who is the master of overdubs, would overdub a bass part to my drum licks at times. He took inspiration from some of my parts for his bass overdubs. I never saw him play bass, I never heard him play a note until I heard the record. So, we’d make our parts, the three of us. Sometimes we’d have it in a few hours, and then Paul would let us go. That’s what happens when you hire pros [laughs].

CS: Echoing from guitar to guitar, track to track, McCartney clearly ached for a band. Where did he come up with the idea for Wings?

DS: There were three of us on Ram along with Paul. Me on drums, and Dave and Hugh on guitars. Dave Spinozza was the first one, he played at the beginning, he was such a busy guy, he’d often go out for other sessions, which Paul wasn’t too happy about, so he asked me for a recommendation. I said, Hugh McCracken. So, we worked together on the album. One day, in Scotland, Paul called us to his farm. He asked us to join a band, I said “Sure.” Hugh said he’d think about it, went back to his hotel in Scotland, and the next day said, “No thanks.” It was a mystery for many years and we didn’t know why he did it. I eventually found out. Hughie had two kids from a prior marriage and he just couldn’t bear leaving them for such a long time. I eventually relayed this information to Paul, which made it much easier for him to accept Hugh’s decision. It wasn’t easy at the beginning, the British Government didn’t want me to play! They thought it should be a British drummer. Paul and his team of barristers had to say “I get to choose who plays drums.” It took a long time before I got a work permit!

CS: Wild Life followed a habit of recording tracks as promptly as possible. Was that the philosophy of the album?

DS: I’m not sure if we were playing live, just a new way of showing a band that wasn’t a clean, polished record. Different to a Beatles album or even, say, how Ram was. We weren’t even a proper band then, it was just the four of us. Paul, Linda and the two Denny’s. I think some of them came out better in concert. Amazing, recently, to watch the twenty live tracks from Europe, it helped me to realize what Wings were about. Wild Life was before Henry joined the band. I loved Henry, my favorite guitarist in the world. He’s my brother and I miss him [McCullough passed away in 2016]. A lot of people think the first line up with me and Henry is their favorite.

CS: Guitarist Henry McCullough performed on one of Wings’ earliest triumphs. Give Ireland Back To The Irish, an unexpurgated call to the events of Bloody Sunday. Did the entire band feel strongly about the sentiment?

DS: Oh, definitely. One of the great moments. Paul summoned us together, we were all talking about Bloody Sunday. I was the odd one out, I didn’t grow up around all this, but I agreed with it. Paul felt very strongly about it, he’s not normally a political guy, but he told us “I got to say something”. He told us about a song he was writing, we had our instruments in the living room and we figured out how to play it and recorded it. ABC News sent a news team over, they captured some of the rehearsals which you can find online in various formats.

CS: “Get On The Right Thing,” a delightful blues track, showcased the fluting grooves Wings boasted. What was it like to play off McCartney as a bassist?

DS: That song is from the Ram period, Hugh and I didn’t see him play bass. But when I played with Paul live, I can say he was the greatest bass player I ever played with- and I’ve played with all the greats [laughs]. Great notes, great intuition, great overdubs. A genius. There’s some great concert footage of the Bruce McMouse film. That was great fun to make, us playing against supposed cartoon mice. I didn’t know what to do, I’m not an actor. I never saw it until the new set. I had a part in that, sent some memories and some film, and I finally saw the film. It brought back some really great memories of the time in the band.

CS: The glam rocker “Live and Let Die,” is a towering colossus of pyrotechnics and one of the best James Bond themes. How did you reinvent it on your album?

DS: I was a jazz drummer, but when you session with a Beatle, you can kiss your jazz career goodbye (laughs). I’m doing jazz with the Denny Seiwell trio. When we did our first album, Reckless Ambition, five of the songs were credited to McCartney. I’m best known for my association to Paul, so the guitarist, John Chiodini, said: “why don’t we do some of those songs?” So we did them in the jazz tradition. On this album [Boomerang], it seemed a no-brainer to do “Live and Let Die,” the song I’m best known for. It lends itself nicely to jazz. It’s a great Bond song, I remember watching “Nation’s Favourite Bond Song” thinking we’d win. We came second to Adele! I remember going to the premiere, it was like royalty. Gregory Peck was there, and some of the royal family, so I’m told. It’s a great Bond movie.

CS: Red Rose Speedway transitioned from double album to single work. How did that transition manifest itself?

DS: That was EMI’s decision. I think they might have thought we were too new a band for a double album. Paul called us and told us of EMI’s decision, so we thought let’s make a single album and sequence it as well as we can. The other stuff we can release at another time. I remember recording “Mama’s Little Girl” in Olympic Studios with Glyn Johns. There were African drums. There’s a lot of great material from that period.

CS: Would you care to tell us about your current projects?

DS: I’m just really excited about my new album. It’s selling so well in Europe and the UK. It’s a shame, Americans can be blasé about jazz, it’s one of the few really American styles of music. A lot of great black jazz artists had to go to Europe, places like Zurich and Paris, to get appreciated in the fifties. It might be my favorite album I’ve ever played on. I’ve played on two hundred albums as a session drummer, and now I’m playing something a little closer to my heart. It means more to me. I guess I’m being a bit selfish [chortles]. It’s an accessible album, things people can sing along to. We’re on Quarto Valley Records with Bruce Quarto. We’re the first jazz act who signed. They’ve got Paul Rodgers, Edgar Winter and Pete Brown who used to write with the rock band Cream. I got my first contract as a solo artist at seventy-five years old. So never stop on your dream!