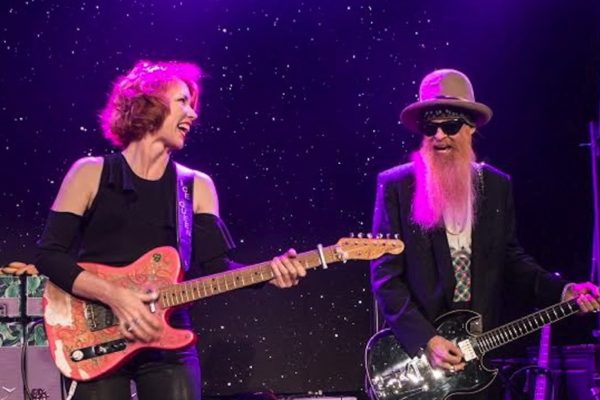 Earlier this year, Guitar Player Magazine compiled a list of “50 Sensational Female Guitarists.” Although the women featured in the article were surely honored to make the cut, having to continually bang on the door of a male-dominated club must get old. Blues guitarist Sue Foley knows all about playing with the big boys, and she’s not intimidated. When Albert Collins teaches you how to play dice in the back of Austin’s own Antone’s nightclub, it’s the same as getting a key to the front door. Foley’s new release, The Ice Queen, is both a nod to Albert “The Iceman” Collins and a celebrated return to her Texas beginnings.

Foley’s discography started with four stellar releases on Clifford Antone’s own record label, including her 1992 debut Young Girl Blues. The Ice Queen was recorded and mixed in Texas. It features a “who’s who” of Austin musicians and was produced by Hammond B3 master, Mike Flanigin. Foley calls the record, “…the best of my career.” How can that happen when you haven’t made a new album in a decade? First, you better be a badass guitar player. Second, you call a few old friends.

Foley’s guitar playing is unique, especially considering the genre. Instead of using a traditional flat pick, she opts for a thumb pick to compliment her three finger playing style. It’s an advantage she makes the most of and it adds to her versatility. Throw in vocals that are a little Bonnie Raitt with a dash of Lucinda Williams, plus songwriting prowess, and you have what baseball scouts call a “multi-tool talent.” Those talents race out of the gate on the album’s opening track, “Come to Me.” The song’s smooth feel is complemented by the Bowie-esque background vocals of Charlie Sexton, who currently tours with Bob Dylan. But, The Ice Queen is just getting started.

Charlie Sexton’s vocals are just the beginning of the talent pool that Foley has splashing around on the album. The record features duets with two legendary Texas axemen: ”Fool’s Gold” highlights Billy Gibbons’ (ZZ Top) ability to add just the right kind of “nasty” to the vocals, while Jimmie Vaughan’s (Fabulous Thunderbirds) signature guitar style is stamped all over “The Lucky Ones.” Other tracks include the talents of drummer Chris Layton (Stevie Ray Vaughan & Double Trouble), Derek O’Brien (guitar), producer Mike Flanigin on the Hammond B3, and The Texas Horns.

Sue Foley took nearly two years to hammer out every detail of The Ice Queen. It’s a comeback well-planned and well-executed in every respect. But here’s the thing, there’s something on the record for music fans beyond the blues. “The Dance” highlights Foley’s flair for all things Flamenco. “Come to Me” is a tad rock n’ roll. And while The Ice Queen remains true to the blues, you’ll get both contemporary blues and a couple old-school blues covers as well. Eclectic in just the right way.

Foley takes her support for the record on the road this summer, both on the nightclub and festival circuit in North America and abroad. If you can make a show, be sure to get up close and watch her fingers burn the strings on her signature pink paisley Telecaster. You may have to squint: it’ll be a blur.