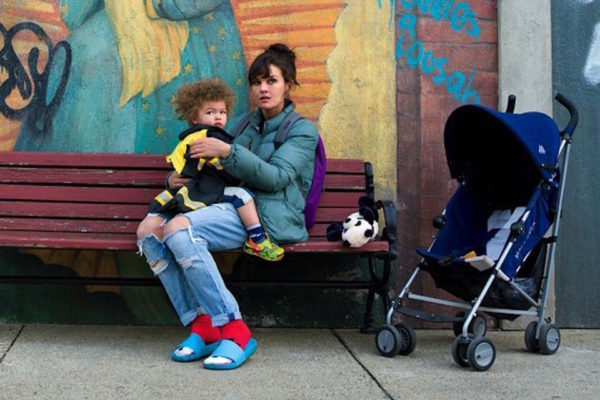 SMILF just completed its jaw-droppingly funny first season on Showtime. The brainchild of Frankie Shaw, whose short of the same name snagged a Grand Jury Award at the Sundance Film Festival, this bold, brash series offers a frank look at a young-ish single mother dealing with myriad issues, like mental health, food, class, religion and sexuality, all while raising a young boy. Take note: with its heavy dose of raunch and raucousness, this show is not for the faint of heart.  But throughout, Shaw (who also plays the title character) balances plenty of laughs against any resulting discomfort. It’s been a long time since being uncomfortable has been this enjoyable. Yet what truly [amazon template=right aligned image&asin=B078TQJRRV ]distinguishes SMILF from the pack is how the show regularly deploys fantasy sequences. These alone make SMILF a must-see and are why we’ve rounded up our five favorite episodes.

Short on Confidence
In the sixth episode (“Chocolate Pudding & a Cooler of Gatorade”) Bridgette hopes to finally make it to the big leagues as a member of the Boston Spirits, the new WNBA expansion team. But first, she has to make it through the tryouts. As soon as she signs in, the lights go down and she’s surrounded by tall women dribbling the ball in a well-choreographed and rhythmically pleasing sequence. Although this nightmare is clearly in her head, it’s a moment that signals that Bridget needs to get over being intimidated by the competition that lies ahead.

Queen of Denial
In the third episode (“Half a Sheet Cake & a Blue-Raspberry Slushie”), Bridgette visits a local temp agency where she mistakenly hears the recruiter say she should pursue a career in prostitution because she can “make her own hours, the pay is great and it’s recession proof.” Far from being outraged, Bridgette runs with the idea, picturing herself as b-ball’s answer to Cleopatra, before reality returns and the recruiter gives her the number to a collection agency which just might have a job for her.

Shocking Superhero
Episode 4 (“Deep Dish Pizza & a Shot of Holy Water”) finds Bridgette pissed off by a sexist guy handing out flyers – to men only – for a big race over the obstacle course. Funny moments ensue in which Bridgette stuffs her crotch with random items to create a bulge and thereby boost her confidence. The fantasy hits a high point when, near the end of the race, she imagines turning into Wonder Woman as she enters a pit full of live electrical wires designed to electrocute participants.

Full-On Fantasy
An entire episode that’s a fantasy? That’s pretty much the case with “Run, Bridgette, Run or Forty-eight Burnt Cupcakes & Graveyard Rum.” It’s Father’s Day and Bridgette is upset with her baby-daddy Rafi (Miguel Gomez) because he’s had their son baptized against her wishes, albeit with the blessings of her mother (Rosie O’Donnell). Throughout the episode, Bridgette frantically searches for her son’s panda, prompted by anything from an old pizza crust to a bottle of pills. Indebted in the best way possible to the indie film Run, Lola, Run, most sequences in this extended fantasy end with someone getting violently run over by a hearse.  Yet it’s hardly a study in morbid mayhem, as the comedy also draws on trippy, drug-induced hallucinations and Spanish-language telenovelas.

PS. Debbie Harry of Blondie is another bad-ass, as are the Gorgeous Ladies of Wrestling (GLOW).

0 comments on “Sundance Short “SMILF” Makes for a Fantastic Series”