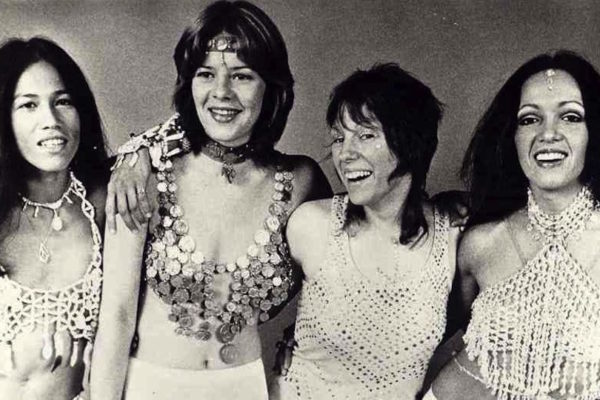 I know what you’re thinking: a group of female musicians named after a slang term for “derrière”? Can’t wait to hear about this. But queue up the opening song from their self-titled debut album (a cover of Marvin Gaye’s “Ain’t That Peculiar”) and you’ll quickly find this isn’t some coyly-named novelty band: Fanny is the real deal! Like many successful rock-and-roll groups, this groundbreaking all-girl outfit initially started when sisters Jean and June Millington formed The Svelts with friends Addie Lee on guitar and Brie Brandt on drums. The original lineup didn’t quite click:  Brandt became a session vocalist for Jimmy Buffet, the Pointer Sisters, and others, while her replacement, Alice de Buhr, splintered off with Lee to form Wild Honey, a group focused on Motown covers.

Eventually, the Millington sisters joined this new incarnation and the group relocated to Los Angeles in 1969. They agreed they were either going to sign a major contract or go back to school in Northern California. After playing any and every locale that would have them, Wild Honey decided to do one last show at an open mic night at the famous Troubadour. That’s when Fate intervened. An assistant to record producer Richard Perry witnessed this “final” show and gave her boss, who was looking for an all-girl rock band, a heads up. Perry convinced Warner Brothers to sign Wild Honey — who at the last minute changed their name to “Fanny,” which they felt better invoked the “female spirit.”

Their first album Fanny (1970) was released to very good reviews. Solid guitar licks backed by groovy drumming and a Hammond organ (courtesy of Nickey Barclay who was also gigging with Joe Cocker) showed a band more than capable of rocking out on original tunes like “Conversation with a Cop” and “Candlelighter Man.” Plus, the group excelled at covering classics like Cream’s “Badge.” This first LP was quickly followed by Charity Ball (1971), an even stronger compilation whose title song made the Top 40. Bursting with creativity, Fanny released the surprisingly hard rock Fanny Hill in 1972, an album that boasts The Beatles’ Geoff Emerick as its engineer. From its Steven Tyler-sounding vocals to a guitar solo worthy of Jimmy Page, “Blind Alley” is a song showing these women maturing as musicians.

They were also incredibly prolific. In 1973, Fanny released Mother’s Pride (produced by Todd Rundgren) which expanded their repertoire via songs like the Little Feat-styled “Is It Really You?,” and “I Need You Need Me” (which includes some interesting early-synth leanings). By this time, however, frustration with long-time producer Perry began to take its toll. Creatively, the band and Perry were no longer in sync, as he continually took the “bite” out of their compositions to make them more radio-friendly. Even Rundgren’s contributions were a cause for concern: June later complained how he would hurry through sessions in order to get back to recording his own stuff.

The final album, Rock & Roll Survivors (1974), points in a new direction, with June replaced by Patti Quatro, and de Buhr by a returning Brandt. New producer Vini Poncia pushed the band to a Heart-like sound which led to both their biggest hit (“Butter Boy” rose as high as number 29) and their dissolution (the band broke up after this release). But why is the legacy of Fanny so soon forgotten? That’s a lot of albums in a short amount of time. In 1979, none other than David Bowie called out their importance to rock and roll.

In 2002, Rhino Records released a 4-CD box set of the first four Fanny albums. There was a reunion concert in 2007, where the group received the Rockrgrl “Women of Valor” award. But what they really deserve is a great rockumentary. Martin Scorsese? Ron Howard? Liz Garbus? Any takers out there?