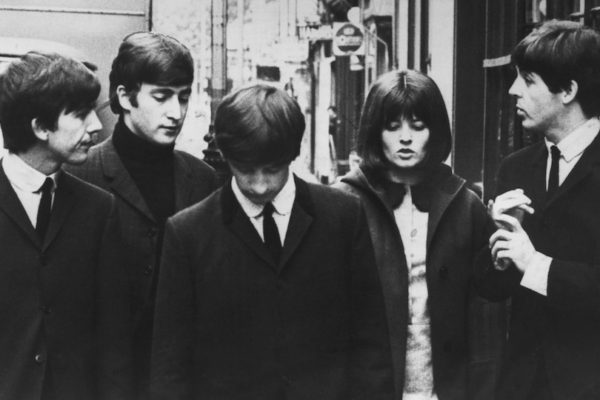 Name a Beatles song with the word “love” in the title. It’s not hard to do: “Love Me Do,” “Love You to,” “She Loves You.” There are well over a dozen of them and frankly, they’ve lasted a lot longer than a dozen roses. So in the spirit of upcoming Valentine’s Day, we present you with a list of the nine most popular tracks that John, Paul, George, and Ringo recorded which give a nod to “love” in the title. There are no personal opinions as to what got picked here: these stats are straight from Billboard magazine. Give a listen; there’s not a song not worth loving in the whole bunch.

1. “She Loves You” (1963): 15 weeks on chart; peaked at number 1
The cultural importance of this single cannot be overstated. Catchy beyond belief and spangled with a deliciously infectious “Yeah Yeah Yeah!,” this song became a global breakout hit after The Fab Four’s performance on The Ed Sullivan Show. Propelled by Ringo’s stellar drumming, “She Loves You” became the best-selling single of the 1960s in the United Kingdom, while Rolling Stone ranked it among the 500 Greatest Songs of All Time.

2. “Love Me Do” (1964): 14 weeks on chart; peaked at number 1
This catchy little harmonica-embellished number was written by McCartney when he was a callow, truant, budding artist of 16 — before The Beatles were an actual entity! Released in the U.K. in 1962 (and in the States two years later), this tune actually goes far back enough that Pete Best was one of the drummers on an earlier incarnation. (Don’t worry: the version we all know and love has Ringo’s beats and Lennon’s playfully plaintive harmonica.)

3. “All You Need Is Love” (1967): 11 weeks on chart; peaked at number 1
Sprung on the planet as part of Our World — the first live global TV emission seen by over 400 million people — this joyous single evolved into the undisputed anthem of 1967’s Summer of Love. After its bright, brassy “La Marseillaise” lead-in segues into a salvo of LOVES and a full orchestra, the universal message becomes more than clear. A friend once asked  Lennon what he felt his best all-time lyric was, and his instantaneous response was “All You Need Is Love.” Far be it from us to question our favorite Working Class Hero.

4. “Can’t Buy Me Love” (1964): 10 weeks on chart; peaked at number 1
This anti-materialist love song was written under the stress of having to follow the tremendous hit “I Want to Hold Your Hand.” Well, it succeeded handily — charting at number one in the U.S., the U.K., Ireland and The Netherlands. Stripped of their signature background harmonies, “Can’t Buy Me Love” has a clean, determined sound that has held up magnificently.

5. “P.S. I Love You” (1962): 8 weeks on chart; peaked at number 10
The flip side of the early single Love Me Do and included on the 1963 album Please Please Me, this McCartney-driven entry is an undeniably appealing ballad of the old school; the letter-writing format is a nod to Buddy Holly, whom Macca greatly admired, and to The Shirelles, who had a hit with “Soldier Boy.” It charted at number 10 on the U.S. Billboard 100 and in the U.K. ascended to number 4 in 1982, twenty years after its initial release!

6. “Real Love” (1996): 7 weeks on chart; peaked at 11
A Lennon track recorded under a slightly different name (“Real Life”) in 1979 and 1980, the song languished in obscurity until 1988 when it appeared on the soundtrack of the documentary Imagine: John Lennon. Reworked in the studio with the three surviving Beatles, it was then released in 1996 to wide acclaim. “Real Love” was their last Top 40 hit — a sweet bit of nostalgia of many layers.

7. “And I Love Her” (1964): 9 weeks on chart; peaked at number 12
This moody ballad from A Hard Day’s Night has made it all the way to number 12 on the Billboard Charts. Credited to Lennon/McCartney, the best part of the song may actually be the gorgeous guitar riff played by George Harrison with an elegant simplicity that seems to anticipate Yesterday.

8. “All My Loving” (1963): 6 weeks on chart; peaked at number 45
This tuneful track by McCartney — written as poetry before being set to music —was not initially released as a single in either the U.S. or the U.K., but the song garnered so much radio play that EMI released it as an extended play title track which spiked at number one in Canada. Its classic melody, fine guitar work by Lennon, and subtle Country/Western feel make for an especially pleasing song.

9. “Sie Liebt Dich (She Loves You)” (1964): 1 week on chart; peaked at number 97
Generally viewed as a novelty in the The Beatles song catalog, this German-language rendition of “She Loves You” was the brainchild of the German division of EMI hoping to score big in Deutschland. Wisely the Fab Four kept the “Yeah Yeah Yeah!” refrain in English, which may partly explain how this novelty managed to chart in the United States at all.

PS. These “soundalike” bands took their lead from the early Beatles.  And these were the most enduring singles on the charts by the Fab Four.