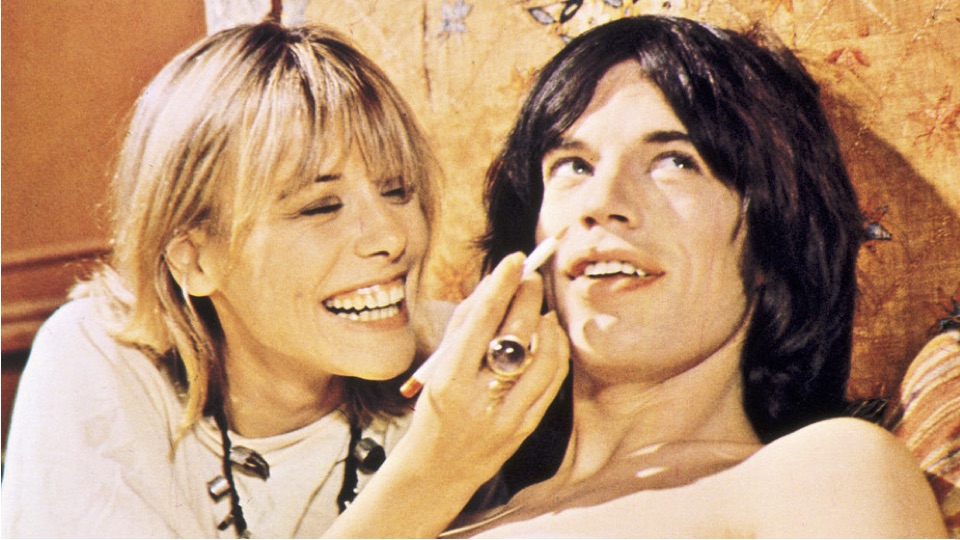 If “Famous Female Rock ‘n’ Roll Muses” was a category on Jeopardy, the most obvious and easiest answer for $100 would be “Who was Yoko Ono?” A trick “muses” answer/question would be, “Martha, an Old English Sheepdog was the female inspiration for this Beatle to write ‘Martha my Dear.’ (Who is Paul McCartney?)”

And then there’s Anita Pallenberg, Keith Richards’ long-time paramour and actress, who was a category unto her herself and a “Multi-Muse” if ever there was one. Singer/model Marianne Faithfull accurately said Anita provided an “evil glamour.” Richards admitted in his autobiography:

“I like a high-spirited woman. And with Anita, you knew you were taking on a Valkyrie — she who decides who dies in battle. She knew everything and she could say it in five languages. She scared the pants off me.”

Under Anita’s thumb, her first Stones lover, Brian Jones, wound up dressing like her; wearing her signature floppy hats. Once she and Keith became an item, he too became “Anita-ized,” taking to wearing furs, feathers, earrings as well as floppy hats. Alas, Anita pushed the envelope more than she and Keith pushed heroin-filled needles into their arms. Her often immoral choices became fodder for Stones songs. Keith wrote “Gimme Shelter” in response to the affair she was having with co-star Mick Jagger on the set of Performance. Famed photographer, Cecil Beaton, who was also on that set, quipped: “Mick began to make love in earnest.”

In addition to being jaw-droppingly beautiful, Anita could always drop many a jaw with comments like her proclaiming she had the hots for Osama Bin-Laden who was still alive and on the run when she wise-cracked:

“I find him very attractive. If you run into him, send him my way.”

The Stones and the Beatles may have had the muses with the highest profiles, but recent Rock ‘n’ Roll Hall of Fame inductee Marc Bolan’s muse, Gloria Jones, had a singing voice second to none—even better than Yoko’s and Linda McCartney’s!

Gloria’s main claim to fame is that she’s the original singer of “Tainted Love” which was unbelievably chosen as the B-side of a 1964 single but which later became a timeless hit for Soft Cell in 1981.

Her debut album, Come Go With Me, featured the stunning “Heartbeat, Part 1 & 2” single that opened the record industry’s ears but not the wallets of the record-buying public. Gloria decided that if she couldn’t be the main act, she’d sing behind the star. She became a go-to background singer, a livelihood she recalled in the 2013 documentary 20 Feet from Stardom. But when her chance finally came in 1973 to grab the brass ring, she snubbed her manager’s call to promote her new album in order to be with her “soul-mate,” the married Marc Bolan. Gloria recalled:

“I had just finished recording an album called Share My Love for Motown and the manager called me and said he wanted to book me into the Continental Club in Los Angeles. I got a call from Marc and he said: ‘I need you to come and help me finish an album in Germany.’ I made the decision to go with him. I sent my management a telegram from Germany saying: ‘Sorry, I’m in love.’”

Related: “T.Rex- Welcome to the Rock Hall of Fame”

Yes, Marc gained a muse but gradually lost his musical way with widely panned albums like Zinc Alloy and the Hidden Riders of Tomorrow; which wasn’t even released in America. He even gave critics an easy target by naming an album Bolan’s Zip Gun, whereupon he was shot down with cliché reviews like “Gun fires blanks.” Six months after the release of his Dandy in the Underworld album, which saw him find his creative footing (with NME magazine calling it his “best work in five years”), he lost his life when Gloria lost control of their Mini Clubman 1275 GT car and crashed it into a tree and guardrail.

Gloria suffered major injuries and spent weeks in a hospital where she learned that she faced charges of “being unfit to drive” and “driving a car in a dangerous condition.” Rather than face a very sticky legal situation in London, she and her son, Rolan, decamped to Los Angeles. Rolan explained:

“My mother went from a millionaire lifestyle to virtual poverty. Things got very tough.”

It was an estate that was virtually picked clean shortly after Marc died; when fans ransacked his home and stole master tapes, artwork and souvenirs. All that was left was a pending court case against Gloria and a few eerie, foreshadowing conspiracy theories.

Lyrics from his “Solid Gold Easy Action” include:

“Picking foxes from a tree.”

Conspiracy nit-pickers noted that his Mini’s license plate was 1275 GT – FOX 661L and that the London Fire Brigade removed this “Fox car” from a tree.

Unlike Paul McCartney’s rumored car crash death, there haven’t been any reports of T-Rex records being played backward for more deathly clues…yet.