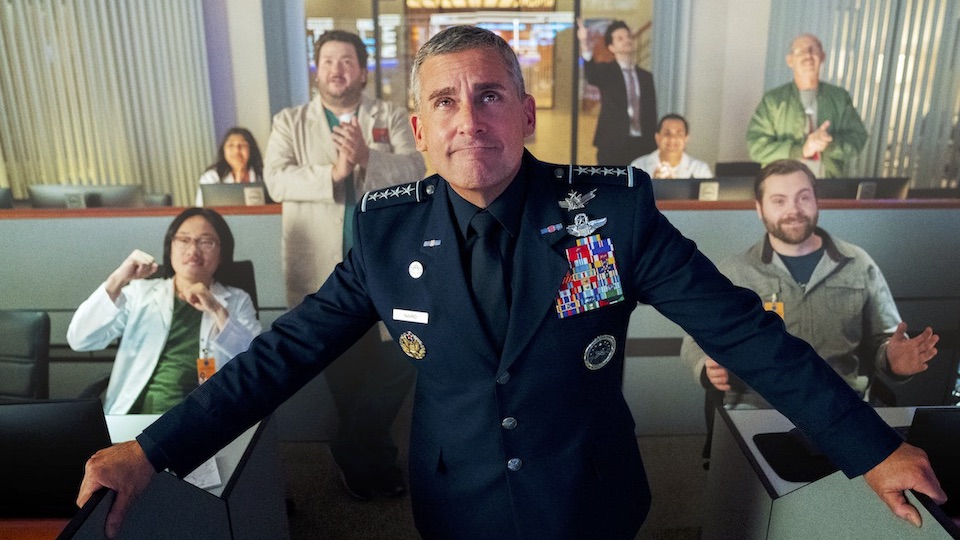 Have you ever used a recipe that has all the right ingredients but, in the end, didn’t taste quite right?   The first season of the buzzed-about Netflix series Space Force was released in late May. The series was created by The Office creator Greg Daniels and Steve Carrell, who stars as the head of Space Force, General Mark Naird. If that’s not enough, the cast includes John Malkovich (Places in the Heart, Line of Fire), Jane Lynch (Glee, The Marvelous Mrs. Maisel), Patrick Warbuton (Seinfeld, Family Guy), Roy Wood, Jr. (The Daily Show), Noah Emmerich (The Truman Show, Super 8), Lisa Kudrow (Friends), Kaitlin Olson (It’s Always Sunny in Philadelphia), Jimmy O. Yang (Silicon Valley) and even the late Fred Willard (Best in Show). That acting and comedy talent provides quite the launchpad for a new series – but sadly, it’s wound up as a partial misfire.

Related: “The Kids In the Hall Makes A Comeback”

During this first season, the “Space Force” is formed, and four-star General Naird (Carrell) is put in charge of this newest branch of the military. In Joint Chiefs of Staff meetings, he is summarily disrespected by the other branches, except the Coast Guard who is considered even lower than Space Force. We’re introduced to Naird’s wife, Maggie (Kudrow), and his daughter Erin (Diana Silvers) as they move to the Space Force HQ in Colorado. We immediately skip to a year later, and suddenly Maggie is serving a 40-year prison sentence for a crime that is not divulged. Space Force is behind schedule and in disarray, and daughter Erin is miserable. Through a direct order from the president, always referred to only as POTUS, a planned launch is hurried but successful. And despite a problem with a competing country, this leads POTUS to mandate that Space Force immediately proceeds to land on the moon and create a moon base. In the meantime, Naird is attempting conjugal visits with his wife, arguing with his chief scientist, trying to navigate the whims of the POTUS (and FLOTUS!), attempting to gain funding from Congress and fighting war-hawk Air Force General Kick Grabaston (Emmerich).  Yes, it’s pronounced “grab-ass-ton.”

There’s a lot crammed into the series. While Carrell attempts to avoid a Michael Scott impersonation (mainly by making his voice gruffer), there’s an attempt to gain empathy for daughter Emily whose mother is in jail and father is otherwise work-occupied – which doesn’t work very well. Emily’s dialogue, emotions, and acting are all grating. They are assisted by a social media director, Tony Scarapiducci (yes…) played by Ben Schwartz (Parks and Recreation) who’s more concerned with tweeting and the social media sentiment about Space Force. His purpose on the show is to ridicule social media platforms, but that joke has been done before.  General Naird is chauffeured via helicopter by Captain Angela Ali (Tawny Newsome), a Space Force pilot, then astronaut who ends up being daughter Emily’s one friend, and who strikes up a slightly unbelievable relationship with senior scientist Dr. Chan Kaifang (Yang). Naird’s father, played by Fred Willard, is insightful but is played for laughs by suffering from dementia. And as the bad guys? China, as the imposing and efficient competition for space domination (when you can’t use Nazis….) Did I mention “crammed” and “a lot”?

In all this muddle, there are some solid chuckles and entertaining moments. The words uttered by the first American female of color upon stepping on the moon are unexpected and quite funny. Carrell’s character is not bumbling or arrogant like Michael Scott, though he still spills into Scott-isms, unfortunately.  As always, Jane Lynch has pure comic timing. For me, the gem of the cast is John Malkovich, who is frustrated by the government, General Naird, China, and generally everything else. His wry attitude and sarcastic demeanor are underplayed to perfection. Often just a sad or exhausted glance is all he needs to evoke a laugh. His subtle antics played off of Carell’s nervousness at a Congressional hearing are comedy-perfection.

What doesn’t work is trying to lampoon the president, social media, the government machine, inter-military rivalry, Congress, the Chinese, the Russians, teenage daughters, office romance, women’s jail, and military bravado all in one series. That Congressional budget meeting includes characters meant to be Nancy Pelosi, Chuck Schumer, Alexandria Ocasio-Cortez, and a generic old-white-man Republican Congressman (who believes the world is flat). There are just too many individually-good ingredients. You end up underappreciating the cleverness of FLOTUS trying out a variety of outrageous Space Force uniforms. All that said, when the show does nail a gag, it’s good for some solid belly laughs. Further, the series is polished, the special effects are very good, it moves along at a decent pace, and the acting is well done.

The critics and public have given the show middling reviews, but I think that’s mainly based on the high expectations for the stellar cast, and the thought that making fun of “Space Force” should result in automatic hilarity.  But go back and watch the first season of The Office – when Michael Scott was more jerk than lovable doofus – when the cast was being switched around – before Toby had more than a brief appearance – before Dwight Schroot’s abrasiveness was dialed back – you’d see some similarities to Space Force season one.   It was sort of a mess. Mind you, Greg Daniels and Steve Carrell are no newbies to comedy, so I think there will be some adjustments in Season Two if hopefully, it gains renewal. And anyway there’s plenty to enjoy in the first season, so it’s worth a watch after you’ve watched the better-rated releases. Here’s hoping for a renewed, tuned up and funnier Season 2 of Space Force.

Photo: Steve Carrell and the case of Space Force (fair use image)

1 comment on ““Space Force”: Lift-Off — Orbit Not Quite Attained”