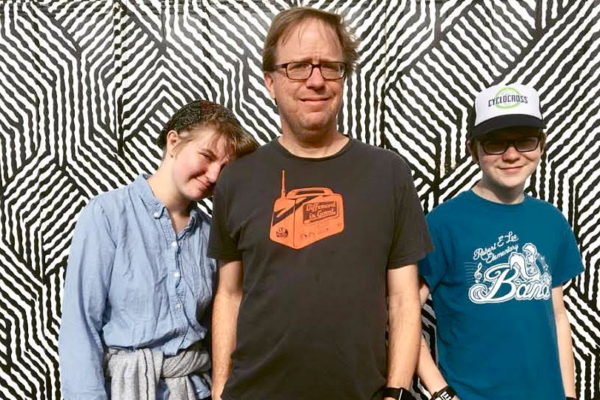 How does a one-time law professor turned litigator (and a father of two) go from booking the occasional concert of family music to co-founding a family music conference to starting a record label for family music that raises money for good causes like Girls Inc. and the It Gets Better Project? Well, in Bill Childs case, it’s simply a matter of getting involved with his local community. Then getting more involved and more involved until he’s hanging out with They Might Be Giants and Mates of State with his kids before the next broadcast of his radio show Spare the Rock. Read on to learn more of this peerless promoter of kid-friendly music.

Q: How did your weekly radio show Spare the Rock on KUTX in Austin come about? Did it precede or follow the label? Is that how you find artists for the show?

A: We started in western Massachusetts in 2005 and then moved here in 2012, starting on KUTX in 2015. We are syndicated via PRX and are on the air on stations from Alaska to Virginia. I’d done radio in college (Macalester College in St. Paul) and have always loved radio. I saw a flyer for a community station (Valley Free Radio) in Northampton, Massachusetts, and I was looking for a way to get involved in the community. (We’d moved there in 2004.) So we started on the air there, then local commercial station WRSI, 93.9 The River invited us to join them there. It wasn’t until we were several years in that I started the label, when my friend Dean Jones asked for some help planning a Haiti benefit record. [Dean, who’s an insane genius, has produced or co-produced all of the releases on the label.] The show is definitely the way I know what’s going on in family music and how I got to know a lot of the artists that we’ve invited to have on the records.

A: Your releases at Spare the Rock have raised funds for various causes. Which one has been the most successful?

Q: Many Hands, by a fair margin, has raised the most money. To some extent I think that is due to the immediacy and urgency of the need — we put it together just after the earthquake [in Haiti]. But it also helped that it had a huge-for-family-music hit in Jonathan Coulton’s “The Princess Who Saved Herself,” which got tremendous airplay and continues to generate significant sales and royalties. The other difference is that it is ever harder to actually generate revenue from albums in the era of streaming.

Q: You’ve said that Science Fair, Spare the Rock’s album for Girls Inc., was inspired by your parents. How so?

A: My dad was an electrochemist and my mom was a chemical engineer. Both were active in feminist politics and felt strongly about the importance of science education for everyone. (And my siblings both have science Ph.D.s.) My dad, who loved teaching his grandkids — especially my daughter, his oldest grandchild — died in 2009 and doing a record that would help get more science education for girls seemed like a good tribute.

Q: You’ve had some really big names on your releases: Pete Seeger, They Might Be Giants, and Mates of State. But I believe Elizabeth Mitchell is on all your releases. What is it about her that keeps you coming back? Do you have a favorite song by her that you’ve recorded?

A: She’s just the best, together with her family and broader group of collaborators. She’s got a rare combination of love and respect for the classic family music while never sounding dated. I’d have to say her song on Science Fair — written by the equally amazing Molly Ledford of Lunch Money, who’s also on at least three of the four records &3151; is probably my favorite. But it’s a tough pick.

0 comments on “The Big Heart Behind Spare the Rock Records”