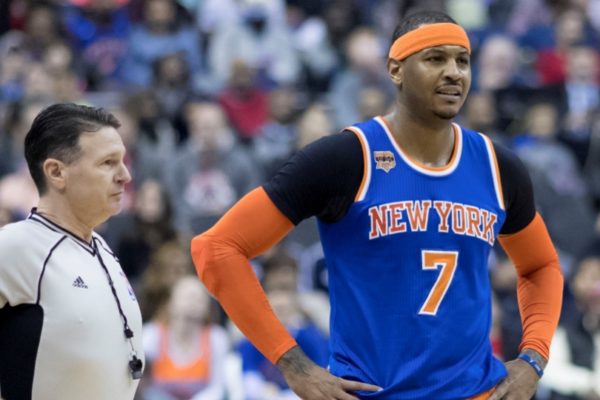 Sticking with your team through the rough times, the losing seasons, the superstar injuries — that’s always been the mark of a true fan. But when does it become the mark of a sucker?  How many post-seasons and All-Star Games without your boys are you supposed to sit through? What happens when the team seems to be giving up on itself? It’s been over two decades since I became a Knicks fan — during the 1993-94 season, one of the great Knicks lineups, one that almost won a championship. The captain was Patrick Ewing, the Hall of Fame center who would come roaring up the court, a god of thunder flying out of the sky with a layup instead of a hammer. Alongside him, John Starks, former supermarket bag boy and D-Leaguer turned NBA Sixth Man of the Year as well as Charles Oakley, the closest thing the NBA had to John Shaft, with his elegant threads and fearful reputation as an enforcer. It was a glorious run, full of spectacular plays and standing ovations, it brought New York City together in shared rejoicing, everyone abuzz with last night’s replay, hugging strangers after each victory. Then, of course, it all collapsed in Game 7 against the Houston Rockets, Starks missing shot after shot, all intercut with the live feed of O.J.’s slow-rolling white Bronco.

Then the Knicks rose again in 1997, as the first — and still only? — eighth seed to make it to the finals. They were a team in that magical sense of the whole being greater than the sum of its parts: Loose cannon Latrell Sprewell, untested young power forward Marcus Camby, the enigmatic Larry Johnson, all led by Diet Coke-swilling stress case, assistant-turned-head coach Jeff Van Gundy. Had it not been for a freak fall in a December game that took Ewing off the court for the duration, that championship banner would be hanging from the rafters of Madison Square Garden now.

I have to remember those days, those teams, because remembering is what keeps me a fan. Because, after that… well, it all went to shit. Someone born when the Knicks were last in the NBA Finals is almost old enough to buy a beer. Which, if they are a Knicks fan, they have needed for a very long time: The team has made it past the first round of the playoffs once in this millennium and this marks the fourth season in a row where the team hasn’t made it to the postseason at all.

But mostly, the team seemed dedicated to acquiring every injury-prone, just-past-his-prime player for the highest price tag possible, adding a few random journeymen and rookies, then reshuffling the same recipe with slightly different ingredients over and over. There were moments — 2012 Defensive Player of the Year and handsome man Tyson Chandler finally giving the team some on-the-floor guidance and wisdom, especially during the emergence of undrafted Harvard anachronism Jeremy Lin along with his nerd squad teammate Landry Fields (Stanford). Iman Shumpert and J.R. Smith brought some excitement — and were then promptly traded away to help bring LeBron his ring. Each time I would think we were finally back on the right track, the track leading to winning seasons and playoff games and each time, it’d end in — well, not tears, but with much cursing and the occasional throwing of objects at the television set.

Much of the responsibility for this foul decision-making can be laid at the expensively shod clay feet of James Dolan, whose inept management has sullied countless New York City landmarks from the Rangers to the Rockettes. A billionaire with a blues band, Dolan took over as president of the Knicks in 1999 and virtually nothing good has happened for the team since.

When Phil Jackson came to the Knicks as GM, some thought it would be the beginning of a new era, that Jackson would be be a yin of irrefutable basketball wisdom to Dolan’s team-wrecking yang. After all, the last time the Knicks had won the NBA championships, Jackson was playing power forward. It made perfect Zen Master sense for Jackson to cross the nation accumulating 11 more rings before returning to the site of the first to win the last. Of course, Jackson has since then blown through four coaches in three seasons — three losing seasons, I might add. These days, Jackson seems less concerned with his Don Quixote-like mission to run the triangle offense through Manhattan than he does with sending bizarre and player-alienating Tweets. We’ve passed a comedy of errors into a tragedy of carelessness. But, still, my team, right? Right?

Then came the day Charles Oakley got hauled out of Madison Square Garden in handcuffs. Apparently he told Dolan he was doing a lousy job with the team… and Dolan had him surrounded by security, hauled out and banned from the Garden. It was a weird face-off between one of the most beloved Knicks veterans and a man that every Knicks fan despises and, sure enough, the next Knicks game saw fans chanting Oak’s name and Spike Lee wearing his jersey. NBA president Adam Silver paid a visit to Dolan and Michael Jordan himself intervened: Charges were dropped, bans lifted but Oakley still hasn’t returned to the Garden. Oh, he’s been to Knicks games — when they played the Cavaliers out in Cleveland, Oakley was a personal guest of the team owner — but not back to the Garden.

The Knicks closed the season with a 31-51 record. James Dolan celebrated by getting in an altercation with a season-ticket holder outside of Madison Square Garden (whom he promptly banned). Former hoop deity Phil Jackson is now commonly referred to as a “disgrace” in the media. Center Joakim Noah got a 20-game league suspension for using a banned substance and Carmelo Anthony’s wife is loudly and publicly dumping him after he knocked up a stripper. Is it any wonder that the Knicks’ main asset and future-of-the-team Kristaps Porzingis is reportedly getting fed up?

Well, so am I. If loyalty and tradition are the ties that bind, it would seem that, for the Knicks, those ties can be undone at any time — whether you’re today’s superstar or yesterday’s legend. I’m not there so I can wince at today’s 15-point loss or the way they dropped that lead in the fourth quarter. I’m there because I still remember the old days with love and respect. And if the Knicks as an organization don’t share those feelings, why should I?

I may live 2,500 miles away now, but I’ll always be a New Yorker. I’ve still got a Ewing pennant and a Sprewell rubber duck in my bathroom (and the Ramones on my turntable and Damon Runyon on my bookshelf). But perhaps it is time to begin considering my options, expanding my horizons. Anyone know a nice NBA team who’s looking for a fan?

1 comment on “It’s Not Easy Being a Knicks Fan”