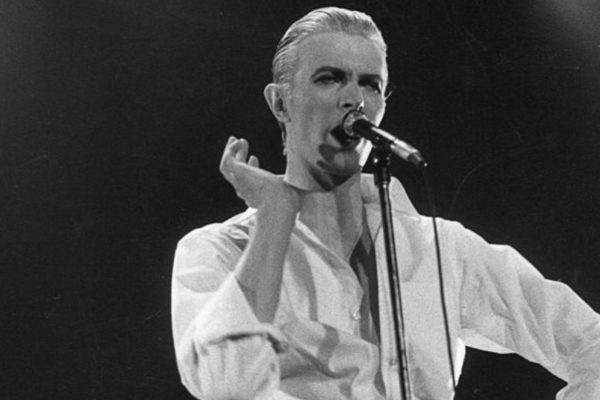 The first lines that open “Station to Station” immediately announce the arrival of a new Bowie era: “The return of the Thin White Duke / Throwing darts in lovers’ eyes.” Actually, the three minutes of instrumental music before that do the same — the sound effects, atonal guitars, and the menacing groove make it perhaps his most experimental opener up to that point. The fact that halfway through it switches gears and becomes a disco-influenced number only solidifies that idea. Lyrically, the title track gives us even more clues as to where Bowie’s head was at the time — it is filled with symbolism drawing from all kinds of spiritual/philosophical sources and it also features the famous “It’s not the side effects of the cocaine / I’m thinking that it must be love.”

Indeed, the album Station to Station was recorded in the midst of a life-threatening drug addiction for its creator. The story goes that Bowie used to live on a diet of nothing but cocaine, milk, and peppers at the time. This took a toll on him not only physically, but psychologically as well — by his own admission, he lived in a state of constant fear and paranoia due to the hallucinations, and his home was filled with stuff like Egyptian artifacts and black candles that only accentuated those feelings. Things got so far out, that he barely remembers recording the album at all. A representative song here for what Bowie was going through is “Word on a Wing,” which is simply one of the greatest religious songs in the rock canon, right next to Velvet Underground’s “Jesus.” And just like that one, it is not a celebration, but rather a plea of help from a man at the end of his rope. I think anybody, regardless of their religious beliefs, could at one point relate to a line like “Lord, I kneel and offer you my word on a wing / And I’m trying hard to fit among your scheme of things,” especially when sung so passionately.

Station to Station is often described as a transitional album between Bowie’s plastic-soul era and the Berlin trilogy that would follow. That makes sense given that his backing band is also a mix of old (guitarists Carlos Alomar and Earl Slick, and drummer Dennis Davis) and new (bassist George Murray and keyboardist Roy Bittan). A song like “Golden Years” — easily the album’s most accessible point — wouldn’t have been out of place on Young Americans, while “TVC15” and “Stay” already show a strong Germanic kraut-rock influence with their robotic, cold, distant grooves. Also worth pointing out is that The Thin White Duke’s minimalistic, black-and-white outfit is in fact another send-off to the German Expressionism era of film.

For all of its messy background story, Station to Station is surprisingly consistent as a whole. Every single one of its six songs has plenty to offer, including the oft-forgotten Nina Simone cover that closes the album. Said to have been inspired by the two legends meeting, “Wild Is the Wind” is the perfect ending here with its eerie, pacifying air and another great vocal performance. It shows that Bowie could barely do wrong in the ’70s, no matter how many genres he explored. Station to Station is yet another re-invention, another record that sounds like nothing before it, and also another massive success that stands proud and tall along his best.

PS. You may also enjoy our post Bowie: The Karaoke King. Plus, check out Ovidiu’s posts on albums by Elvis Costello, The Beach Boys, and Lou Reed.