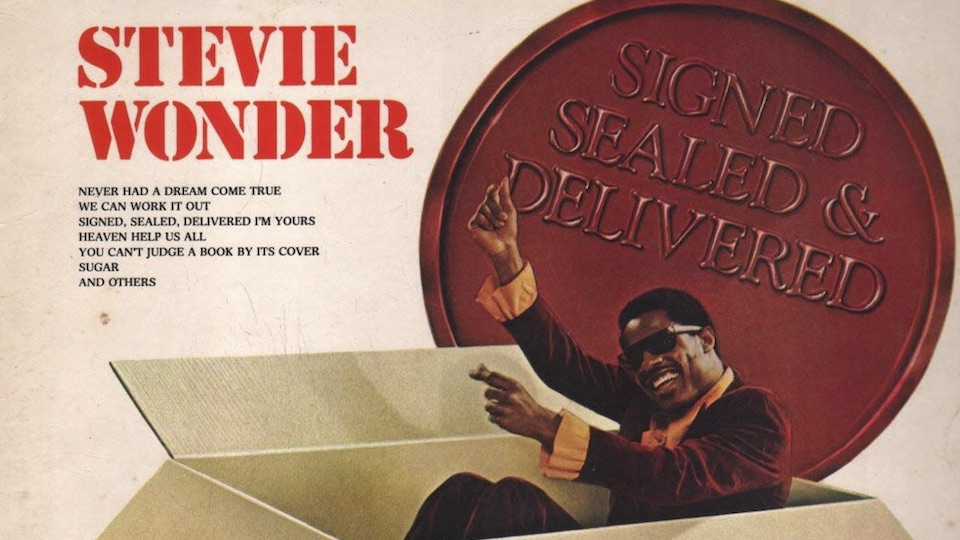 Nobody could dismiss Stevie Wonder’s hit-making beginnings as anything but a rollercoaster. Before entering adulthood, he hit stardom as a child prodigy who could charm everyone with his charisma and musical talent. He soon developed as a tremendously gifted songwriter, helming songs that combined Motown’s sparkly pop-soul formula with coming-of-age expression. His series of hit singles raged on and pastures of his success were greener than ever, but change was imminent. Any artist who has been under a label’s tutelage for a period of time strives to exert greater creative input. Wonder was no exception.

Related: “‘Songs In the Key of Life’ Is As Fresh As Ever”

Between 1967 and 1970, the maturing star issued four studio albums—the Motown-meets-deep soul mishmash I Was Made to Love Her, a harmonica-based, MOR pop curio Eivets Rednow, the respectable growth spurt For Once in My Life, and the mostly drab schmaltz My Cherie Amour—that found him in a holding pattern, wrestling artistic strains emboldened by Motown’s efforts in framing him solely as an R&B shouter and supper club balladeer. Although he was eager to leave their nest, Motown wasn’t ready to lessen their grip. At one point, bossman Berry Gordy, Jr. was reluctant to give into Wonder’s demands for the label to splurge on a Hohner keyboard, claiming it was an overly expensive luxury. He wasn’t even allowed to wear hip rags of the day, following the label’s strict protocol of wearing snazzy pent-up suits and leisure attire instead. Seizing his role as a musical disciple, Wonder spent more time at Hitsville, U.S.A. headquarters, widening his knowledge of the recording studio and tinkering with a slew of influences and ideas that roamed his brain. In one corner, he began to better assert himself in his songwriting, slowly extracting the nuances of the Motown Sound. In the other, he heeded the heady experimentation he absorbed from the likes of the Beatles, Jimi Hendrix, Sly Stone, Miles Davis, and Santana, and mapped a game plan.

“I had the confidence something good was gonna happen,” he said in a 1984 Musician Magazine interview. “But I didn’t know when. And then it began to happen.”

Related: “‘Rocket 88’: One of the Pioneering Songs of Rock”

That burning confidence bled through Wonder’s twelfth studio album, Signed, Sealed & Delivered. A virtual blast of effervescent pop-soul that signaled his growth as a serious singer-songwriter with unmatched vision, …Delivered was a change of pace the 20-year-old bargained for from the start. Even its hokey album cover hinted at a break from the Motown mold, showing a delighted Wonder bursting out of a postage box with the slogan “From Detroit with Love” stamped alongside cautions “Handle with Care,” “Fragile,” and “Do Not Drop.” A newfound sense of funky, free-spirited enthusiasm emerged in Wonder’s style, too. No single emphasized it better than the album’s classic almost title track, “Signed, Sealed, Delivered I’m Yours.”

Holding the distinction as the first single Wonder fully produced on his own, the genesis of “Signed, Sealed, Delivered I’m Yours” revolved around a tape of a rough instrumental he lent to one of his frequent collaborators, Lee Garrett. While tentative, Garrett got drawn into the melody that was captured on tape and brought it to the attention of singer-songwriter and Wonder’s soon-to-be wife, Syreeta Wright. All parties came together, trading lines, with Wonder’s mother, Lula Mae Hardaway later supplying the ever-memorable title and hook after hearing her son’s infectious melody. Cementing his love for earthy funk-hewn soul of Memphis’ own Stax Records, Wonder was accompanied by most of Motown’s house band, the Funk Brothers on the session to salt his groove with the super-tight rhythmic pulse it needed. Clever electric sitar hooks were employed, underscoring Wonder’s interest in Middle Eastern musical elements that were in vogue in psychedelic pop. Bolstering jubilant call-and-response background vocals from Wonder’s Wonderlove singers, Wonder soulfully croons from the perspective of a scandalous cheater, pleading to win back the mercy of his lover.

The jovial party classic became a massive hit, landing at number one on Billboard’s R&B chart and number three on its pop chart for six weeks. It later went on to be a defining political anthem, when former President Barack Obama used it frequently as the battle cry for his 2008 presidential campaign.

In addition to that signature classic, Delivered was front-loaded with notable singles that flaunted Wonder’s pop magnificence. He takes on the Lennon-McCartney songbook, revamping the Beatles’ 1965 folk-pop evergreen, “We Can Work It Out” (R&B #3, pop #13) into a slamming funk workout. Perky, distorted clavinet lines and thick backbeats powers this thoughtful cover right into its exhilarating finish, buttressed with Wonder’s energetic lead and overdubbed vocal work.

Romanticism blends with social concern on the Henry Cosby and Sylvia Moy-assisted ballad “Never Had a Dream Come True” (R&B #11, pop #67), which has a plaintive, country-tinged timbre with cleverly syncopated fuzzy guitar licks. An evocative gospel melody and arrangement anchor Ron Miller’s soaring pop spiritual “Heaven Help Us All” (R&B #2, Pop #9), with Wonder pleading for world salvation and unity in the times of chaos and hopelessness.

The remaining stock of Delivered veers stylistically with Wonder asserting more of his personality and influences into the Motown-oriented fare, molding his distinctive flair. Wonder’s playing-hard-to-get jam “You Can’t Judge a Book by Its Cover” brandishes deep-fried Detroit psych-funk, with an infectious clavinet-led melody. The album’s overlooked nugget is Leonard Caston’s gorgeously haunting “Don’t Wonder Why.” A melancholic piano-based ballad with fitting elaborate orchestration, Wonder turns in an emotional, gospel-charged vocal performance on unrequited love. The playful pop love pleasantries “Sugar,” “Joy (Takes Over Me),” and “Anything You Want Me to Do” are all built on punchy horns, rolling basslines, glistening guitar licks, and lively drum kicks that are as luminous as Wonder sings them. Majestic baroque pop-soul colors the reflective and forlorn “I Gotta Have a Song,” the heartbreaking “I Can’t Let My Heaven Walk Away,” and the sunny-side-up love ballad, “Something to Say,” with its oscillating melody and tonal harmonies that build on the chorus’ lyrical motif.

Released during a transitional period, Signed, Sealed & Delivered proved to be a surefire success. Thanks to the popularity of its hit singles, Motown’s unwavering promotional efforts, and Wonder’s increased public visibility, the album peaked on Billboard’s Pop Albums chart at #25 and its R&B Albums chart at #7. Listening to Signed, Sealed & Delivered beckons a series of bittersweet memories and heartfelt emotions. It marked the coda of Wonder’s glorious first act as well as a farewell to the golden age of Motown. While it’s not fully-realized or a total departure from the streamlined Motown mold, it deserves to be noted as the critical moment Wonder outlined his future greatness. From the consistent strength of the performances alone, it’d be apt to deem this album as Wonder’s first well-rounded effort, although its overall form and structure is very much in the vein of Motown’s pre-1971 product. There was no question Stevie Wonder was on the brink of uncharted territory, whether Motown executives and audiences foresaw it or not. Furthermore, it would only be a matter of time before he renegotiated his expired contract with Motown at age 21 and deliver what his newfound freedom entailed. Things would never be the same. Although it’s overshadowed and outpaced by Wonder’s uncontested classic 1971-1980 run, the boundless energy and pop-soul enthusiasm of Signed, Sealed & Delivered still has much to offer 50 years later.