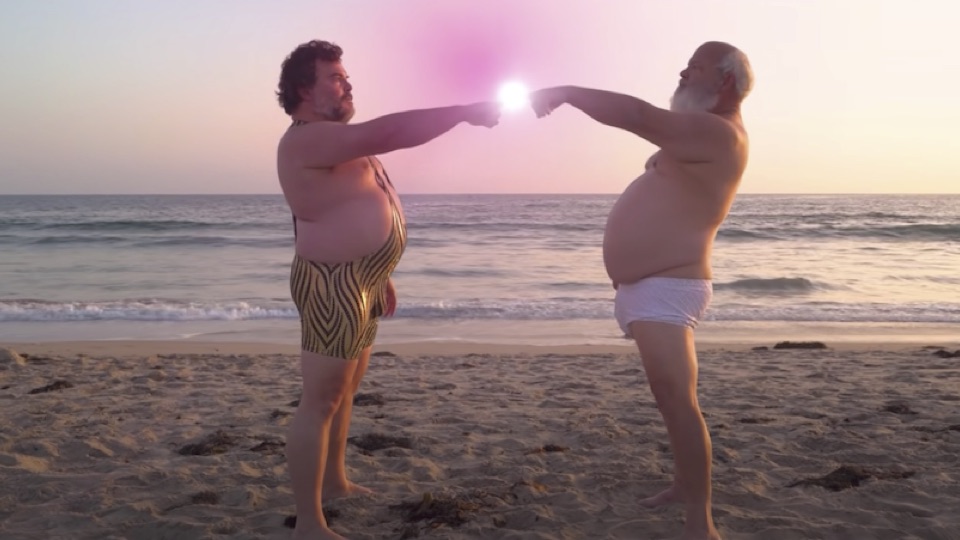 Jack Black has lovingly one-upped another giant in Tenacious D’s recent Beatles tribute. The release comes on the heels of a series of viral Instagram videos in which Black challenged Chris Hemsworth for the role of Thor. Black’s joyful shirtless dancing and hammering made many realize what some of us have long known: Jack Black is one of the sexiest men alive.

Tenacious D’s hilarious spin on the bookends of the Abbey Road medley gives more of Black’s signature moves and gestures (which often show off how good he is with his fingers) while musically realizing the truth about the love that’s been there sleeping.

The duo, musician-actor Black and his longtime bandmate Kyle Gass, recently released “You Never Give Me Your Money” and “The End” to fundraise for Doctors Without Borders. In the video, Black and Gass alternate between wearing wannabe House of Nutter suits and loin coverings in various styles. The costumes and other visuals make absurd sense in what is really a homage to one of rock’s greatest romances, the love story of four Beatles.

Black and Gass are the perfect pair to execute this interpretation of the magic feeling that has nowhere to go—and not just because of Black’s previous rendition of the Cute One. (Jack’s Macca demands to be seen as “impish and whimsical” in 2007’s Walk Hard: The Dewey Cox Story.)

Tenacious D is both a real band and a meta-band, an affectionate, funny, and weirdly earnest parody of rock and heavy metal. They know what they are doing, and we know what they are doing, often because we are laughing at their outrageous ironic sincerity. But they also really rock: Black’s elastic, powerhouse voice goes to Robert-Plant-like places, and Gass shreds on the acoustic guitar.

Tenacious D’s take on the medley knows why Beatle People are so excited to see Peter Jackson’s Get Back at the end of 2021: the three-part Disney+ event promises to put the Beatles back together again, four Humpty Dumpty egg men cheerfully re-situated on the wall. Promotional footage has previewed the smiles that seem like they could have kept the band members married to each other.

“Divorce” is, after all, the word that John Lennon consistently used for The Breakup.

Abbey Road’s medley resists and mourns the impending loss, especially when Paul McCartney sings about inadequate “funny paper,” a reference to business dealings and legal paperwork that would cause even more heartache for the band members in the coming years. Black holds up a giant magnifying glass that gestures toward all the fine print.

Tenacious D captures the last-chance hopefulness of the final songs on Abbey Road with a raucous celebration of the musical intimacy between men. Jack and Kyle’s half-clothed bodies and harmonic tightness cast all of that homoerotic energy onto the video’s surface.

Fans of Tenacious D have already heard their signature “roo-do-do-do” scatting on “The End” in concerts, but the effect is extra special when Black vocally replicates Ringo Starr’s one-and-only drum solo with an animated drum kit. In addition to the suits and gravedigger denim, Jack and Kyle wear purposefully bad wigs, along with various wire-framed sunglasses. They even allude to a post-Beatles driving scene in the “Helen Wheels” video featuring Paul, Linda, and Denny Laine.

Tenacious D is also telling the Beatles’ love story by tracking the D’s own tropes onto these Abbey Road songs. Echoes of jams like “Tribute” (a song about “the greatest and best song in the world”) are heard in the arrangement, and the video briefly recreates the snowy mountaintop scene from 2001’s “Wonderboy” video (an ode to a hero with a secret source of power who sits in “a castle high above the mucky-muck” and whose nemesis is Nasty Man).

By referencing themselves, Tenacious D still pays tribute to the Beatles, who were that oh-so-sweet dream that came true in real life—for a little while at least. Going on three decades, Tenacious D has been riffing on a version of that dream, what they once termed “the rock star mythos,” which the Beatles’ breakup narrative helped to entrench.

In one of their late Nineties HBO episodes, “Death of a Dream,” “JB” and “KG” (their nicknames for each other) learn that the sasquatch is real, which means that rock stardom must be real, too. (Don’t worry if you can’t follow that logic.)

In their televised series, films, and even in concert, Jack and Kyle repeatedly “break up” by fabricating a rift, mourning the loss of each other, and eventually finding their way back homewards. Tenacious D knows that making up after being, to use George Harrison’s word for in-fighting, “bitchy” is what people want from a band.

The pair’s own rock meta-myth is subtext for the last scene of Tenacious D’s Beatles tribute. After a mishmash of disaster settings that evoke apocalyptic imagery loved by metalheads, the two men—scantily clad but wearing protective face masks—strut onto a beach, Black dressed in his too-small wrestling suit and Gass in tighty whiteys. They whip off the masks, a nod to Covid-19 reopening (and the charity they are supporting). While they gaze upon each other, their protruding bare bellies are, as usual, part of the gag while also being—don’t deny it—very sexy.

With the iconic ending couplet sung in voiceover, Black and Gass bring their index fingers together, conjuring a glowing pink orb that is a figuration of the reciprocal love being taken and given. They then turn and run into the sunset-lit ocean—standard film language for a happy romantic ending. The camera pans up toward the sky, and you can just catch a glimpse of Kyle losing his underpants in the current.

Even with the video’s toilet humor (literally, at one point Black is superimposed into a gigantic toilet singing about his crack), Tenacious D captures a dream of the Beatles that could come true, even if only in the rock imagination.

3 comments on “Tenacious D Does the “Abbey Road” Medley”