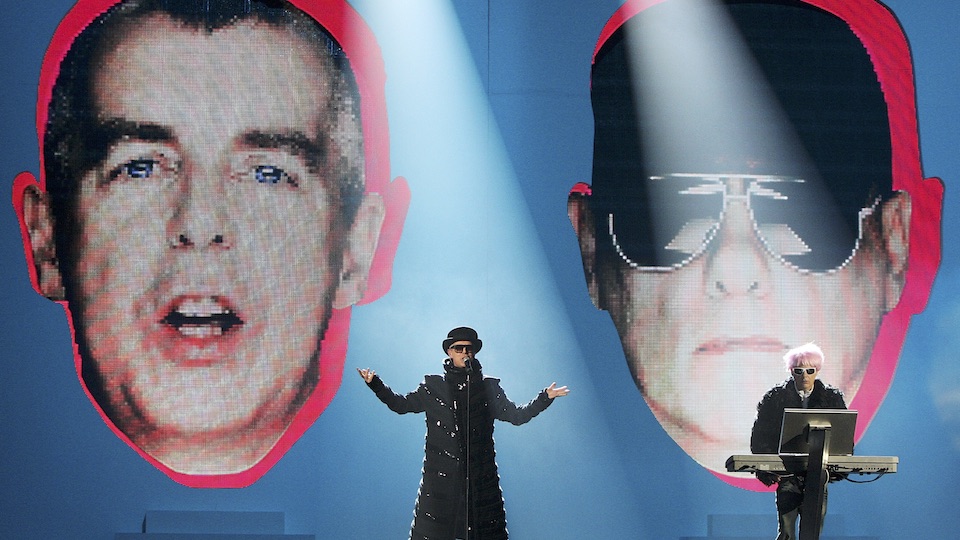 For a certain generation of music lovers, Pet Shop Boys were the theatrical flag bearers for pop music. Complete with a kitschy, cosmic outlook, Pet Shop Boys had a  sound that connected with the glitterati’s appetite for slightly weird music. Ballads like “Always On My Mind” and “Go West” stand with the great tentpole anthems of their age they won’t appear on my list. This is merely a selection that is theirs and theirs alone.

“Suburbia”: This pounding samba number from the duo’s first album epitomizes the early hook-laden numbers that decorated Pet Shop Boys’ eighties work. Splashing through the speakers with sophisticated patterns, the song shimmies to the rhythms that originated on the Latin channels. More importantly, Neil Tennant – a former pop journalist turned pop star – decorates the playful number with a levity that proved as instrumental to the band’s success as their impressive range of kaleidoscopic choruses.

“Opportunities (Let’s Make Lots of Money)”: Before they’d properly found their feet, the band, hungry for chart success, managed to nail the chorus from the get-go. “West End Girls” won them their coveted No.1, but there was more to these boys than hairstyles, and sharp suits. Take “Opportunities (Let’s Make Lots of Money)”, Tennant’s biting reflection of the currency that swamped his life’s work. OK, some of the chord changes are just showing off, but any song that can rhyme “Sorbonne” with that most coveted of “don” is already onto a winner. Chris Lowe’s solo is another career-high for the keyboardist.

“What Have I Done To Deserve This?”: Pet Shop Boys threw themselves deep into the sonic fabric of the eighties on their second studio album. With its dazzling exhibition of synth hooks, drum loops, and soaring choruses, Actually is every bit as good as you remember it as. Typical of an eighties release, the album holds one foot in the contemporary decade, while the other leads to the decade that gifted Phil Collins and Kim Wilde their signature Motown hits. Dusty Springfield was invited to join them, delivering one of the smokiest vocals of her later days.

“It’s A Sin”: Actually is the thinking person’s Pet Shop Boys album. This coruscation of the Catholic Church encourages repeat listens. Hitting the UK No.1 position, the group’s most polemical statement was also their most bouncy, most rewarding and — for the lack of a better pun — one of their more divine.

“Domino Dancing”: Five songs in and keyboardist Chris Lowe finally gets his moment of glory! Plastered over the salsa drum beat, Lowe’s slick keyboards splash in many circular directions. Zoning in on the lovers who waltz their way in and out of Tennant’s lamented tale, Lowe accelerates the synths to the rhythms of the fight. More than anything else, there is a wistful melody in the verses, reflecting a gravitas seldom heard in a Latin Rock number.

“Left To My Own Devices”: To this writer’s ears, this is the twosome’s lushest production, and certainly their most detailed. Exceptionally well put together, the song feels like a love letter to the days when progressive pop was king. No less a luminary than Yes vocalist Trevor Horn oversaw production of the track.

“Can You Forgive Her?”: With Reagan and Thatcher making way for younger, more colorful politicians, the pop arena felt duty-bound to follow in their colossal footsteps. Never one to shy away from the public eye, Tennant emerged from the sidelines as a gay pop star. “Can You Forgive Her?” is a gorgeous portrait of heterosexual disharmony.

“New York City Boy”: Typical of the Pet Shop Boys, they end the 20th-century dancing (rather than crying) the night away. Complete with a bass-heavy backing and an infectious hook, “New York City Boy” is every bit the spiritual successor to the fan-favorite, “Go West.” That this should come directly from the group’s pen, and not the Village People’s, only furthered the pioneering pair’s talents.

“Did You See Me Coming?”: Neil Tennant, friends with Johnny Marr since the electric eighties, had sung back-up on Electronic’s “Getting Away With It”; here the seminal guitarist pops up to return the favor. This is the pair’s most overt exercise in country music, its acoustic jangle and gravelly percussion the trademarks of a Willie Nelson single. And just as fans fear they’re becoming too “Americanised,” Tennant’s whimsical vocal returns the song to the music hall where it almost certainly hailed from.

“Dreamland”: In all respects a commercial recording, “Dreamland” is driven by a startling synth hook and artful vision. Aiding them on their journey to the top of the pop charts comes Years & Years’ Olly Alexander, the Harrogate singer’s mellifluous tones following Tennant’s yearningly romantic falsetto with shepherded ease. If unit sales were the measure by which the band based the song’s merit, they must have been satisfied with the outcome. Released on September 11, 2019, the song shot onto the Billboard Dance Charts. Even for someone with as impressive a falsetto as Tennant’s, this was an enviable high!

Photo: Neil Tennant and Chris Lowe of The Pet Shop Boys perform at the Brit Awards 2009 held at Earls Court on February 18, 2009 in London, England. (Photo by Dave Hogan/Getty Images)

2 comments on “Pet Shop Boys: 10 of Their Best Tracks”