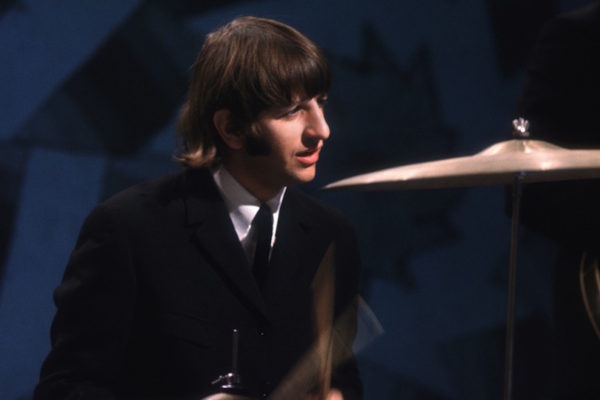 As the head-bopping, most affable drummer ever, Ringo Starr’s distinct drumming is a huge part of what gave The Beatles their unforgettable Fab Four sound. He established the feel for so many of the band’s greatest hits, from his furious high-hat work on “She Loves You” to his subtle brilliance on “A Day in The Life.” But truth is, Ringo’s drumming isn’t heard on every recorded Beatles song. There have been a very few exceptions. Let’s shine a light on four songs that made it to vinyl without Ringo’s signature touch.

“Back In The USSR”
The recording of the legendary double album The Beatles, forever known as the White Album, lasted from May to October of 1968. You could slice the tension in the studio with a knife, or in the case of Ringo, a drum stick. The usually happy-go-lucky percussionist had simply had enough during the recording of the album’s first track “Back in the USSR,” and had quit the band after having trouble picking up the drum pattern Paul was requesting. According to Beatle historian Barry Miles’ Many Years From Now, it was a “fluffed tom-tom fill” that prompted Paul to hop on to the drum set himself. Ringo would later be quoted as saying that he felt like “an outsider” and wasn’t playing up to his standards. Because of that, Ringo didn’t return for two weeks, leaving Paul to sit in on drums for this high energy classic rock hit. Supposedly John and George took over drums for the overdubs since, as engineer Ken Scott noted in The Complete Beatles Recording Sessions, Paul played other instruments on the second day.

“Dear Prudence”
The second song on the White Album that was recorded in Ringo’s absence was “Dear Prudence,” a tune in which John’s vocals are hauntingly beautiful on lyrics like “the sun is up, the sky is blue.” It was inspired by Mia Farrow’s namesake sister who had been hiding away and meditating during the band’s earlier retreat to Rishikesh, India.  During recording, the Fab Four was still dealing with being the Fab Three, so Paul filled in (again) on drums, nailing the high-hat work that was Ringo’s specialty — while also handling tambourine, bass, and flugelhorn. But the drums were never the hook for “Dear Prudence.” That fell to John’s sweet vocals and trippy finger-picking guitar work, both of which give the song a soothing, dreamlike quality.

Here’s a sweet little song, named after Paul’s sheepdog, a tune recorded in October towards the end of the White Album sessions. This one has Paul’s imprint all over it and he originally intended the song to be a challenge for himself on the piano. “Martha My Dear” opens simply enough, with Paul delivering a piano-accompanied verse recorded in one take. Then he hopped on over to the drum kit to overdub the rhythm section. He didn’t play all the instruments here mind you, as 14 session musicians came in later that night to add their imprint to George Martin’s orchestral score. And let’s face it: that brass and horn section is pretty remarkable. But if you think this happened during Ringo’s time away from the band, you’d be wrong. By that time, he’d already received the telegram from the band saying how much they loved the “best drummer in the world” and returned to find flowers adorning his drum kit.

“The Ballad of John and Yoko”
In John’s haste to musically commemorate his wedding to Yoko, he enlisted only Paul of the Beatles to record with him on Apr. 14, 1969. (Paul was on drums; John on lead and acoustic guitar.) Where was George? House hunting! And Ringo? Working on the set of the film The Magic Christian. That left John and Paul to produce this beloved song without them. This upbeat tune and comedic romp is far from the somber ballad that its title might suggest. Plus, it reunited the duo with longtime Beatles engineer Geoff Emerick. Paul has been quoted in the book Many Years From Now as saying he was “surprised with just the two of us on it, it ended up sounding like The Beatles.” And you know what? He’s right.

46 comments on “That’s Not Ringo on the Drums?”