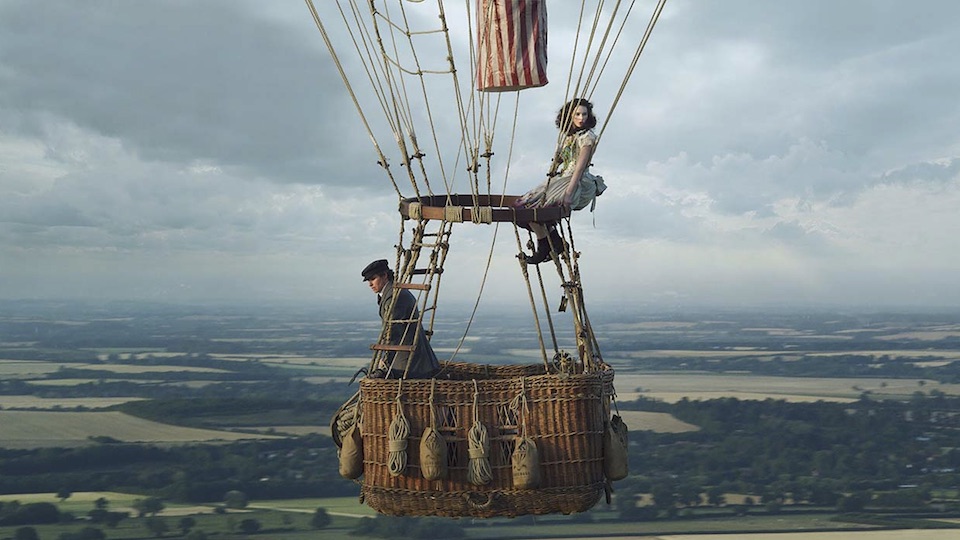 Just in time for the holiday season, the delicious, frothy The Aeronauts flies in to float through dazzling Technicolor skies. Director Tom Harper focuses on a historic balloon ride, one that’s world’s away from his grittier project, Peaky Blinders. Screenwriter Jack Thorne, whose stage-play Harry Potter and The Cursed Child won the 2017 Olivier Award for Best New Play, captures the adrenaline, excitement, and energy of this real-life adventure.

Harper has reunited The Theory of Everything stars Eddie Redmayne and Felicity Jones and though it’s hardly going to sweep the Academy Awards, The Aeronauts makes no effort in aiming for statuettes. And why would it when it has a plot that literally aims for the stars?

It’s 19th Century London, where scientist James Glaisher (Redmayne) looks to break the world altitude effort. With Jones’ “Amelia Wren” in tow, Glaisher takes off in a soaring gas balloon.  Borrowing from Richard Holmes’ 2013 book Falling Upwards: How We Took to the Air, the film, like the book, is a love letter to an era where air travel proved routinely entertaining instead of just routine.

A great deal of the story is fabricated, but the film benefits from the half-truths. The entirely fictional “Amelia” replaces the real-life Henry Coxwell, and although that’s raised eyebrows in some corners of the Academic World, the excitement and joy Amelia experiences from the voyage offers a tasty contrast to Glaisher’s stuffier approach to the journey.“Do you take anything seriously?” he asks her, the answer tellingly obvious to him and the audience. Yesterday‘s Himesh Patel co-stars as fellow scientist John Trew, bringing more estimable diversity to this family film.

Patel is one of an impressive collection of “British Who’s Who” that pads out the film. Sitcom stars Anne Reid, Tim McInnerny and Rebecca Front complete a circle of family and friends, while the film offers a tasty throwback with actor Tom Courtenay (Dr. Zhivago) playing Glaisher’s father. Then there’s Vincent Perez as “Pierre Wren,” whose ghostly presence provides a context to Amelia’s desire to escape. The film doesn’t enter too heavily into the standing a woman aviator would have experienced in 1862. Similarly, the film ignores making a commentary about comparing primitive air designs to the planes that now fly on a daily basis.

What it does offer is a charming interplay between the two leads as they head on their own quest, forty thousand feet up in the sky. Entirely suited to the IMAX screen, the film’s strongest set pieces involve the lanky Redmayne cowering sheepishly in the basket as his daredevil co-pilot climbs effortlessly on the soaring vehicle. The special effects, often breathtaking, more than compensate for the shallow plot-line.

The scenery in The Aeronauts is irresistible. If the film doesn’t quite hit the heights it seeks, it cruises pleasantly among the stars.

0 comments on “The Aeronauts: A Real-Life Flight of Fancy”