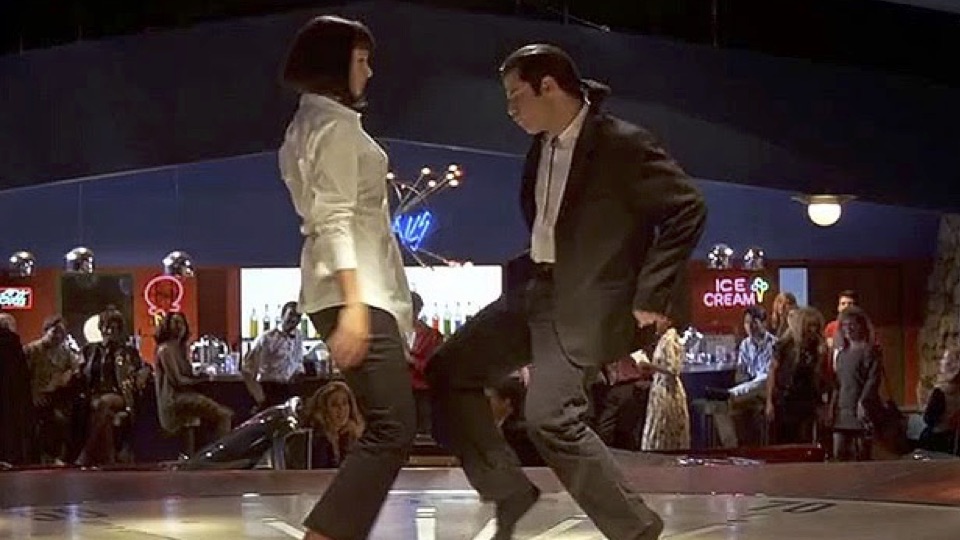 If you’re reading this, you’re likely passionate about and music and movies. The right song can create a “moment” that will forever have a home in our movie memories. For example, if you grew up watching the movie Arthur, just hearing the sound of Christopher Cross singing the theme song will also likely recall Dudley Moore’s drunken cackle of a laugh. So here’s a spotlight on some songs that made our favorite movie scenes, well, “our favorite scenes.”

Although the song appeared in the ‘80s movie Mannequin, (you probably remember Grace Slick’s big hair in the Starship video) “Nothing’s Gonna Stop Us Now” was used to perfection in the low-budget 2014 indie drama/comedy The Skeleton Twins. Kristin Wiig and Bill Hader star as two estranged twins struggling with feelings of depression and unfulfillment in their lives. After a failed suicide attempt, Hader’s “Milo” returns to his hometown to stay with Wiig’s “Maggie,” (and her clueless but likable husband, played by Luke Wilson.) You root for both characters to make it through the rut they’re both stuck in. Their whole relationship is captured in one glorious scene that shows just how much they know and need each other. In trying to cheer up Maggie, Milo lassos the hearts of moviegoers by performing a lip-synch to “Nothing’s Gonna Stop Us Now.” If you’re not smiling from ear-to-ear when Maggie joins in on the Grace Slick part, then you may just have a skeleton heart. This perfect moment is the ultimate mood-lifter.

There are two classic Harry Belafonte songs that Tim Burton chose for his hilarious,  absurd look at the afterlife in the time of Yuppies. Although “Jump in the Line” is a sing-along, shoulder-shaking way to close out Beetlejuice, “The Banana Boat (Day-O!)” song is instrumental in creating one of the funniest moments in this comedy classic. The dinner scene gives Catherine O’Hara the spotlight and her comedic talents shine throughout her character’s out-of-character lip-synch routine. Set up by a dinner conversation between Charles and Delia Deetz and their pretentious guests, (watch for the toast to “your buildings going condo”), O’Hara’s Delia bursts to life in animated glory. Unlike Beetlejuice, “Day-O!” is a sound so nice, you’ll want to say it thrice.

An American Werewolf in London is the 1981 horror-comedy classic that tells the story of two American friends, David (David Naughton) and Jack (Griffin Dunn) whose trip to the UK takes an unexpected turn after they get attacked by a werewolf. The movie earned cult classic status in the ‘80s for mixing horror with dark comedic moments. The soundtrack stands out throughout the film composed of numerous ‘50s and ‘60s jukebox classics with “moon” in the title, as well as two other very different versions of “Blue Moon” that open the film and close out the credits. It’s Sam Cooke’s mellow classic that juxtaposes the disturbingly realistic, terror of David’s transformation. His body violently morphing during the full moon cuts through the beauty of Cooke’s voice.

Let’s face it, even if you didn’t know the title of the song, all it takes is the opening wave of sound and the pulsing keyboards of The Cars’ “Moving in Stereo” to remind 40-somethings of the pool scene that made Phoebe Cates the fantasy of teen boys. Life was the same for Judge Reinhold’s “Brad,” as he was stuck in a rut of his own making. Director Amy Heckerling used an extended instrumental version of the song to set the dreamy tone of Brad’s fantasy. Judge Reinhold’s “doesn’t anybody knock anymore?” face is hilariously relatable to anyone who’s ever gone through puberty. The fact that he’s wearing a business suit in his erotic fantasy is still a wonderfully weird choice by Heckerling.

Related: “‘Baby Driver’ Is Music To Your Eyes…and Ears”

“You Never Can Tell”- Pulp Fiction

When Pulp Fiction hit theaters in 1994, it had audiences glued to every sharp word of dialogue delivered by the noirish but hilariously relatable characters in L.A.’s criminal underbelly. Quentin Tarantino’s fondness for rare, forgotten song choices, helped create some classic moments in the film. The entire scene at Jack Rabbit Slim’s is like stepping into a bizarro 1950’s universe and is the perfect light-hearted break in the film before the chaos that ensues. Twenty-five years later, it’s almost physically impossible not to break into the twist when you hear Chuck Berry’s “You Never Can Tell.” Not only was this a great excuse to remind people that “Vincent Vega” was being played by John Travolta, but it showed Uma Thurman looking cool as hell doing the “Bat-usi.”

If you had your first kiss in junior high with “Jessie’s Girl” playing in the background, it’s a sweet moment you’ll never forget. If you had your first junior high kiss, with the “Jessie’s Girl” /drug deal scene from Boogie Nights playing in the background, we hope you’ve gotten therapy. It’s just a perfect scene, from the choice of songs, to the direction and the acting of every person in the room. Especially, the brilliantly funny cameo by Alfred Molina, who’s the host with the most (cocaine) and knows how to rock a silk robe.

The slow buildup of tension in this crazy, “WTF are these idiots doing there?” moment, is palpable. The scene puts you on the couch with Dirk Diggler and Reed Rothchild. As Springfield sings, “Cause, she’s watching him with those eyes,” the camera focuses on Dirk’s face for the world’s most excruciating minute. You just know that something is about to go seriously wrong (and it does).

Pretty Woman may have been Julia Robert’s break-through role but 1997’s My Best Friend’s Wedding is likely the part that cemented her status as a  star whose career was going to last into the next decade. Roberts’ “Julianne” in My Best Friend’s Wedding was the first starring role that her fans could relate to. Wackiness ensues in this classic Rom-com when Julianne thinks she’s in love with her best friend after he announces his engagement to sweet Kimmy (Cameron Diaz). The stand-out scene is orchestrated by Rupert Everett as Julianne’s charming gay friend George. George takes great glee in making Julianne feel uncomfortable and wins over Kimmy’s family by telling the story of how he and Julianne met. He has the family oohing and aahing over their love story. It’s tough not to smile as George takes a dramatic pause before softly singing “…The moment I wake up…” kicking off a Dionne Warwick lovefest in the restaurant.

If you’re a fan of Harry Potter, then you know pop culture references, and specifically, songs from outside the wizarding world, don’t often make it into the books or the movies. Ron does not have a Pearl Jam poster above his bed, which is why when a little-known Nick Cave and the Bad Seeds song comes on the radio in Deathly Hallows: Part 1, you immediately take notice. This film removes the three friends from the comfort of Hogwarts and places them on the run, hiding out in desolate places, and dealing with their growing frustration in the quest for “horcruxes.”

After Ron storms off in a rage and Hermione is left distraught, Harry breaks the uncomfortable silence in their tent by turning up the radio. As Hermione and Harry slowly begin to dance, they put their troubles aside for a moment before the weight of the wizarding world sets in. As the mood gets lighter, Cave’s powerful voice can be heard getting louder along with the uplifting chorus singing “Hey ma, we’re jumping on, the train that goes, to the kingdom.” The song seems to embody both a sense of farewell and a hopeful message of perseverance. It urges future generations to embrace the beauty in life, which is why it’s such a brilliant choice to create a sweet moment of reflection for the characters as their journey is coming to an end.

“Johnny B. Goode”- Back to The Future

“Johnny B. Goode” is an “oldie …where I come from” and as Marty McFly tells the stunned dance-goers, “your kids are going to love it.” Back to the Future fans don’t need a Delorean to go back to 1955. They only need to hear the opening guitar licks of this classic to be reminded of Michael J. Fox as “Marty McFly,” exciting the crowd at the school dance. This scene and the song are forever linked and it’s a clever nod to Chuck Berry, one of the originators of rock n’ roll.

Despite being one of Elton John’s biggest hits, if you saw Almost Famous in 2000, “Tiny Dancer” still brings you back to the scene on the bus. This movie is a love letter to music and to those who love it. At its heart, it’s a coming-of-age story about a teenage writer who gets caught up in the circus of following his favorite band on tour. It’s almost impossible to watch the scene without joining in when “Hold me closer, tiny dancer” kicks in. Everyone on the bus is briefly reminded of why they do what they do. More importantly, the audience sees this world of rock through the eyes of William Miller (Patrick Fugit), an outsider along for the ride, who’s coming into his own through his passion for music.

Back in 1992, Mike Myers had to fight to get “Bohemian Rhapsody” into his movie. This hilarious moment wouldn’t have been the same with any other song. Not only is it Queen’s rock opera classic, it’s exactly the song that two guys would play in the tape deck of a 70s-era Gremlin. Besides, there aren’t many iconic rock songs long enough to give Wayne and Garth enough time to stop, pick up a sick friend from the side of the road, stop again, wait for Wayne to gaze at his dream guitar through the window of a music shop, get back in the car, and headbang, right at the song’s epic peak.

0 comments on “9 Songs That Made Our Favorite Movie Scenes”