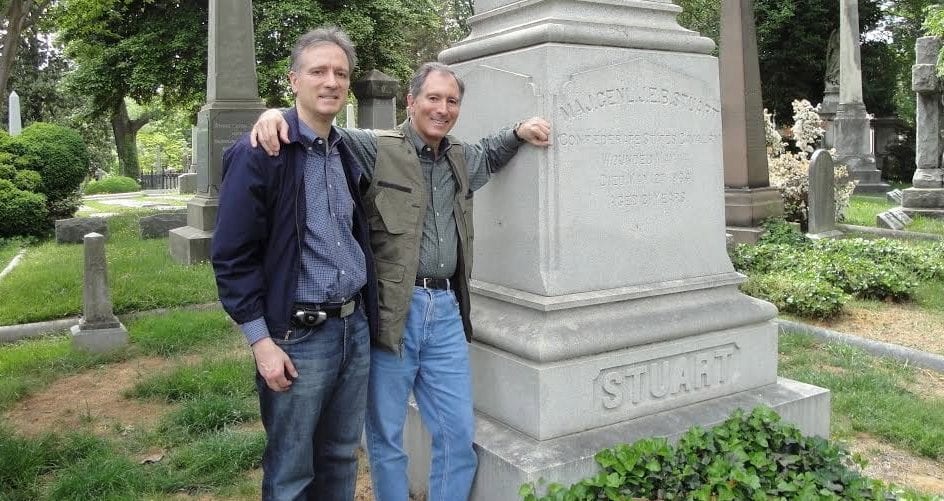 Many brothers share a passion for music. Some brothers even play music together. But brothers Vincent and Robert Gardino are much more unique than that. These two music-loving siblings visit the graves of famous musicians — and other celebrities — at cemeteries all over the world. It’s a hobby that, aside from yielding some engaging anecdotes (especially suited to Halloween), has led the two Gardinos a.k.a. “Grave Trippers” to create their own TV series. So which musician has the coolest gravestone and which rocker’s resting place is the most popular? Read the interview below to find out.

Q: Your father used to bring home autographs from Danny’s Hideaway where he worked. What musicians’ signatures did you end up getting? Any that you’re particularly fond of?

A: Our father brought home, from his work at Danny’s Hideaway, the autographs of Ricky Nelson, Count Basie, Jim Nabors and a few others from the musical side of the entertainment industry. We would have to say our favorite, by far, would be the autograph of Dean Martin. Our father told us that Dean Martin was very accommodating, and came across just like he did on TV, easygoing and with a twinkle in his eye.

Q: Woodlawn cemetery actually is now home to a few late jazz greats. Do you know how that came about? Who’s up there?

A: The Jazz Corner, as it has been come to be known as, at Woodlawn Cemetery in the Bronx, New York, began when Duke Ellington passed away and was buried there in 1974. It was the wish of a number of Ellington’s friends and admirers in the jazz music industry that when their time came they wished to be buried near where the Duke’s grave was located. Some of those now buried near Ellington include Miles Davis, Lionel Hampton, Illinois Jacquet, and Max Roach.

Q: Have you traveled abroad to visit cemeteries? Are there classical composers of note whose graves you’ve visited?

A: We have visited cemeteries in Paris, as well as in Milan. We have seen the final resting places of classical music greats Chopin, Rossini, and Arturo Toscanini.

Q: In Paris, Serge Gainsbourg’s tombstone has been known to attract small crowds of women. What musician’s resting place is the most trafficked in your experience?

A: Very easy. Jim Morrison at Pere Lachaise cemetery in Paris. No need to follow any map, just follow the people that go to his grave and voila you are there.

Q: Which musician had the coolest gravestone or mausoleum you’ve ever seen? What made it so special?

A: The coolest mausoleum we have to say that we have seen was Arturo Toscanini’s at Cimitero Monumentale in Milan. It is an architectural masterpiece that is relatively small as far as tombs go. However, it is elaborately designed with angels carved into the sides of the edifice. Even the iron gates that close the tomb are decorated with musical notes.

Q: Have you ever discovered the gravesite of a musician that you weren’t expecting to encounter? Who was it and where?

A: We would have to say when we stumbled upon the grave of renowned classical pianist Sergei Rachmaninoff at Kensico cemetery located in Westchester NY.

Q: What kind of music would you like played at your own funeral?

A: As Elvis fans we both have to say “How Great Thou Art,” and yes we have been to Elvis’ grave in Graceland. In addition we would appreciate the playing of “Ave Maria.”

Visit GraveTrippers.com to learn more about the Gardino brothers’ adventures.

Photo Credit: Image of Robert and Vincent Gardino courtesy of the subjects

0 comments on “The Grave Truth About Music Icons”